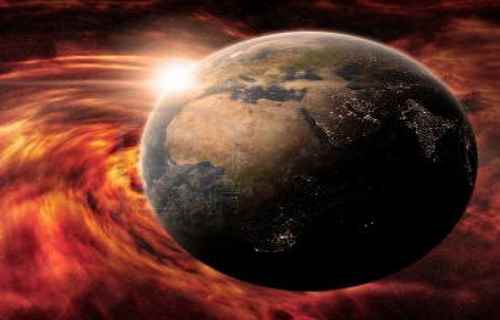 Don’t Stick Your Head In the Sand; Open Your Eyes So You Can Prepare For What’s Coming

Planet earth… is beginning its final days. Like the birthpangs of a woman in hard labor, with each passing day, the turbulence increases. Unrest has swept the globe. Fear plagues us. Freedom is dying. We are headed for a worldwide financial meltdown, maybe a global flu pandemic, marshal law, civil wars, and the poisoning of our planet from nuclear radiation.
Yes. Frightful events are right around the corner. Multiple chaotic scenarios are now threatening every living thing on earth. And if you are not apprehensive about the future, you are simply not paying attention.
Just remember the last century. Nazi Germany, Communist China, the Soviet Union, Cambodia, Bosnia. Worldwide holocausts, genocides, ethnic cleansings and massive murder. The numbers boggle the mind. Governments murdered at least 100 million of their OWN people. Count on it happening again … and again. Because history always repeats itself.
You see, power is a drug that lures psychopathic personalities into politics. Psychopaths advance because they can be charming, persuasive and even funny. But they’re also ruthless and have no qualms about truth twisting to steal an election. They won’t hesitate to break the law, because they believe they’re above any law written by man—or God. If they can get away with murder, they will. Even though they fake it well, such men and women have no real conscience.
It’s hard to fathom these people. Many of the members of the secretive shadow government organizations believe the world is over populated. They want to reshape society into a totalitarian system of their own design, with a dramatic reduction in world population. How will they achieve that? By orchestrating events which will take billions of lives! Believe it or not, they are already working on ways to sterilize much of the world and also to unleash so-called “natural disasters” like a swine flu or ebola pandemic. Killing billions would mean nothing to a pure psychopath, because—after all—it’s for the “greater good”.

So if you are sitting in front of your television set, oblivious to the ramifications of what’s happening around us, you are in for a brutal awakening. We all need to open our eyes. Because life as we know it is about to be turned … upside down. Evil is about to attack us from the blind side. Hideous calamities are being planned in the corridors of power. These events will be made to appear like natural plagues, or accidents, or the work of unknown terrorists—but you can be sure that psychopathic bureaucrats running our largest countries will be orchestrating what’s coming.

Today’s traumatic events were actually pictured thousands of years ago. The ancient Hebrew prophets penned many amazing details about the events of the last days on planet earth. Do you know that 25% of the Bible is prophecy? No other book, ancient or modern, has so many accurate predictions, many of which are coming true Right Now.

If you want real insight about the future, and about life, this is the best place to start. To escape the coming destruction on earth, and in the life to come, you’ll want to heed the warnings and see what’s happening from God’s point of view. On this site we’ll point you to many of the key prophecies that are coming to pass as we speak.

If you sit back in your easy chair and do nothing, evil is extremely likely to creep up upon you and your family before you realize its even there. You want to be prepared because you can protect yourself and your family. You really want to become part of the solution rather than just another faceless victim.

This website offers honest answers that will lead you to specific solutions. The world is desperate for a revolution of a different kind; a radical moral revolution that changes one person at a time. Collectively our revolution is more powerful than the world’s past revolts all put together. We’ll show you how to work together to bring about this radical approach to life right here on this website.

I’m personally committed to empowering you to find your place in this revolutionary movement with your own unique plan to ward off the coming evil and destruction. So take some time to get involved.

There are three main sections in Fresh Light Source. If you’re a seeker or a skeptic, then you need answers. Clicking theSeekers Link will take you to growing list of helpful pages which offer practical answers for conquering both life and death issues.

If you’re a believer in Christ, you also will need help in these last days. Christians must band together and let our radical revolutionary message shake the gates of hell. Clicking theBeliever’s Button will take you to messages and other tools (as we produce them) to energize your life and ministry.

Third, we have an End Times Section that is designed to give you links and articles and links to other articles off this website that will keep you informed about what is happening. Check this out on a regular basis to see what’s going on.

I promise to shoot straight with you on this website. No games. No politically correct answers here. Just the powerful articles that you will want to be exposed to. These are essential messages about what’s coming and how to overcome the difficulties ahead. (SOURCE )

The END OF DAYS predictions for 2017 are already starting to come in hot now that the elections are almost upon us. So far, the 2016 predictions are looking fairly interesting. While World War 3 fears have become common due to saber rattling by China and Vladimir Putin’s Russia, some people are combining the 2016 Nostradamus predictions with Bible prophecies related to Jesus and the Antichrist’s end times. Throw a giant asteroid into the WW III mix, and these 2016 conspiracy theories are certain to be a blast.

In a New related report by the Reporter, the U.S. military is preparing their WMD bio-weapon defense teams for 2017 for a potential end of the world threat, but early efforts in the training eerily resemble the fiction related to a zombie apocalypse virus.

The last two years have not been good to end of the world predictions. There were multiple 2015 asteroid impacts that proved to be untrue, some tried to claim the Mayan calendar actually ended in May of 2015. End times predictions have always been a tricky subject since Jesus said, “But about that day or hour no one knows, not even the angels in heaven, nor the Son, but only the Father.” Regardless, many Christians have attempted to use other prophecies in order to guess the time frame in which the Antichrist may usher in the end of the world.

If the apocalypse is around the corner, then some of the more well-known, modern figures in Christianity may have something to say. Pat Robertson has famously claimed that he believes an asteroid will impact the Earth in March, but he hasn’t specified an exact date. Perhaps the most famous evangelist of them all, Billy Graham, just states there is “great confusion, related to Christian end times theology. The more I listen to the news of what is going on in the world, and in the church, there is great confusion about the end times,” he said, according to Christian News. “Some people wonder how to get to heaven and others don’t seem to care if they wind up in hell. God has a lot to say about this, and He has not kept His promises hidden…”

What does this mean to you? Do you believe we are fast approaching an Apoplectic future here on earth?