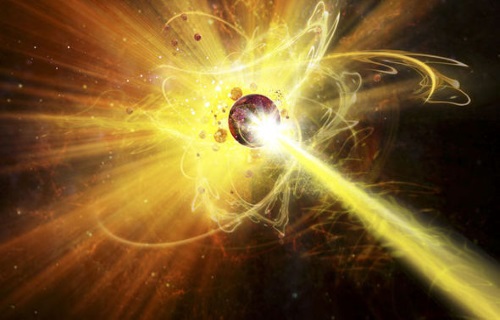 Given a legitimate need to protect Earth from the most intense forms of space weather – great bursts of electromagnetic energy and particles that can sometimes stream from the sun – some people worry that a gigantic “killer solar flare” could hurl enough energy to destroy Earth, but this is not actually possible.

Solar activity is indeed currently ramping up toward what is known as solar maximum, something that occurs approximately every 11 years. However, this same solar cycle has occurred over millennia so anyone over the age of 11 has already lived through such a solar maximum with no harm.

This is not to say that space weather can’t affect our planet. The explosive heat of a solar flare can’t make it all the way to our globe, but electromagnetic radiation and energetic particles certainly can. Solar flares can temporarily alter the upper atmosphere creating disruptions with signal transmission from, say, a GPS satellite to Earth causing it to be off by many yards. Another phenomenon produced by the sun could be even more disruptive. Known as a coronal mass ejection or CME these solar explosions propel bursts of particles and electromagnetic fluctuations into Earth’s atmosphere. Those fluctuations could induce electric fluctuations at ground level that could blow out transformers in power grids. A CME’s particles can also collide with crucial electronics onboard a satellite and disrupt its systems.

In an increasingly technological world, where almost everyone relies on cellphones, and GPS controls not just your in-car map system, but also airplane navigation and the extremely accurate clocks that govern financial transactions, space weather is a serious matter.

But it is a problem the same way hurricanes are a problem. One can protect oneself with advance information and proper precautions. During a hurricane watch, a homeowner can stay put … or he can seal up the house, turn off the electronics and get out of the way. Similarly, scientists at NASA and NOAA give warnings to electric companies, spacecraft operators and airline pilots before a CME comes to Earth so that these groups can take proper precautions.

NOAA’s Space Weather Prediction Center (http://swpc.noaa.gov) is the U.S. government’s official source for space weather forecasts, alerts, watches and warnings. Improving these predictive abilities the same way weather prediction has improved over the last few decades is one of the reasons NASA studies the sun and space weather. We can’t ignore space weather, but we can take appropriate measures to protect ourselves.

And, even at their worst, the sun’s flares are not physically capable of destroying Earth.

Solar flares are giant explosions on the sun that send energy, light and high speed particles into space. These flares are often associated with solar magnetic storms known as coronal mass ejections (CMEs). The number of solar flares increases approximately every 11 years, and the sun is currently moving towards another solar maximum, likely in 2013. That means more flares will be coming, some small and some big enough to send their radiation all the way to Earth.

The biggest flares are known as “X-class flares” based on a classification system that divides solar flares according to their strength. The smallest ones are A-class (near background levels), followed by B, C, M and X. Similar to the Richter scale for earthquakes, each letter represents a 10-fold increase in energy output. So an X is ten times an M and 100 times a C. Within each letter class there is a finer scale from 1 to 9.

C-class and smaller flares are too weak to noticeably affect Earth. M-class flares can cause brief radio blackouts at the poles and minor radiation storms that might endanger astronauts.

And then come the X-class flares. Although X is the last letter, there are flares more than 10 times the power of an X1, so X-class flares can go higher than 9. The most powerful flare measured with modern methods was in 2003, during the last solar maximum, and it was so powerful that it overloaded the sensors measuring it. The sensors cut out at X28.

The biggest X-class flares are by far the largest explosions in the solar system and are awesome to watch. Loops tens of times the size of Earth leap up off the sun’s surface when the sun’s magnetic fields cross over each other and reconnect. In the biggest events, this reconnection process can produce as much energy as a billion hydrogen bombs.

If they’re directed at Earth, such flares and associated CMEs can create long lasting radiation storms that can harm satellites, communications systems, and even ground-based technologies and power grids. X-class flares on December 5 and December 6, 2006, for example, triggered a CME that interfered with GPS signals being sent to ground-based receivers.

NASA and NOAA – as well as the US Air Force Weather Agency (AFWA) and others — keep a constant watch on the sun to monitor for X-class flares and their associated magnetic storms. With advance warning many satellites and spacecraft can be protected from the worst effects.