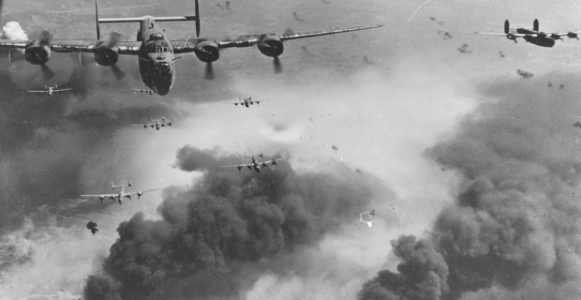 What Was the Great Depression?

The Great Depression, which lasted from 1929 to the early 1940s, was a severe economic downturn caused by an overly-confident, over-extended stock market and a drought that struck the South. In an attempt to end the Great Depression, the U.S. government took unprecedented direct action to help stimulate the economy. Despite this help, the Great Depression finally ended with the increased production needed for World War II.

After nearly a decade of optimism and prosperity, the United States was thrown into despair on Black Tuesday, October 29, 1929, the day the stock market crashed and the official beginning of the Great Depression. As stock prices plummeted with no hope of recovery, panic struck. Masses and masses of people tried to sell their stock, but no one was buying. The stock market, which had appeared to be the surest way to become rich, quickly became the path to bankruptcy.

And yet, the Stock Market Crash was just the beginning. Since many banks had also invested large portions of their clients’ savings in the stock market, these banks were forced to close when the stock market crashed. Seeing a few banks close caused another panic across the country. Afraid they would lose their own savings, people rushed to banks that were still open to withdraw their money. This massive withdrawal of cash caused additional banks to close. Since there was no way for a bank’s clients to recover any of their savings once the bank had closed, those who didn’t reach the bank in time also became bankrupt.

Businesses and industry were also affected. Having lost much of their own capital in either the Stock Market Crash or the bank closures, many businesses started cutting back their workers’ hours or wages. In turn, consumers began to curb their spending, refraining from purchasing such things as luxury goods. This lack of consumer spending caused additional businesses to cut back wages or, more drastically, to lay off some of their workers. Some businesses couldn’t stay open even with these cuts and soon closed their doors, leaving all their workers unemployed.

In previous depressions, farmers were usually safe from the severe effects of a depression because they could at least feed themselves. Unfortunately, during the Great Depression, the Great Plains were hit hard with both a drought and horrendous dust storms, creating what became known as the Dust Bowl.

Years and years of overgrazing combined with the effects of a drought caused the grass to disappear. With just topsoil exposed, high winds picked up the loose dirt and whirled it for miles. The dust storms destroyed everything in their paths, leaving farmers without their crops.

Small farmers were hit especially hard. Even before the dust storms hit, the invention of the tractor drastically cut the need for manpower on farms. These small farmers were usually already in debt, borrowing money for seed and paying it back when their crops came in. When the dust storms damaged the crops, not only could the small farmer not feed himself and his family, he could not pay back his debt. Banks would then foreclose on the small farms and the farmer’s family would be both homeless and unemployed.

During the Great Depression, millions of people were out of work across the United States. Unable to find another job locally, many unemployed people hit the road, traveling from place to place, hoping to find some work. A few of these people had cars, but most hitchhiked or “rode the rails.”

A large portion of the people who rode the rails were teenagers, but there were also older men, women, and entire families who traveled in this manner. They would board freight trains and crisscross the country, hoping to find a job in one of the towns along the way.

When there was a job opening, there were often literally a thousand people applying for the same job. Those who weren’t lucky enough to get the job would perhaps stay in a shantytown (known as “Hoovervilles”) outside of town. Housing in the shantytown was built out of any material that could be found freely, like driftwood, cardboard, or even newspapers.

The farmers who had lost their homes and land usually headed west to California, where they heard rumors of agricultural jobs. Unfortunately, although there was some seasonal work, the conditions for these families were transient and hostile. Since many of these farmers came from Oklahoma and Arkansas, they were called the derogatory names of “Okies” and “Arkies.”

Roosevelt and the New Deal

The U.S. economy broke down and entered the Great Depression during the presidency ofHerbert Hoover. Although President Hoover repeatedly spoke of optimism, the people blamed him for the Great Depression. Just as the shantytowns were named Hoovervilles after him, newspapers became known as “Hoover blankets,” pockets of pants turned inside out (to show they were empty) were called “Hoover flags,” and broken-down cars pulled by horses were known as “Hoover wagons.”

During the 1932 presidential election, Hoover did not stand a chance at reelection andFranklin D. Roosevelt won in a landslide. People of the United States had high hopes that President Roosevelt would be able to solve all their woes. As soon as Roosevelt took office, he closed all the banks and only let them reopen once they were stabilized. Next, Roosevelt began to establish programs that became known as the New Deal.

These New Deal programs were most commonly known by their initials, which reminded some people of alphabet soup. Some of these programs were aimed at helping farmers, like the AAA (Agricultural Adjustment Administration). While other programs, such as the CCC (Civilian Conservation Corps) and the WPA (Works Progress Administration), attempted to help curb unemployment by hiring people for various projects.

The End of the Great Depression

The major turn-around for the U.S. economy occurred after the bombing of Pearl Harbor and the entrance of the United States into World War II. Once the U.S. was involved in the war, both people and industry became essential to the war effort. Weapons, artillery, ships, and airplanes were needed quickly. Men were trained to become soldiers and the women were kept on the homefront to keep the factories going. Food needed to be grown for both the homefront and to send overseas.

It was ultimately the entrance of the U.S. into World War II that ended the Great Depression in the United States.

The idea that the Great Depression was finally brought to an end by the onset of WWII has been a staple of history textbooks, documentaries and various war propaganda for decades. This myth continues to be perpetuated to the present day.

The idea that war is good for the economy is, needless to say, a fallacious argument which itself is based on incorrect economic data.

How to Prepare for an Economic Depression: Gerald Celente PREDICTS The Worst Great Depression In The History

Charles Nenner Warns : The Coming Market Crash will be much worse than what people think !! Everyone Should Be Prepared | The Statistics Are Frightening ( Coming Economic Crash Will be WORSE Than Great Depression )