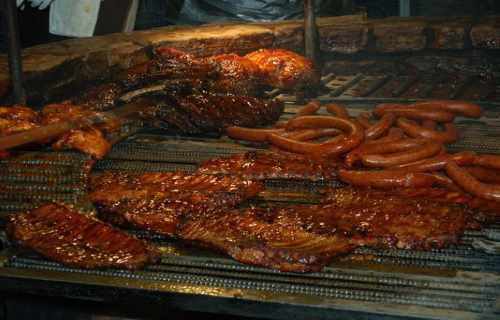 When we talk about the pioneers, it is usually as people who sought out a better life where they could exercise their religion in freedom. In focusing on their pursuit of freedom, we often gloss over the fact that the early pioneers were incredibly brave…

And also incredibly self-sufficient. Pioneer life was not easy and the daily chores of managing a house where more than a full time occupation. Cooking was a major part of each day. Early settlers butchered their own meat and made corned beef, sausage, smoked and dried meats. Large gardens yielded produce for canning, pickling and other preserves. Root cellars stored potatoes, carrots, and onions. Milk was separated into cream for butter and baking and milk for drinking. Breads, cakes and pies were of course all baked at home from scratch from whatever was available.

For the most part meals were informal and the food hearty. Nothing was wasted. Dried bread was made into bread pudding; a bone was turned into soup and extra milk was made into pudding or cheese. Often there was a shortage of some ingredient. As you will see from the recipes, many are based on very basic ingredients and several on how to make a meal with only a few ingredients. Recipes would not only be for food but also for perfume, home remedies, wine and soap making.

Recipe books were not common and cooking was very much a passed down art or trial and error. It is interesting to read recipes from this period, as often they are vague and written with a few small hints that only the person who wrote them would understand. The three day bun recipe and by guess by gosh gingerbread are good examples of this.

There were hardly any stores along the Oregon Trail (or the numerous other pioneer trails) where they could pick up provisions. They had to know how to forage their own food and cook meals out of practically nothing.

It truly is hard to imagine how they successfully fed themselves. When I started to research this article, I was surprised by the variety of foods. Although basic there was still a vast number of recipes to choose from. I was also surprised by the ingenuity of the recipes like Mock Apple Pie and Butterless, Eggless, Milkless Cake and by the fact that I and many other prairie people still commonly make some of these recipes like boiled raison cake and cookies. It proves that these recipes although practical in the past still are alive today because of their flavour.

Even once they were settled, the pioneers still had to be resilient. A single storm could take out half a year’s of food supplies. There wasn’t any refrigeration and even home canning didn’t become common until later (which, of course, you’d need access to jars to do!).

I personally find all aspects of pioneer life fascinating: how they organized labor, how they handled medicine, how they built their homes…

But how the pioneers ate is one of the most fascinating aspects of their life. It gives you insight into how creative and hard-working they were in their endeavors to sustain their families in tough situations.

Bread: The pioneers didn’t have packages of yeast. They usually made their bread with the “salt-rising” method. The bread dough was mixed in a kettle while they were traveling. Natural bacteria in the dough would make it rise. Then the dough was baked in the kettle over a campfire at night. Read more about it here.
Cured Meat: Without refrigerators, meat was preserved either by smoke curing or salt curing. To salt cure meat, salt was rubbed into the meat. The meat was then covered with salt for about 1 month, during which time more salt was continuously added. Bacon was a particular favorite of the pioneers. More about food preservation here.
Cornmeal, dried corn: The pioneers brought along dried corn and would grind it into meal to make cakes and breads.
Lard: Forget fancy olive oil! The pioneers used fat from animals to cook their food. It was a staple on the trail.
Eggs: Pioneers on the Oregon Trail did bring chickens along in crates tied to the backs of their wagons. However, it is doubtful that they laid eggs in the bumpy, stressful conditions. Eggs were mostly used in pioneer recipes once they got settled.
Rabbits, squirrels and small game: These could be easily hunted along the way.
Squash: Squash, such as pumpkins, don’t spoil quickly and can also be found growing in the wild. The pioneers would make mashes and cakes out of them.
Dried fruit: To dry fruit, pioneers would lay the sliced fruit out in the sun.
Tubers (potatoes, turnips, etc.): These were also a pioneer favorite because they lasted a long time without spoiling. Tubers could also be foraged easily on the frontier.

Spread 3/4 inch thick in a pan and bake slowly for 20 minutes. Remove while hot. Cut in squares. Roll in icing sugar.>

It is hard to tell this is not apple pie. Texture is the only give away!

Boil in a pan:

Line your pie plate with pastry. Break 14 soda crackers into the plate and pour the boiled mixture over them. Cover with top crust and bake 45 minutes at 350°F (180°C).

Amazingly this works. However, it is best eaten fresh out of the oven.

Boil the above together for 3 minutes. Let cool. The add:

During pioneer times lemons usually were very scarce. In order to satisfy their taste for lemon pie, women learned to use the pink-flowered sheep sorrel that grew wild on the prairie as a substitute for lemons. They used a regular lemon pie recipe but substituted a cup of shredded sheep sorrel for the lemons. The pie has a tart lucious flavour, similar to real lemon pie.

Pioneer recipes were seldom as specific as recipes today but this one has me puzzled. She wrote, “I always take some flour, just enough for the size of the cake I want to bake. I mix it up with some buttermilk if I happen to have any around, just enough for the flour. Then I take some ginger; some like more, some like less. I put in a little salt and pearl ash, and then I tell one of my children to pour in molasses until I tell him to stop. Then the children bring in wood to build up a good fire and we have gingerbread for company”. No doubt Grandma got better results from this recipe than I would.

Spread fresh, unsalted butter on two plates of the same size. Then fill one plate with roses, jasmine, violets or any other flowers you wish. Turn the other plate over it and let stand for 24 hours. Then scrape off the butter from the plate and add a little alcohol or whiskey. Cork tightly.

Note: This must have been the equal of “My Sin” or “Parisian Nights” for anybody’s money in the pioneer days.

For Spring Fever: For curing ” Spring Laggin’s” is the interesting title for this recipe I found in my Grandma’s “receipt” book. “Take sasparilla, yellow dock, black alder bark, burdock root, sassafras bark, wintergreen. Of each, one ounce mixed with four pints of syrup. A wine glass of this three times a day.

“Food for a Barn Raising”

This bit of information was found in a quaint, old handwritten recipe book from great grandmother’s day. It included here mainly for the purpose of giving us a peep into the past. As many of us know, a “barn raising” was quite an event during those early years. When a new barn was built, all the friends and neighbours came on the specified day to help put up the framework of the barn. This policy is still carried out in some communities where neighbours are neighbourly. Homemakers of our day will no doubt be astounded at all the food consumed in one day. What is more difficult to believe is that it was all made in great grandmother’s kitchen. Here is the list:

Simmer the raisins and water for a few minutes. Cool. Mix butter, sugar, eggs, and vanilla. Add the raisin juice. Sift the dry ingredients together and add to other mixture. Stir. Fold in raisins. Pour into a greased, floured 9 x 13 inch (3.5 L) cake pan and bake at 350°F (180°C) for 40 minutes. Cover with Caramel Icing.

Trim fat from meat. Place pieces of the fat in a heavy pan to render fat. Discard the dried bits. Brown meat in fat (add lard if there is not enough). Remove meat and brown onions. Return the meat to the pan. Add flour and paprika. Stir well. Continue cooking for a few minutes. Add the tomatoes, beer, Worcestershire sauce, stock, bay leaves, parsley and thyme. Cover and bake in a 300°F (150°C) oven or simmer on top of the stove for 3 hours, until meat is tender. Add mushroom, salt and pepper. Pour stew into a 3 quart casserole or two smaller casseroles. Serves 8 to 10.

Source: Come ‘n Get it At the Ranch House by B.M. Barss

Source: Come’ n Get it Cowboys and Chuckwagons by B.M.Barass.

In a jar shake together vinegar, oil, sugar, and salt. Add to cabbage and mix. Refrigerate for several hours.

Old-time gardeners were ahead of their time! Their ideas for wildflower gardens, children’s gardens, organic pest controls, decorating with houseplants, healing with herbs, and more are at the forefront of modern gardening trends. Take a look back to the future of gardening with this incredible collection of gardening advice from successful 17th-, 18th-, 19th-, and early 20th-century gardeners.

Early gardeners knew what they were doing–they had to, since they depended on their plants for food, medicine, home decorations, and recreation! Whether you’re growing vegetables, flowers, herbs, fruits, trees, shrubs, wildflowers, houseplants, or lawn grass, these old-time tips will help you get the most out of your plantings. Do you want a lusher lawn? How about more beautiful flowerbeds or hints for making your yard look bigger? You’ll find all that and more in Old Time Wisdom.

Old-Time Wisdom” boxes present early gardeners’ best planting notions.
* Tried-and-true recipes from early kitchens will tickle your tastebuds.
* “Strange but True” boxes reveal weird, wacky, and wonderful gardening techniques.
* A source list makes it easy to locate wonderful old-time plants.
* Authentic old-time illustrations take you back to a time when garden tips were on everyone’s lips.
* A “Recommended Reading” list guides you to more great ideas from the past.

How To Preserve Food For Winter Like The Pioneers

Pioneers Skills (Lard the Cooking Fat Every Homesteader Must Should Know)

30 Lost Ways of Survival from 1880 We Should All Learn