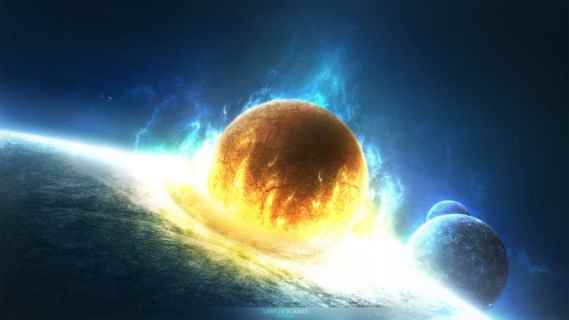 Is the cause of all this extreme weather to be found in outer space?
Planet X Nibiru A planet four times the size of gas giant Jupiter, killed off the dinosaurs. Although they believe it will not hit, the modern-day Nostradamus are convinced its huge gravitational pull will shift Earth’s continents and cause huge tsunamis – before the world is belted by fiery comets following in Nibiru’s wake that will see the planet burn.

Speculating and theorizing about the existence of yet undiscovered planets in our solar system has been bounced around for centuries. Prior to each new discovery of another outer planet has come detection of anomalies in the erratic, inexplicable motions of the outermost known planet. For instance, before Neptune’s existence was determined, for decades astronomers had been theorizing that Uranus’ (discovered in 1781) irregular movement may have been caused by the presence of yet another undiscovered planet. Indeed that was the case in 1846 when Neptune was first sighted and identified.

The now dethroned ninth planet Pluto discovered in 1930 (relegated in 2006 to minor dwarf planet status) and Pluto’s later found moon Charon were then used to explain the observed “wobbles” in Uranus and Neptune’s respective orbits. Thus, errors in calculating precise positions of known planets hold an enduring pattern of later confirmation of cause determined by each newly discovered planet. Hence, for over a century scientists have debated that yet more major planets and dwarf planets belonging to our solar system are still out there in space waiting to be found and existing anomalies to be explained.

Way back in 1940 Chilean astronomer Carlos Munoz Ferrada predicted accurately that the powers-that-be would attempt to cover-up Planet X when it comes barreling towards the earth. Ferrada referred to Nibiru/Planet X as a “Comet-Planet” because it has the size of a planet but speed and elliptical orbit of a comet.
Also in 1992 a confident NASA scientist named Ray T. Reynolds went on record proclaiming, “Astronomers are so sure of the 10th planet they think there is nothing left but to name it.” NASA at that time did everything but scream “Nibiru!” from the mountaintops.

But ever since Harrington’s untimely death with few exceptions, the lid has been tightly sealed on any more accurate information released by mainstream sources directly to the public. Apparently the US government had made the decision to keep Nibiru and its projected earthly destruction under wraps. In recent years the feds have sent out trolls to disseminate disinformation and false propaganda in attempts to debunk any would-be truth-tellers. The elite ensure that hired shills are planted to busily churn out concentrated disinfo campaigns smearing lies to prevent the story that never quite goes away from ever having full disclosure.

Hyped up predictions of past non-event disasters are most common, like the recent predicted May 28th San Andreas earthquake purposely timed with the opening of the film of the same name, or the 2012 Mayan calendar doomsday non-event, or the 5/5/2000 ice age that never cometh, and who can forget theY2K fiasco, and on and on so it goes. The more of these “end days” predictions that are proven to be false, the more chance that any legitimate warnings of Planet X will be summarily scoffed at and ignored. The “boy who cried wolf” syndrome effectively desensitizes the human population into doubting any actual evidence or truth about Nibiru will ever be taken seriously by any reasonably sane person, notwithstanding the “aluminum foil hat” crowd of conspiracy realists who are more often right than wrong these days when it comes to exposing the myriad of government cover-ups, false flags and lies.

The brown dwarf, Nemesis, is reported to be located just about 60 to 66 AU (1 AU=the distance from the Sun to Earth) from us (its perigee), currently in the direction of the constellation Sagittarius. Because of periodic gravitational disturbances in areas of space further out, specifically in the Oort Cloud, G1.9 travels in an elliptical orbit extending possibly hundreds of AU beyond the furthest known planets (its apogee). Its position just beyond Pluto suggests it is near its closest approach to the Sun and Earth.

So what will happen when Nibiru passes Earth by the end of the year? Well, according to Moore, Nibiru will cause a pole shift. The shift he says, will cause the poles to move by 20 to 50 degrees. John Moore has interviewed dozens of US Navy submarine and surface fleet veterans on the subject of rapid global sea level rise, gleaning information from the questions he asks, questions the main stream media is afraid to ask. His investigative prowess has allowed him to produce two major videos on the subject of Planet “X”; videos that are backed up by diligent research, documented history and scientific fact.