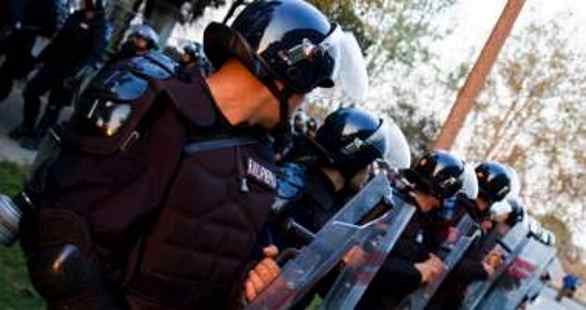 Violence. Rioting. Looting. Economic collapse and civil unrest. This isn’t a dystopian movie plot, but something else according to an economist with a good track record for prognostication: America’s dark future.

The economist is Martin Armstrong, whose correct predictions include the 1987 Black Monday crash and the 1998 Russian financial implosion. And now he’s predictingcivil unrest in America by 2016, precipitated by an economic collapse which he calls “the magic ingredient.” “Turn the economy down,” he continued, “and you get civil unrest and revolution.”

In addition, however, in a post that seems highly visceral but still expresses an important truth, Armstrong speaks of other contributing factors. Writing how “laws in the US have really gone nuts” and citing the recent case of a 90-year-old Floridian arrested for feeding the homeless, he writes:

You just cannot make up this stuff. And the Democrats cannot figure out that the people are getting p[*****]-off at who is ever in office? And what about the police? Is this just turning into thugs with badges who just enforce whatever law some nut-job politician writes? What if they passed a Herod type law to curb population and decree that everyone must kill their first-born? When does reason ever return to the police force these days? They no longer protect the people — they protect the politicians against the people.

In fact, the nonagenarian Good Samaritan’s plight isn’t even the most striking example of laws gone wild. We’ve also heard about a six-year-old charged with sexual harassment for giving a little girl a peck on the cheek, children’s lemonade stands shuttered by police for being “unlicensed,” and young schoolboys suspended for shaping fingers or Pop-Tarts like guns.

But while little citizens’ use of imaginary weapons is verboten today, Big Brother’s use of real ones is a different matter. As Infowars Paul Joseph Watson writes about Armstrong’s prediction:

As we reported back in August, the U.S. Army is preparing for civil unrest in the United States. A 132-page document entitled U.S. Army Techniques Publication 3-39.33: Civil Disturbances outlines how troops may be required to deal with “unruly and violent crowds” where it is “necessary to quell riots and restore public order.”

However, more widespread dislocation is only likely to occur in the aftermath of an economic collapse which impacts a huge number of Americans. As we have seen in numerous countries across Europe, including in Belgium just today, crippling austerity measures combined with anemic economic growth have set the stage for violent unrest.

And what would precipitate our economic collapse? Many observers have warned that our runaway spending and loose monetary policy constitute a ticking time-bomb. An apocryphal passage that became quite popular after the 2000 election explains this phenomenon well:

A democracy cannot exist as a permanent form of government. It can only exist until the people discover they can vote themselves largess out of the public treasury. From that moment on, the majority always votes for the candidate promising the most benefits from the public treasury, with the result that democracy always collapses over a loose fiscal policy — to be followed by a dictatorship.

Many would respond that this is precisely why our founders created a republican form of government with a constitution prescribing limited federal powers. But as economist Dr. Walter Williams has oft lamented, we increasingly operate more and more like a democracy. As he put it, “Today’s Americans think Congress has the constitutional authority to do anything upon which they can get a majority vote.”

And what they vote to do is buy votes through spending and rack up debt — and then finance that debt by printing money. In fact, one could characterize our Federal Reserve Bank, empowered to flood the economy with dollars backed by nothing but the “good faith and credit of the U.S. government,” as a legalized counterfeiting operation.

The latest round of this was the September 2012 deployment of “QE3,” which involved the printing of $85 billion a month until the Fed decided, in January of this year, to reduce the figure by $10 billion each month. While, in fairness, some of the government’s new money simply replaces existing bills in circulation, the fact remains that the overall money supply has increased from $800 billion in 2008 to approximately $2.9 trillion today — that’s more than 250 percent.

Since this new paper isn’t backed by gold, and hasn’t been accompanied by a corresponding increase in economic output (wealth creation), this fiat currency is essentially funny money that dilutes the value of the dollars in your pocket. Put simply: More dollars+same actual wealth=less wealth represented by each greenback. And the result? A century ago the dollar was worth 100 cents when valued against gold or silver.

This inflation of the money supply — the true meaning of “inflation” — is what leads to rising prices, which, as Nobel Prize-winning economist Milton Friedman said, are “always and everywhere a monetary phenomenon” in the sense that they “cannot occur without a more rapid increase in the quantity of money than in output.”

Some might point out here that what the government calls the “inflation rate” (actually a measurement of the change in prices) has been low in recent times. Note, however, that the Bill Clinton administration stopped including the cost of food and fuel in this calculation in the 1990s, which serves to hide the true impact of rising prices. And while gas prices have dropped in recent times, owing to increased U.S. oil production and a Saudi price cut, many Americans have of late experienced supermarket sticker shock.

And what has driven all this new money-printing? As Andrew Huszar wrote last year in the Wall Street Journal piece “Confessions of a Quantitative Easer”:

I’m sorry, America. As a former Federal Reserve official, I was responsible for executing the centerpiece program of the Fed’s first plunge into the bond-buying experiment known as quantitative easing. The central bank continues to spin QE as a tool for helping Main Street. But I’ve come to recognize the program for what it really is: the greatest backdoor Wall Street bailout of all time.

As to any alleged benefits, even former Fed chairman and loose-money advocate Alan Greenspan has admitted that the money-printing “did not work.”

But it very well may work to help collapse our economy — if history is any guide. Consider Weimar Republic Germany. Burdened by reparations extracted after the nation’s defeat in WWI, the government started printing marks to finance its debt. The result was the 30,000-percent rising-prices rate, economic turmoil, and social unrest that paved the way for Adolf Hitler’s rise to power.

And there are even more egregious examples of central-bank meddling. As Dr. Williams wrote in 2008 (using “Inflation” as synonymous with “rising prices”):

Of course, some will say that the United States isn’t Hungary or Zimbabwe. But we should seriously wonder what we will be tomorrow if we won’t stop digging an economic grave with credit cards, counterfeit cash, and covetousness cloaked in compassion.

1 thought on “Prediction: Economic Collapse, Civil Unrest in America by 2016”