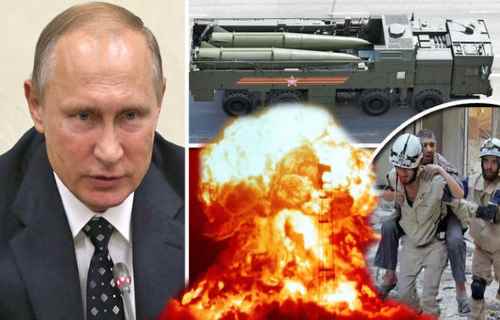 With tensions among the world’s super powers mounting in places like Ukraine, Syria, North Korea and  most recently Qatar and Iran, it may only be a matter of time before someone pushes the red button.

When they do, all bets are off, and as we’ve learned from the assassination of Archduke Ferdinand in June of 1914, once the trigger is pulled there’s no going back and hundreds of millions of lives, perhaps billions, will hang in the balance.

Considering that Russia is closely allied with Syrian President Assad, has a direct interest in maintaining control of Ukraine’s former Crimea region, and its ties to Iran, ignoring the possibility of a global war in coming years could be a devastating oversight.

We are, in fact, at war right now. But just as was the case from the 1960’s through the end of the 1980’s, it is a “cold war.” There have been no direct troop engagements that we know of between the Russians and the United States. But look to cyber space and it should be clear that there is a battle taking place on a daily basis. Moreover, as we’ve previously reported, nuclear war may well be on the horizon, because the confrontations taking place on the geo-political stage are no longer just talk.

Action has already been taken by both sides:

Putin and the Russian people believe the U.S.’s actions are going to lead to a nuclear conflict initiated by the United States.  The leadership of the U.S. is made up of politicians who began their careers as Marxist-Socialists.  Traitors now have their fingers on the triggers of the nuclear warheads, aided by “yes-men” of the general staffs who will not remember their oaths to the Constitution of the United States and the American people.  They will ignore that these charges take precedence above any orders given by a petty, dope-smoking, Marxist community organizer of dubious citizenship who was “emplaced” into office to destroy the country.

Instead of statesmen and diplomats, we now have self-interested, politically-motivated belligerents backing Russia and other nations into corners and pushing them toward war.  How long the war of words will be continued is unknown; however, when the missiles begin to fly you can be certain of something.  You can rest assured that the men who spoke those words will be in bunkers and other safe places and out of harm’s way…paid for by the American taxpayer.

Indeed, those who push the buttons will likely be in bunkers well before the missiles hit their targets. That’ll likely be the case on both sides.

For the rest of us?

Vladimir Putin has made clear how it will play out:

The Putin Interviews between the Russian leader and the Oscar-winning director, which will be screened on Showtime, were shot between summer 2015 and February this year and give an extraordinary insight into one of the most powerful men in the world.

Stone asked Putin whether the US would be ‘dominant’ in the event of a ‘hot war’ between the two nuclear powers.

‘I don’t think anyone would survive such a conflict,’ Putin said.

Earlier this year the hacking collective Anonymous issued a frightening warning about World War III, highlighting the fact that while we are all busy enjoying the good times, elite Deep State insiders are planning for what comes next:

All the signs of a looming war on the Korean Peninsula are surfacing… we’re watching as each country moves strategic pieces into place… but unlike past world wars… although there will be ground troops the battle is likely to be fierce, brutal and quick.

It will also be globally devastating on the environmental and economic levels.

This is a real war with real global consequences… With three super powers drawn into the mix… Other nations will be coerced into choosing sides.

The citizen will be the last to know…

And because the citizen will be the last to know, now may be a good time to review your nuclear war preparedness strategies and stock up on survival essentials that should include FDA approved anti-radiation pills and NBC rated tactical gas masks.

The elite will have plenty to go around in their bunkers, but you can be 100% assured that none of the supplies they’ve been stockpiling for the last decade will ever make their way to the general population.