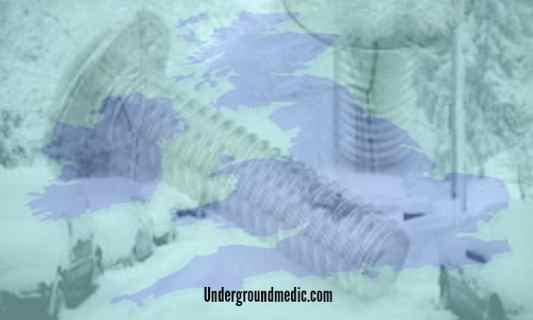 I’ve done a good deal of thinking over the last few days, the ‘what if?’ type of thinking. In just over a week, He Who thinks He Should Be Obeyed leaves for Kenya, and then it will just be me and Shortie, who is now so tall I will be Shortie by next year.

We have two major things left to do to the house, both involving major upheaval. It was meant to be one job, build an extension for a kitchen behind the garage, incorporate a utility and a downstairs bathroom and rebuild the garage and front porch. Sadly, although the builder tells me it would be technically easier to do it all in one go, he is not prepared to pay for the chunk we can’t afford, so two builds it is, one this year and one next year.

So, whilst planning my kitchen, utility room and bathroom, and staring dreamily into space planning what will go where it occurred to me that although my mind says I am prepared, the facts are somewhat different.

Yes, compared to the vast majority of the population I am prepared, but in relation to where I need to be, I am not. This is not entirely my fault. This site is predominantly read by Americans. What I have learned about prepping I have learned mostly from Americans, but the problem is, the UK is not set up to allow me to prep the American way.

As an example, pressure canning. Ever tried to buy one in the UK? Go on, give it a go. God Bless Amazon eh? If you can actually find a company to ships to the UK that is. So as the hours turn into days, and days into weeks you are just starting to give up hope when an email to the 74th pressure canner company yields a result. Back to Amazon, a couple of clicks and you’re almost home. Then you get to checkout and find that the postage is the same as an air ticket to Brazil. I knew they were heavy, but I could fly my ten-year-old to Rio for that price.

So, back to the iPad to email a couple of chefs I know and a few celebrity chefs that I don’t. Their verdict is unanimous, you cannot can in a pressure cooker…well you can but you have no idea if the pressure is constant and the food is bacteria free. Now I don’t believe for a minute that everyone who pressure cans stands there staring at the gauge for the entire processing time, but now the professionals have said no to a pressure cooker I feel duty bound not to do it.

So, high acid foods I can water bath can, low acid foods I have to live without or buy pre-prepared. Like who actually eats canned meat and fish? In a crisis however it’s better than nothing…I think.

Okay. The bulk grains thing that American preppers have going on, is it me or do British farmers have a problem with selling grains to an individual? I asked three or four, only to be met with blank stares on three occasions and raised eyebrows from the fourth. I can’t see the problem, they will sell me eggs, they sell nets of cabbages and onions, and even sacks of potatoes but wheat, barley and corn…no chance.

So, next stop, large warehouses that do big everything. Some charge you to join, others are ‘trade’ only…I went trade, to avoid the joining fee. Don’t ask, let’s just say they don’t check too closely.

Not having a nice dry garage to store my stash in is a bit of a blow, there really isn’t the space to store large quantities of bulky items anywhere else in the house. The roof is full of stuff that hasn’t been unpacked yet, but it will be a useable space by the summer when all the boxes are unpacked and stowed away in their rightful homes. It still won’t be any use for most foodstuffs because of the constant temperature fluctuations, but toilet rolls, washing powder etc will be fine up there.

My ‘what if?’ thinking lead me to a startling conclusion. Generally, if the SHTF tomorrow the UK is pretty much stuffed. We have more than 65,000,000 people sitting on a rock surrounded by the ocean. Most of those people haven’t given a second thought to what happens next week let alone in a few months or a few years time. More and more people are resorting to shopping daily for their meals, which distances them even more from the thought of having some supplies ‘put by’. money is incredibly tight in most families. Those in work pay so much for childcare there is little cash, if any, left over. When you are struggling to put food on the table buying extras is out of the question.For those of us who are awake the membership costs of warehouse clubs or the lack of even a tenuous link to a trader entitled to use the warehouse, leaves them with no choice other than to buy at full retail prices, and in small sizes from supermarkets. Yes, it’s better than nothing but it’s not ideal.

More and more people are resorting to shopping daily for their meals, which distances them even more from the thought of having some supplies ‘put by’. money is incredibly tight in most families. Those in work pay so much for childcare there is little cash, if any, left over. When you are struggling to put food on the table buying extras is out of the question even if they wanted to.For those of us who are awake the membership costs of warehouse clubs or the lack of even a tenuous link to a trader entitled to use the warehouse, leaves them with no choice other than to buy at full retail prices, and in small sizes from supermarkets. Yes, it’s better than nothing but it’s not ideal.

The UK is a mess. The government jubilation about lower inflation is purely due to the drop in oil being passed on to motorists. There has been no drop in food prices beyond the battling of the major players. Tesco, Sainsburys, Asda-Walmart, Waitrose, and Morrisons are trying to complete with the likes of Aldi and Lidl who offer cheaper prices but brands that the British are not familiar with. The Germans (Aldi and Lidl) are winning at this point, but again the packs are small and the choice of goods is far less than we are used to.

For those of us who are awake the membership costs of warehouse clubs or the lack of even a tenuous link to a trader entitled to use the warehouse, leaves them with no choice other than to buy at full retail prices, and in small sizes from supermarkets. Yes, it’s better than nothing but it’s not ideal.

Homelessness in on the increase and although the jobless figures have supposedly improved those who do work are often worse off than those who live on handouts. That is so wrong on every level.

We have people who are British born tripping over themselves in the rush to blow us up, shoot us or chop off our heads on a public road in the middle of the day and the ex-head of MI6 says that’s to be expected if we criticise their culture or religion. This is totally unacceptable. Freedom of speech is just that, a freedom that British citizens of all creeds, colours and religions should be allowed to enjoy. This is not negotiable. I am a Christian,  if someone wishes to criticise that then that’s their right. I won’t like it, I may not stick around to listen to it, but I accept it as their right. We are developing a culture of selective racism. It’s okay for people to speak out against me, but I am not allowed to speak out against them.

We have an education system that seems to change every fifth Friday. You get a letter home explaining the changes…which you rarely understand. You just start to get your head around it and accept that it is no longer acceptable to write numbers in simple columns and add them up, you have to do it by the most circuitous route possible, and then along comes the fifth Friday and you get another letter telling you that it’s changed again. No wonder we are churning out uneducated young adults with no clue if they have the right change let alone what they plan to do with the rest of their lives.

Many people in the UK won’t last a month if there were to be a major nationwide disaster. The National health Service is collapsing at an ever increasing rate which won’t help if millions need assistance at the same time, though even if the NHS were flourishing and functioning for many that wouldn’t be enough.

The ‘fend for yourself ‘ ideal that made this country great left at about the same time as the manufacturing industries we were once famous for. We have become a nation of financiers and bankers, we produce little these days except very rich ex-public schoolboys, and occasionally girls who make millions plus bonuses managing other people’s money. We all know how that’s going to end don’t we.

The get-up and go of the British people has got up and gone., who knows if it will ever return?