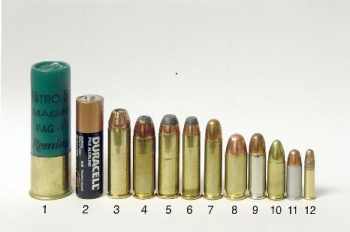 Before you purchase personal-protection ammunition, contemplate the following items. Only then can you make an informed decision about what load best suits your unique set of demands.

Price: Honestly answer this question: What value do you place on your life, or those of your family members? I would wager that it’s more than the $1 to $1.50 cost of a defense-specific round that could potentially preserve your—or your family’s—wellbeing. As such, ignore the price tag; instead, focus on the loads’ performance parameters and whether or not they meet your demands.

Expectations: Where do you live? From where do you anticipate a threat to emerge? What measures are you willing to take to stop a threat? The answers to these questions will narrow the field of suitable options considerably.

Do you want your ammunition to be able to defeat “light” barriers, such as clothing, or be “barrier blind,” and clean house through the much-vaunted “FBI protocol?” Bullets well suited for the former generally perform poorly against “hard” barriers; however, their advantages include: reduced risk of over-penetration, increased energy dispersion and, in the case of a miss, rapid deceleration upon striking an object. Loads fitting this description are Federal’s Guard Dog,Hornady’s Critical Defense, and Liberty Ammunition’s Civil Defense. Typically, these loads feature light-for-caliber bullets and, if a lead core is utilized, it is not bonded to the jacket.

Projectiles that are designed specifically to meet the stringent FBI protocol penetrate deep and readily defeat various types of barriers; however, they can result in over-penetration and are more difficult to stop with an outright miss. They do, however, offer consistency with regard to depth of penetration, expansion, and weight retention. Such loads include: Hornady Critical Duty, Federal HST and Hydra-Shok, Speer Gold Dot, Winchester Bonded PDX1 and Defend, BarnesTAC-XPD, Nosler Defense, Cor-Bon DPX, and Remington Ultimate Defense and Golden Saber, among others.

Construction runs the gamut in this category; some feature all-copper projectiles whereas others have gilding metal jackets bonded to lead cores. Still, some have hard, lead-alloy cores with a gilding metal jacket secured via simple, yet ingenuous, “mechanical” lock. Between these two categories is found a myriad of loads that offer some combination of the aforementioned performance parameters. These include: Hornady Custom, HPR, and Fiocchi loaded with the Hornady XTP, PMC Starfire, and Federal Personal Defense (JHPs). Lastly, unless employing them for a specific reason, avoid the use of standard, non-expanding FMJ loads for personal protection, as many of the disadvantages of FBI-“protocol”-type bullets previously described are exacerbated, and there is minimal energy dispersion and reduced tissue disruption.

Reliability: Reliability is paramount in a defensive load; the ammunition must feed, fire, extract, and eject every time in your handgun. Of course, this cannot be determined at the time of purchase, but chances are, by reading and comparing reviews of the ammunition from various magazines, websites, and forums, as well as the talking with knowledgeable range and gun store staff, you will garner enough feedback about suitable (and unsuitable) handgun/ammunition combinations to make an informed buying decision. Also, double-check the owner’s manual to see if there are preferred (or required) ammunition types and bullet weights and profiles. Adhere to these suggestions for both safety and optimal performance. Lastly, spend time at the range confirming the compatibility of your chosen ammunition with handgun. Do not rely on an unproven combo.

Velocity: Trajectory and energy aren’t the primary concerns surrounding velocity; rather, that, in your gun, the bullet attains sufficient speed to reliably upset is the foremost consideration. Bullets are designed to work within a specific window of velocities, and deviating from that range can cause the projectile to fail to expand (i.e. acting as a FMJ), over-expand, thereby reducing penetration, and even experience jacket-core separation or unintended fragmentation. The former is most evident in compact “pocket” pistols, which, due to their abbreviated barrel lengths, lack sufficient velocity to ensure expansion—especially if the hollow-point cavity is clogged. Many major ammunition manufacturers now have options that are designed to mitigate this concern. Some examples are: Hornady Critical Defense, Remington Ultimate Defense Compact Handgun, and Speer Gold Dot Short Barrel. For full-size handguns, relaible expansion shouldn’t be an issue. And, unless you’re using a handgun with an abnormally long barrel (or pistol caliber-chambered carbine), exceeding the upper velocity limitations of a self-defense bullet would be unlikely.

Accuracy: This is purely subjective. Does your ammunition/handgun combination need to be able to shoot 1” groups at 25 yds. to stop a threat? Perhaps, I suppose. Or is 5” to 6” adequate? Maybe somewhere between is okay. What about at 7 yds. with a “pocket” pistol? Is 2” sufficient? The reality is, in the pursuit of achieving phenomenal accuracy, you might eliminate a load that otherwise ideally meets your performance parameters. Choose wisely.

Cases: Nickel-plated or brass cases? Is there a difference? Most “premium” defensive-specific loads now feature nickel-plated cases. The reported benefits are: enhanced corrosion resistance, easier viewing (magazine and press checks) in low-light conditions, and improved feeding. If you rotate defense loads at least annually, even if you carry daily in high-moisture environments (i.e. primarily the eastern half of the U.S., Midwest, and Northwest coast) or concealed (legally) in high-perspiration areas of your body, nickel-plated cases are likely unnecessary; however, improved visibility in compromised lighting is a real benefit. As for functioning, I’ve seen no discernible difference in the feeding reliability between nickel-plated and standard brass cases. But, since nickel-plated cases are pretty much standard on defense-specific loads, consider it a bonus.

By no means is this list all-inclusive; for example, one could also consider recoil (full power vs. reduced-recoil). But, hopefully this gives you some food for thought. It’s a potentially life-saving decision that shouldn’t be made haphazardly.

5 Recipes You Should Know by Heart

Off-Grid Mechanics: 8 Steps That You Need To Know

How to Make Your Own Bouillon Cubes at Home