Connecticut’s gun control deadline requiring gun registration has come and gone — putting tens of thousands of law-abiding citizens at risk of felony charges, should officials decide to crack down on what one gun owner called a stand of “civil disobedience.”

Last January after the Sandy Hook shooting, Connecticut passed a stringent new gun control laws, and in April, Gov. Dannel Mallory approved restrictions which redefined the definition of an “assault weapon” to ban 100 more types of semi-automatic weapons. The law’s grandfather clause allowed gun owners already possessing AR-15s and similar weapons to keep them, but they must submit their personal information to a statewide registry. A photo taken by George Roelofson depicting long lines of gun owners waiting to register their weapons and ammunition went viral in December as the law’s deadline approached: 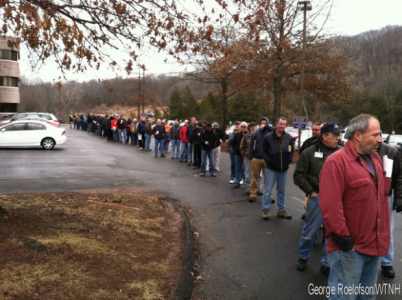 But that’s only a tiny fraction of the state’s gun owners.

Now, as Connecticut’s The Courant estimates, as many as 100,000 gun owners with 350,000 unregistered weapons have yet to come forward, making state officials uneasy. Furthermore, estimates concerning banned magazines holding more than ten rounds — which have no serial numbers and are impossible to track unless registered — show that only 36,932 have been entered into the state’s databases, while over two million remain on the market.

“I honestly thought from my own standpoint that the vast majority would register. If you pass laws that people have no respect for and they don’t follow them, then you have a real problem,” Republican state Sen. Tony Guglielmo, ranking senator on the legislature’s public safety committee, told The Courant.

Last week, a gun owner informed Guglielmo during a constituents’ meeting that he and fellow gun owners refused to submit to the law’s registration requirements.

“He made the analogy to prohibition. I said, ‘You’re talking about civil disobedience, and he said ‘Yes,’ “ Guglielmo said.

Mike Lawlor, undersecretary of Connecticut’s Office of Policy and Management, said that the state will not yet aggressively pursue unregistered gun owners — even sending out a reminder letter could spark tensions between gun owners and officials. Lawlor instead suggested first extending the deadline and holding an “outreach campaign” to encourage submissions.

Lawlor added that the law, having technically rendered otherwise law-abiding citizens with no criminal history felons in one fell swoop, has partly succeeded in its goal to eliminate assault weapon ownership in the state.

“Like anything else, people who violate the law face consequences,” he told The Courant, leaving open the possibility of future prosecutions. “That’s their decision. The consequences are pretty clear… There’s nothing unique about this. The goal is to have fewer of these types of weapons in circulation.”

Meanwhile, Scott Wilson, president of Connecticut Citizens Defense League, Inc. (CCDL) has led the charge against Connecticut’s gun restrictions, suing the state in May for passing an unconstitutional law that violates the Second Amendment.

“I think that the state would be better served using its resources going after violent criminals — ones that are perpetuating acts of violence in their community — instead of going after law-abiding citizens,” Wilson told The Daily Caller.

Many Connecticut gun owners either remain unaware that the law requires registration, or don’t believe that their particular models fall under the law’s jurisdiction at all, Wilson added. He also noted that he had been contacted by many gun owners after the registration deadline passed who were afraid to come forward and get slapped with criminal charges.

“My sincerest hope is that the state of Connecticut will come to [its] senses and the law that was passed Jan. 1 will one day be repealed by the state legislature,” Wilson said.

A U.S. district court judge ruled in favor of the state last week, but CCDL filed a notice to appeal the decision the day after.

Connecticut state police declined to comment, while the state’s firearm licensing department could not be reached.