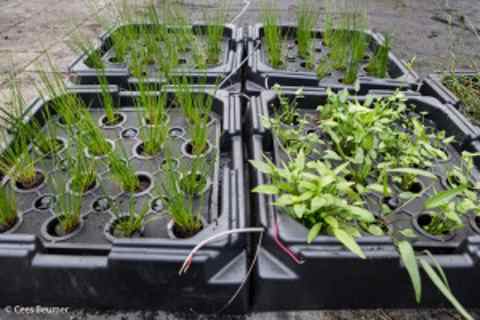 Plants have once again made it to the green news, and surprisingly, the main reason this time is not their ability to absorb carbon dioxide. Dutch start-up Plant-e is currently harvesting the energy from plants and using it to power street lights, Wi-Fi spots and charge cell phones.

Protecting world’s vegetation cover is unquestionably one of the most important actions we can take to slow down climate change. But while plants are considered precious mainly because of their ability to take up CO2, other properties that they have might make them just as important.
A few months ago, in the late 2014, a start-up called Plant-e showed off their greatest invention for a first time in a pilot site near Amsterdam (see demo video here).

The set-up comprises of small plastic containers, also referred to as modules, used for growing of plants. As the greens grow, they start photosynthesizing, a process which essentially turns solar power into sugars. Any excess sugars are released through the roots into the soil, where they get broken down into electrons and protons.

The guys at Plant-e realized that these byproducts of photosynthesis can actually be harnessed and used to conduct electricity without needing to damage the plant at all. Naturally one would presume that the electricity will be far from sufficient in quantity to power anything, but in fact, it is more than enough.

Currently, Plant-e is using the prototype technology to power more than 300 LED streetlights in the municipalities of Ede and Wageningen, and this is still far from what the guys behind the technology aim for. Although their crowd-funding campaign on Kickstarter did not hit the goal, and therefore did not manage to provide them with a much-needed financial boost, the guys still went ahead and are developing the first real-size plant power modular system. The ultimate goal is to be able to generate 28kWh of power per year from one square meter.

Alongside, a tabular large-scale system is also under development. The fully functional pilot system of this scale is expected to be completed in the coming five years, when the technology might well become a major competitor in the world of renewable energy generation.

Mila is a researcher and scientist with a great passion for soils, rocks, plants, water and all environment-related aspects of our surroundings. For the past 10 years, during the course of her educational and professional development, she travelled all over Europe, Africa and Asia, driven by her passion for the environment and urge to seek challenges.

Goodbye Power Company: Why You May Soon Be Generating Your Own Electricity – Wind-Powered Device Can Produce 11 Gallons Per Day of Clean Drinking Water From The Air

Food, Gardens & Fuel; What’s yours, is ours!