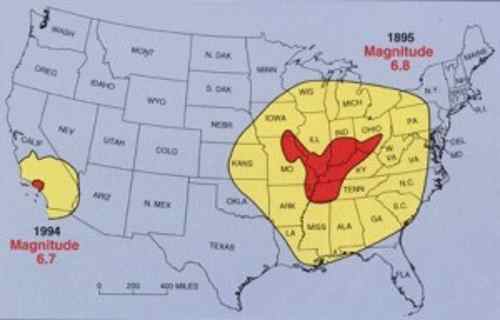 Once upon a time, North America almost divided along a very deep subsurface rift.  Today, that rift system and the faults associated with it are known as the New Madrid fault zone.  This fault zone is six times larger than the San Andreas fault zone in California and it covers portions of Illinois, Indiana, Missouri, Arkansas, Kentucky, Tennessee and Mississippi.  Back in 1811 and 1812, four of the largest earthquakes in U.S. history struck that area of the country.  The movement of the ground was so powerful that it changed the course of the Mississippi River and it rang church bells in Boston, Massachusetts.  So could such an earthquake (or worse) strike today?  Well, last year the U.S. Geological Survey released a report that warned that the New Madrid fault zone has the “potential for larger and more powerful quakes than previously thought“, and the USGS also admits that the number of significant earthquakes in the middle part of the country has more than quintupled in recent years.  We also know that the U.S. government and large corporations are so concerned about the potential for a major New Madrid earthquake that they have held major exercises that simulate one.  Scientists tell us that it is just a matter of time until another superquake hits the region, and personally I am one of the millions of Americans that believe that we will eventually see a New Madrid earthquake that will divide the United States in half.  That is one of the reasons why I included a New Madrid earthquake in my novel.  But others are skeptical.  They point out that we have not seen a truly devastating earthquake in that region for more than 200 years.  So why be concerned about one now?

What everyone can agree on is that there is an area of significant geological weakness under the New Madrid fault zone.  This area of weakness formed when the continents were breaking up.  The rift that formed did not end up splitting the North American continent at that time, but the area of weakness remains.  The following comes from Wikipedia…

The faults responsible for the New Madrid Seismic Zone are embedded in a subsurface geological feature known as the Reelfoot Rift that formed during the breakup of thesupercontinent Rodinia in the Neoproterozoic Era(about 750 million years ago). The resulting rift systemfailed to split the continent, but has remained as anaulacogen (a scar or zone of weakness) deep underground, and its ancient faults appear to have made the Earth’s crust in the New Madrid area mechanically weaker than much of the rest of North America.

This relative weakness is important, because it would allow the relatively small east-west compressive forces associated with the continuing continental drift of the North American plate to reactivate old faults around New Madrid, making the area unusually prone to earthquakes in spite of it being far from the nearest tectonic plate boundary.

And indeed, there have been some awesome earthquakes in this region throughout history.

Back in 1811 and 1812, there were four earthquakes along the New Madrid fault zone there were so immensely powerful that they are still talked about today.

Those earthquakes opened deep fissures in the ground, caused the Mississippi River to run backwards, and were reportedly felt more than 1,000 miles away.  It is said that the stench of fire and brimstone hung in the air for months afterwards.

The most powerful of this series of quakes was on December 16th, 1811.  The following is one description of what happened on that day…

This powerful earthquake was felt widely over the entire eastern United States. People were awakened by the shaking in New York City, Washington, D.C., and Charleston, S.C. Perceptible ground shaking was in the range of one to three minutes depending upon the observer’s location. The ground motions were described as “most alarming and frightening” in places like Nashville, Tenn., and Louisville, Ky. Reports also describe houses and other structures being severely shaken, with many chimneys knocked down. In the epicentral area the ground surface was described as being in great convulsion, with sand and water ejected tens of feet into the air — a process called liquefaction.

But there have also been others times throughout history when we have seen a major earthquake along the New Madrid fault.

For example, according to scientists there is evidence of other superquakes  in the distant past…

Geological evidence indicates that two such super-earthquakes happened twice in the past 1,200 years: the first some time between 800 and 1000 A.D., and the second between 1300 and 1600 A.D.

And now earthquake activity in the central portion of the nation is increasing again.

As I noted above, the USGS says that the frequency of earthquakes in the central and eastern portions of the United States has more than quintupled in recent years.  And the USGS has now gone so far as to point out the relationship between human activity and the increase in earthquakes.  The following comes from an article done by the U.S. Geological Survey…

The number of earthquakes has increased dramaticallyover the past few years within the central and eastern United States. Nearly 450 earthquakes magnitude 3.0 and larger occurred in the four years from 2010-2013, over 100 per year on average, compared with an average rate of 20 earthquakes per year observed from 1970-2000.

This increase in earthquakes prompts two important questions: Are they natural, or man-made? And what should be done in the future as we address the causes and consequences of these events to reduce associated risks? USGS scientists have been analyzing the changes in the rate of earthquakes as well as the likely causes, and they have some answers.

USGS scientists have found that at some locations the increase in seismicity coincides with the injection of waste water in deep disposal wells. Much of this waste water is a byproduct of oil and gas production and is routinely disposed of by injection into wells specifically designed for this purpose.

So what would happen if a major earthquake did strike the New Madrid fault zone?

This is something that scientists have studied.  If a magnitude 7.7 earthquake hit the region today, thousands would die, hundreds of thousands of buildings would be damaged, and the economic losses would be measured in the hundreds of billions of dollars.  The following comes from Wikipedia…

In October 2009, a team composed of University of Illinoisand Virginia Tech researchers headed by Amr S. Elnashai, funded by the Federal Emergency Management Agency(FEMA), considered a scenario where all three segments of the New Madrid fault ruptured simultaneously with a total earthquake magnitude of 7.7. The report found that there would be significant damage in the eight states studied –Alabama, Arkansas, Illinois, Indiana, Kentucky,Mississippi, Missouri and Tennessee – with the probability of additional damage in states farther from the NMSZ. Tennessee, Arkansas, and Missouri would be most severely impacted, and the cities of Memphis, Tennessee and St. Louis, Missouri would be severely damaged. The report estimated 86,000 casualties, including 3,500 fatalities; 715,000 damaged buildings; and 7.2 million people displaced, with 2 million of those seeking shelter, primarily due to the lack of utility services. Direct economic losses, according to the report, would be at least $300 billion.

But remember, that study only considered a magnitude 7.7 earthquake.

It is also important to note that there are 15 nuclear reactors along the New Madrid fault zone.  In the event of a major New Madrid earthquake, we could be looking at Fukushima times 15.

Of course most Americans are completely oblivious to all of this.  In fact, most Americans don’t even know what the New Madrid fault zone is or where it is located.

But there are people in the government that are very aware of this threat.  In fact, the federal government considered it important enough to hold a major five day simulation known as “National Level Exercise 11″ just a few years ago…

In May, the federal government simulated an earthquake so massive, it killed 100,000 Midwesterners instantly, and forced more than 7 million people out of their homes. At the time, National Level Exercise 11 went largely unnoticed; the scenario seemed too far-fetched — states like Illinois and Missouri are in the middle of a tectonic plate, not at the edge of one. A major quake happens there once every several generations.

National Level Exercise 11, or NLE 11, was, in essence, a replay of a disaster that happened 200 years earlier. On Dec. 16, 1811, a magnitude 7.7 earthquake hit the New Madrid fault line, which lies on the border region of Illinois, Indiana, Missouri, Arkansas, Kentucky, Tennessee and Mississippi. It’s by far the largest earthquake ever to strike the United States east of the Rockies. Up to 129,000 square kilometers [50,000 square miles] were hit with “raised or sunken lands, fissures, sinks, sand blows, and large landslides,” according to the U.S. Geological Service. “Huge waves on the Mississippi River overwhelmed many boats and washed others high onto the shore. High banks caved and collapsed into the river; sand bars and points of islands gave way; whole islands disappeared.” People as far away as New York City were awakened by the shaking.

More quakes, of a similar size, followed. But the loss of life was minimal: Not too many people lived in the area at the time. Today, there are more than 15 million people living in the quake zone. If a similar quake hit, “7.2 million people could be displaced, with 2 million seeking temporary shelter” in the first three days, FEMA Associate Adminsitrator William Carwile told a Congressional panel in 2010. “Direct economic losses for the eight states could total nearly $300 billion, while indirect losses at least twice that amount.”

And major corporations are also concerned about what could happen.

For example, in a previous article I noted that Wal-Mart had “participated in an exercise” that simulated a major earthquake in the New Madrid fault zone…

Buried in a Wall Street Journal article from about a week ago was a startling piece of information.  According to a Wal-Mart executive, Wal-Mart “participated in an exercise to prepare for an earthquake on the New Madrid fault line” earlier this summer.

Nobody knows when it is going to happen.

But this is a real threat.

And if we do see a magnitude 9.0 earthquake or greater, we could be talking about a continent changing event.

So what do you think about the possibility of a major earthquake in the New Madrid fault zone?