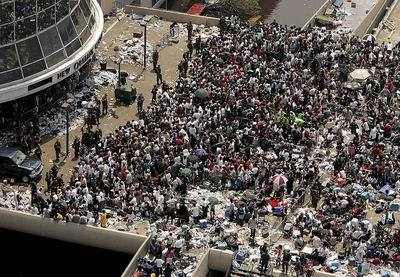 There has been a lot of derogatory talk lately about “preppers” and “survivalists.” Here are 10 reasons why preppers and survivalists have always been vital to the United States and why it is essential that we have as many as possible to survive future disasters.

To start with, the titles “survivalist” and “prepper” would have seemed redundant a couple of generations ago. When the Greatest Generation was growing up, preparedness was simply a way of life. Before the Federal Emergency Management Agency, Social Security, Medicare, Medicaid and other Federal aid programs were around, people knew that they had to be able to take care of themselves in the event of natural and manmade disasters.

At the core, that’s what survivalists and preppers are. They are people who are aware that life is full of uncertainty and who have decided to put things into place for when bad times happen.

With that, here is the top 10 list of why America depends on survivalists and preppers:

1. FEMA: The cost for local, state and Federal agencies to plan, equip and staff for everydisaster that might happen is cost-prohibitive. When disasters strike, government is quick to talk and quick to “ramp up,” but government help is slow to come and inefficient when it arrives. The irony is how often highly qualified and motivated front-line first responders are prevented from doing as much as they could by top-heavy bureaucracies.

Survivalists and preppers, on the other hand, are able to act quickly and efficiently to take care of their own houses and provide stability, structure and assistance for their streets, neighborhoods and beyond. Because they know the terrain and the players in the areas where they live and operate, they can quickly establish stable micro-environments for recovery to grow from.

2. Stable base: An organization (or nation) of people with narrowly focused, specialized skills may accomplish great things when everything is going smoothly, but it quickly falls apart when trouble comes and key people are knocked out.

The survivalist and prepper mind-set of jack-of-all-trades makes for a stable organization (or nation). If the specialist falls or needs help, others can help pick up the slack — even if it means they’re doing it at a slower speed or lower level of proficiency.

3. Joseph in the Bible: Preppers and survivalists have been around saving the day since the beginning of time. In Genesis 37-50, Joseph sees trouble coming and prepares for seven years. At the end of seven years, a severe drought and famine hit that last for the next seven years. Because of Joseph’s preparations, Egypt survived the drought and famine and was able to help the surrounding nations.

4. Founding Fathers: With the Constitution and Bill of Rights, our Founding Fathers pushed responsibility from the Federal government down to the individual citizen and promoted a survivalist/prepper mentality. They did it with the 2nd and 4th Amendments, they did it by example (Washington leading a mostly barefoot army across the Delaware), and they did it throughout their writing.

Which do you think is more stable in the event of a siege that is due to disasters or war?

If you focus only on food and water supplies, a city, county, region or country with many preppers will be much more resilient to being cut off from outside help than one with few preppers.

6. Independent from the government: How much leverage does an energy tax (or most other taxes) have on a family that’s living partially or completely off the grid? The more self-reliant you are, the less control the government can exert over your life through taxes.

7. Criminals fear the aware and prepared: This is fairly straightforward. Preppers and survivalists gradually become more aware and prepared than the average person. This will show itself in your walk, in your eyes and how you carry yourself. In short, you stop looking like a wounded gazelle and more like a badger… cute and cuddly, but ready to do anything necessary to stop a threat to himself or his loved ones.

8. Tyrants fear survivalists and preppers: In addition to living a lifestyle that insulates them from siege, some taxes and being nannied, survivalists and preppers are usually well-armed and seek advanced training. Good men have nothing to fear from an armed populace, but tyrants who seek to control the lives of others will always try to disarm them first through confiscation, taxation or pressure through media and the education system.

It worked for Adolf Hitler, Mao Zedong and many more narcissistic, mass murders throughout the ages. It worked so far back, in fact, that Aristotle spoke extensively about how, in any society, those who control the arms control the state.

9. More preppers means fewer refugees and faster recovery from disasters: After a local, regional or national disaster, the number of refugees will be inversely proportional to the number of preppers and survivalists in the area. In other words, the more preppers you have in an area, the less strain the hospitals, volunteer organizations and government-run refugee centers will have.

10. More able to help their fellow man: After a disaster, you’re not going to see very many refugees donating their food, supplies or time. It’s not that they don’t want to, but rather it’s because they are in a fight for their lives and may be dehydrated, hungry and tired.

Preppers and survivalists who have food storage, water or water-treatment tools and who have prepared themselves psychologically for disasters will be able to help in several ways. First, they are less likely to become refugees or use the time and resources of first responders. Second, since they are prepared for disasters, they can help the people in their immediate area, which will lessen the load on first responders and reduce the number of refugees. Third, by helping themselves and their neighbors, preppers will increase the quality of care for people who do need first responder care or who need to relocate to a refugee center.

In short, the more survivalists and preppers we have, the more stable our families, cities and the country as a whole are.

Please let me know what you think about this by commenting below.

Dr. David Eifrig Jr. is the editor of two of Stansberry’s best advisory services. One of his advisories, Retirement Millionaire, is a monthly letter showing readers how to live a millionaire lifestyle on less than you’d imagine possible. He travels around the U.S. looking for bargains, deals and great investment ideas. Already his average reader has saved $2,793 since 2008 (documented in each Retirement Millionaire issue). He also writes Retirement Trader, a bi-monthly advisory that explains simple techniques to make large, but very safe, gains in the stock and bond markets. This is a pure finance play and the reason Porter Stansberry loves having “Doc” on the team. Doc holds an MBA from Kellogg and has worked in arbitrage and trading groups with major Wall Street investment banks (Goldman Sachs). In 1995, he retired from the “Street,” went to UNC-Chapel Hill for medical school and became an ophthalmologist. Now, in his latest “retirement,” he joined Stansberry & Associates full-time to share with readers his experiences and ideas.