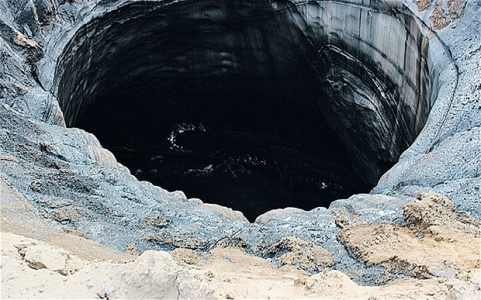 Researchers want to investigate two more mysterious holes found by reindeer herders in the Siberian wilderness
Researchers investigating a mysterious hole in the remote Siberian tundra might be busy over the next few weeks.
Two more formations, which are similar in appearance to the first, have been discovered in different parts of northern Russia.
One of new openings, which has a diameter of around 15 metres, has been found in the Yamal Peninsula, a permafrost region where the first hole appeared.
The second vast opening in the ground was discovered hundreds of kilometres away in the Taymyr Peninsula, to the east.
According to the Siberian Times, both of the holes were discovered by reindeer herders.

The Institute of the Earth Cryosphere has been studying the original giant opening, which is estimated to be 70 metres deep, since July 16.
Chief scientist, Marina Leibman, told URA.RU: “I have heard about the second funnel on Yamal, in Taz district, and saw the pictures.
“Undoubtedly, we need to study all such formations. It is necessary to be able to predict their occurrence.
“Each new funnel provides additional information for scientists.”
Scientists found an icy lake at the bottom of the hole and have taken soil and ice samples to find out when it was formed.
Experts believe it was likely to have been caused by the melting of underground ice in the permafrost, freeing gas that then built up high pressure and broke through to the surface.
A clip of the mysterious hole has been watched more than 7 million times online.
“It’s an interesting phenomenon,” said Vladimir Pushkarev, the head of the Russian Centre for Developing the Arctic.
“We are discussing further study of this place. It really is worth continuing scientific work.”