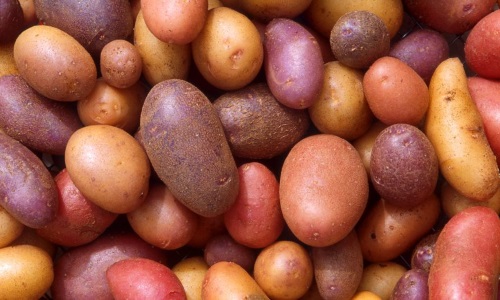 Over the last few years, potatoes have been losing importance as a food crop. The crop’s prospects in the starch and chemical industry, however, have been growing for quite some time. For starch potatoes, taste isn’t what’s important. Instead, emphasis is placed on the quality and composition of the starch. An optimised starch potato could be making its way to fields in Europe soon. This new potato cultivar is genetically modified.

Producing stable food yields for a growing world population is a major challenge for agriculture. Soil erosion, water shortages, climate change and shrinking farmland pose serious threats to essential resources, while human needs continue to grow. But what is the concept behind sustainability and can GM crops (e.g. herbicide tolerant soybeans) help us move towards a sustainable form of agriculture?

Three types of potatoes genetically engineered to resist the pathogen that caused the Irish potato famine are safe for the environment and safe to eat, federal officials have announced.

The approval by the U.S. Environmental Protection Agency and the U.S. Food and Drug Administration late last week gives Idaho-based J.R. Simplot Company permission to plant the potatoes this spring and sell them in the fall.

The company said the potatoes contain only potato genes, and that the resistance to late blight, the disease that caused the Irish potato famine, comes from an Argentine variety of potato that naturally produced a defense.

The three varieties are the Russet Burbank, Ranger Russet and Atlantic. They’ve previously been approved by the U.S. Department of Agriculture.

All three varieties “have the same taste and texture and nutritional qualities” as conventional potatoes, said Simplot spokesman Doug Cole.

Late blight thrives in the type of wetter conditions that led to the Irish potato famine in the 1840s. Potatoes were a main staple, but entire crops rotted in the field. Historical records say about a million people died of starvation and disease, and the number of Irish who emigrated might have reached several million.

Potatoes in modern times are considered the fourth food staple crop in the world behind corn, rice and wheat. Late blight continues to be a major problem for potato growers, especially in wetter regions. Fungicides have been used for decades to prevent the blight.

Simplot says the genetically engineered potatoes reduce the use of fungicide by half.

The company said the potatoes will also have reduced bruising and black spots, enhanced storage capacity, and a reduced amount of a chemical created when potatoes are cooked at high temperatures that’s a potential carcinogen.

Conventional potatoes can turn a dark color when cooked after they were kept cold for too long, a problem Simplot said the three new varieties reduce. The company also said the enhanced cold storage will likely have significant ramifications for the potato chip industry by reducing trucking costs.

There is no evidence that genetically modified organisms, known as GMOs, are unsafe to eat, but for some people, altering the genetic code of foods presents an ethical issue. McDonald’s continues to decline to use Simplot’s genetically engineered potatoes for its French fries.

“There is a growing attempt on the part of biotechnology companies to distance themselves from the consumer rejection of GMOs by claiming that new types of genetic engineering … are not actually genetic engineering,” the group said in a statement.

The first generation of Innate potatoes has been sold in stores under the White Russet label. Cole said the company hasn’t decided how it will market the second generation.

The company is currently at work on a third generation that Cole said will have protections against additional strains of late blight, all coming from genes within the potato species.

RELATED : Grow Sweet Potatoes — Even in the North

RELATED : Straw Bale Gardening Mushrooms and Potatoes – You’ll Never Go Back To Growing In The Soil! Any Other Way Will Seem Silly Once You’ve Done It This Way.

Resistance to pests and diseases

Attempts to confer pest and disease resistance to potatoes using genetic engineering haven’t been quite as successful.

What Is GMO & How Do I Avoid It? ( Serious Health Risks Associated with GM Food Including infertility, Immune Problems)

Forgotten Lessons of Self-Sufficiency From the Pioneers

The Greenhouse Of The Future – No Extra Heating Needed

Building a Battery Bank for Your Off-Grid Energy Needs