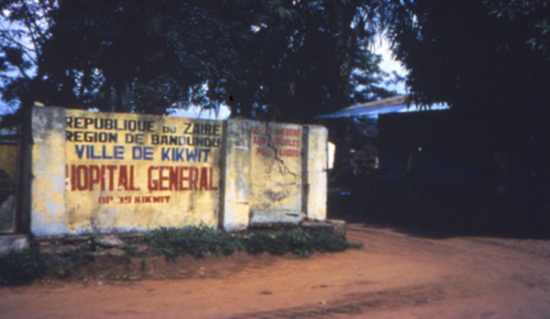 Kikwit General Hospital in Zaire (now the Democratic Republic of the Congo) during the 1995 Ebola outbreak, when 315 people got Ebola and 250 died.

Stopping the Spread of Ebola: 7 Facts to Know

If Ebola becomes a problem, here are some key facts you’ll need to know to reduce your chance of getting it.

1. It seems to start in animals and meat.
No one’s for sure, but it’s thought the disease starts in bats. They can have the virus without getting sick. Then they infect other animals, who do usually get sick.

People kill the other animals and contract the virus while either preparing the meat or eating it poorly cooked. Then the virus starts spreading from person to person.

2. After exposure, Ebola can kick in early or late.
After someone is infected, the symptoms start anywhere from two to 21 days later.

3. Ebola doesn’t spread like the flu.
This is the only good thing I know about this awful disease.

Flu: You can be contagious before you get sick.
Ebola: You’re not contagious until you have symptoms.

Flu: The virus can spread through fluid droplets in the air (like from a sneeze).
Ebola: Although it’s theoretically possible for Ebola to spread this way, it doesn’t seem to.

4. Ebola is highly contagious.
You can catch it by coming in direct contact with any bodily fluids, including blood, semen, urine, saliva, vomit, or feces.

5. The symptoms make prevention more difficult.
Symptoms make it hard for caregivers not to come into contact with those bodily fluids.

There’s profuse vomiting and diarrhea. And the victim’s blood can’t clot. So you can’t stop bleeding from the smallest scrape, prick, or bruise. Sometimes people spontaneously bleed out the nose, mouth, rectum, or urethra.

6. Ebola is still contagious after symptoms stop or the victim dies.
Ebola doesn’t stop being contagious with death or recovery. Victims’ dead bodies still carry the disease, and people who recover may continue to be contagious for up to two months or more.

Basically, cover yourself in impermeable products from head to toe. Think goggles, mask, disposable gown, gloves, and shoe covers. If you’re using needles, use them once only and dispose of them immediately.

Also disinfect your environment. Clean any exposed furniture, walls, or floors with a disinfectant, like a chlorine bleach solution, before future use.

This may not all be possible during a long-term disaster, but do the best you can. These kinds of precautions are not the standard in many economically developing areas of the world. Often, the sick—including the severely ill—are cared for in the home by friends and relatives. Even in clinics, protective clothing can be scarce and needles are sometimes reused. Also, the body is traditionally prepared for burial by friends and relatives, during which time they can be exposed to whatever infection killed the victim.

Next week I’ll write more about “universal precautions”—steps hospitals take to prevent the spread of illnesses—and how you can use their guidelines to protect yourself against most any contagious disease.

Ebola may look like the flu at first, with fever, cough, muscle aches, maybe a sore throat. And in normal circumstances, the flu is the more likely illness. We start to suspect Ebola if the person has been exposed to someone who has had the disease.

Later symptoms may include:

Ebola usually causes severe dehydration, so trying to get fluids in the body—orally, by IV, or even rectally—is about the only hope you have for saving someone who has this virus. Remember, though, that letting the person gulp fluids may cause them to vomit more, which just dehydrates them quicker. Click here for information about treating diarrhea and vomiting.

Some people’s immune systems, for some reason, may start making antibodies against the virus, which gives them a chance for survival. Most people, however, can’t make antibodies—again, reason unknown—and they are sure to die an average of 10 days after the symptoms began.

Depending on the virus strain (type) the mortality rate for someone with symptoms can range from about 25 percent to 90 percent.

As for those who survive? It takes two weeks to two months to recuperate, and many have long-term hearing and visual complications. They can be contagious for up to two months or more after recovery.

What about you? Have you heard of Ebola? Did you know what it was? How it’s spread? Do you have any information on it you’d like to add?

Americans are Preparing at Unprecedented Levels

1 thought on “Unprecedented Ebola Outbreak. Could It Spread Here?”