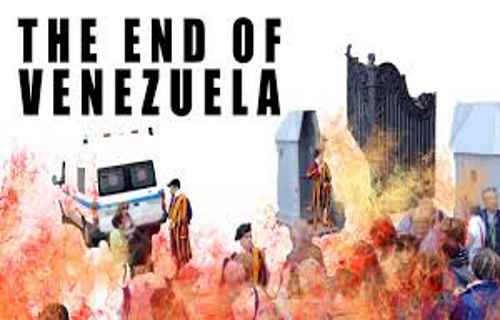 Public hospitals in Venezuela are facing a major health crisis due to a severe lack of medications, equipment, electricity and food.

Seven newborn babies recently died in a hospital in Barcelona, Venezuela, according to The New York Times. A blackout hit the city, and respirators in the hospital’s maternity ward shut down, claiming three young lives. Doctors kept the other babies alive by manually pumping air into their tiny lungs for hours, but four more died that night.

Under the late President Hugo Chavez, Venezuela used to give heating oil to poor Americans for free as recently as 2012, noted Policy Mic.

Now, the Venezuelan government only operates two days a week in an effort to save electrical power, reports The New York Times.

President Nicolas Maduro (pictured) declared a state of emergency, which many fear signals an imminent government collapse. Those type of signals often cause other countries to devalue a nation’s currency, which results in runaway inflation. Venezuela’s currency, the bolivar, has dropped to almost no value.

On top of inflation, Venezuela has had to deal with the dramatic drop in world oil prices. The country used to be rolling in money because it has the biggest oil reserves in the world. The socialist nation didn’t save oil revenue money, and has fallen into a severe economic crisis.

A water shortage at the University of the Andes Hospital in Merida means medical personnel are not able to wash blood off of an operating table, notes The New York Times. The hospital’s doctors have to use bottled seltzer water to prep their hands for surgery.

In Barcelona, two premature babies died while being transported to a public clinic because the ambulance lacked oxygen tanks. The Luis Razetti Hospital lacks working X-ray and kidney dialysis equipment. The hospital beds are full, so some patients use the floor, where they lie in their own blood.

Political opponents of Maduro passed a law in January that allows the poverty-stricken country to accept aid from other nations for its public health care system.

Maduro has rejected that international aid, which he sees as a move to undermine his authority and privatize the public hospital system.

“I doubt that anywhere in the world, except in Cuba, there exists a better health system than this one,” Maduro has stated.

“There are people dying for lack of medicine, children dying of malnutrition and others dying because there are no medical personnel,” Dr. Yamila Battaglini, a surgeon at Luis Razetti Hospital, said.

The hospital cannot print X-rays, so patients have to photograph their X-rays with their own smartphones and take the pictures to their doctors.

When patients need medications or equipment for their surgery, the doctors give the relatives a list of what is needed. The relatives must then buy what’s on the list from the black market because Venezuela’s government can’t afford to purchase the items.

Patients also have to supply basic items for a hospital stay, such as blankets, sheets, pillows, diapers and toilet paper.

According to the Daily Mail, Maduro often accuses the U.S. of illegally interfering with his country.

Maduro held a news conference in his presidential palace on May 17, and said U.S. planes “with lethal technical abilities” had twice violated his country’s airspace in seven days.

“Our military aviation detected the illegal entry, for unusual espionage tasks, of the Boeing 707 E-3 Sentry, which is an airborne early warning control center system that has all the mechanisms for espionage,” Maduro said.

It’s not clear what the U.S. would supposedly want to steal from the economically ravaged country.

RELATED : How Will You Get The Food For Your Family When Supermarkets Aren’t an Option Anymore – Learn From The Native Americans

Venezuela, where a hamburger is officially $170.  Caracas (AFP) – If a visitor to Venezuela is unfortunate enough to pay for anything with a foreign credit card, the eye-watering cost might suggest they were in a city pricier than Tokyo or Zurich.

But of course no merchant is pricing at the official rate imposed under currency controls. It’s the black market rate of 1,000 bolivares per dollar that’s applied.

But for Venezuelans paid in hyperinflation-hit bolivares, and living in an economy relying on mostly imported goods or raw materials, conditions are unthinkably expensive.

Even for the middle class, most of it sliding into poverty, hamburgers and hotels are out-of-reach excesses.

“Everybody is knocked low,” Michael Leal, a 34-year-old manager of an eyewear store in Caracas, told AFP. “We can’t breathe.”

In Chacao, a middle-class neighborhood in the capital, office workers lined up outside a nut store to buy the cheapest lunch they could afford. Nearby restaurants were all but empty.

Superficially it looked like the center of any other major Latin American city: skyscrapers, dense traffic, pedestrians in short sleeves bustling along the sidewalks.

But look closely and you can see the economic malaise. Many stores, particularly those that sold electronics, were shuttered.

“Nobody is buying anything really. Just food,” she said as a male customer used a debit card to pay for a couple of razor blades.

A sign above the register said “We don’t accept credit cards.”

They were all virtually deserted except for bored sales staff.

Instead a line of around 200 people was waiting patiently in front of a pharmacy.

They didn’t know what for, exactly, just that the routine now was to line up for daily deliveries of one subsidized personal hygiene product or another — toothpaste, for instance — and grab their rationed amount before it ran out, usually within a couple of minutes.

“We do this every week. And we don’t know what we’re trying to buy,” said Kevin Jaimes, a 21-year-old auto parts salesman waiting with his family.

“What’s frustrating is when you get into a gigantic line but they run out before you get any.”

The alternative then is to turn to black market merchants who sell goods at grossly inflated rates, often 100 times more than the subsidized price tag.

Jaimes lives with his family of seven, and tries to get by on a monthly salary of 35,000 bolivares — in reality, around $35.

That sum is too paltry for him to even think about dropping into the cinema upstairs in the center, where tickets are 8,800 bolivares.

If somehow he could, he’d find the same sort of entertainment being shown in American multiplexes: “The Jungle Book,” “Captain America: Civil War,” and “Angry Birds.”

But motion pictures and popcorn, while maybe an enticing diversion, are luxuries Venezuelans these days can ill afford.

RELATED : George Soros Is Collapsing the US Dollar Which Will Lead to WW III.

KEEP IN MIND THAT LIFE WITHOUT  ELECTRICITY, RUNNING WATER AND HEAT IS A FAR DIFFERENT WORLD THAN WHAT WE ARE USED TO HERE IN AMERICA.  SURVIVAL OF YOUR CHILDREN TOTALLY DEPENDS ON YOU!

What did the late President Hugo Chávez and the United Socialist Party of Venezuela do to lead the country down this path? What has new President Nicolás Maduro done as he’s ruled the country by decree? Why aren’t you hearing more about the origin of these economic problems and what does this mean for neighboring countries?

Stockpiling Food Might Be Your Best Investment Preparing for a Disaster, What Makes the Best Survival Food for an Emergency?

Why America’s Response to Coronavirus Adds Disaster to Catastrophe