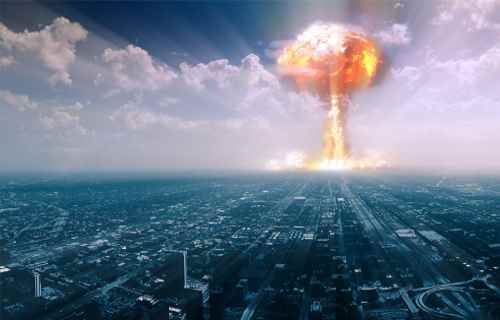 Oxford science report warns of catastrophic wipeout of human civilization from asteroids, viral pandemics and the rise of the robots

There are a host of existential threats that could wipe out humanity, from virulent viruses to the development of artificial intelligence. According to a recent ominous report, however, government institutions are not taking apocalyptic threats seriously enough.

Climate change, nuclear winter, super volcanoes and asteroids were among the threats that pose an existential threat to humanity. Although these threats may sound like science fiction, the researchers warn that many people do not realize how probable these scenarios really are.

The report was released by the Global Challenges Foundation and the Global Priorities Project in collaboration with the University of Oxford, and rates significant threats that could kill 10 percent of the population.

Although major catastrophes, such as asteroids or super volcano eruptions, do not occur in most people’s lifetime, other plagues, like the 1918 Spanish flu, occur more often than most people think.

In an interview with the Press Association, Sebastian Farquhar, director at the Global Priorities Project, said: “There are some things that are on the horizon, things that probably won’t happen in any one year but could happen, which could completely reshape our world and do so in a really devastating and disastrous way.

“History teaches us that many of these things are more likely than we intuitively think.

“Many of these risks are changing and growing as technologies change and grow and reshape our world. But there are also things we can do about the risks.”

According to the report, the most likely catastrophes to plague humanity in the next five years include a major asteroid impact, the eruption of a super volcano and unforeseen threats. Catastrophes that threaten humanity in the long-term include climate change, nuclear war, pandemics and the development of artificial intelligence (A.I.).

Farquhar added: “There is really no particular reason to think that humans are the pinnacle of creation and the best thing that is possible to have in the world.

“It seems conceivable that some AI systems might at some point in the future be able to systematically out-compete humans in a bunch of different domains and if you have a sufficiently powerful form of that kind of artificially intelligent system, then it might be the case that if its goals don’t match with what humanity’s values are then there might be some sort of adverse consequences.

Natural and man made pandemics, in addition to nuclear war, were the greatest threats to civilization at large, the report stated.

Mr. Farquhar commented there is no evidence that militant groups like the Islamic State will be able to cook up a deadly virus in the lab and unleash it onto the masses anytime soon, but it could happen in the far future.

“We have seen that in the field of synthetic biology and genetic manipulation of small organisms or things like viruses, the cost has come down unbelievably in the last decade.

“It is still too expensive to worry about rogue groups trying to use the technology, but that might not remain true.”

The report urges international communities to better prepare for pandemics, research possible threats posed by AI and biotechnology, and to reduce the number of nuclear weapons.

“What is really important to remember is that many of these risks don’t stop at the borders and wait patiently for their passports to be checked, they are truly global in nature,” Mr Farquhar said.

“This is not the sort of thing where one country can say ‘Oh well we are prepared and the rest of the world can fend for itself’. That is one of the things we saw with the Ebola crisis is how this thing spilled over national borders,” he added.(source)

Could An Asteroid Or Comet End The World? Homo sapiens have roamed the earth for around half a million years, human population has soared to over 7.1 billion people, life expectancy continues to rise at a dramatic rate, with people living over 10 years longer now than just 40 years ago. With humanity seemingly thriving it may be hard for us to really envision a world without human existence, yet it’s not only Hollywood movies that depict human extinction, with many leading scientists predicting extinction in the not so distant future. It is estimated that More than 99% of all species that have ever lived on Earth are now extinct, so it may not be a question of if, but when and how are we going to join them?

On the 15th of February 2013 a 17m 10,000-tonne space rock hurtled into the skies above Russia, traveling at speeds of above 40,000 mph, when it hit earths atmosphere,it exploded around 15 miles above the earths surface with the force of 40 Hiroshima atomic bombs, injuring over 1500 people. It left some suffering skin and retinal burns from the fireball which at it’s peak was over 30 times brighter than the sun. This was the largest of it’s kind since the 1908 Tunguska event in which an asteroid or comet believed to be somewhere in the region of 60 to 190m in size, exploded 3-6 miles above Siberia, leveling over 80 million trees over an area of 830 sq m, with an explosion 1000 times greater than the Hiroshima atomic bomb, had it struck over London it would leveled everything inside of the m25.

RELATED : US Scientist Confirms Russian Fears Of Nibiru Planet, Could Begin to Harm Our Earth this Month

While relatively small in comparison to anything that would threaten humanities existence, it does serve as a reminder to the dangers that larger near earth objects possess. Could a doomsday rock be more than just a plot to Hollywood films such as 1998’s Deep Impact and Armageddon? If history is anything to go by then yes, On average asteroids 1km or larger hit earth every 500,000 years, While an asteroid around one kilometer in diameter could plausibly cause global catastrophe it would most likely take something several kms in diameter to threaten our existence.

Around 66 million years ago, an object about 6 miles in diameter is believed to have smashed into what is now the Yucatan Peninsula in Mexico, leading to the demise of the dinosaurs, as well as most plant and animal life on Earth. While a few small mammals survived, anything as large as humans would have almost certainly been wiped out. A more recent example of a large scale collision in our solar system occurred in 1994 when comet shoemaker-levy 9 broke apart and 21 fragments, some as large as 2km in diameter, crashed into Jupiter, the impact of just one of the pieces was estimated to have released an energy equivalent of 600 times that of the entire nuclear arsenal we have on Earth.

The dark cloud of the explosion shown in this photo sequence is larger than our entire planet Earth. While Shoemaker-Levy 9 demonstrates that massive cosmic collisions can still occur in our backyard, it also highlights the important role that the largest planet in our solar system plays, Described as a cosmic vacuum cleaner or liver for the inner solar system, Jupiter, with it’s strong gravitational influence, is capable of catapulting comets that might hit Earth out of the Solar System and is also thought to have a cometary impact rate thousands of times higher than that on Earth.

Not just a protector that throws comets out of the inner solar system, Jupiter, also turns menace when throwing comets into the inner solar system or pushing asteroids in the belt towards the sun where they have the possibility of hitting Earth. Some Astronomers have suggested that without Jupiter to sweep up potential impactors, extinction events might have been more frequent on earth, which may have prevented complex life from developing. It may come as some comfort to know NASA has found and is tracking around 95% of all objects flying near earth that are 1km in diameter or larger.

While the chances of a major collision are not high in the short term, there is a high probability that eventually one will hit us. In a perfect world we’d spot the threat decades in advance and launch gravity tractors to slowly push it off course, but what if we only had months before impact? When NASA’s Chief Charles Bolden was asked what could we currently do about unknown asteroids and comets that may be on a collision course with Earth. his response?… “Pray”.

KEEP IN MIND THAT LIFE WITHOUT  ELECTRICITY, RUNNING WATER AND HEAT IS A FAR DIFFERENT WORLD THAN WHAT WE ARE USED TO HERE IN AMERICA.  SURVIVAL OF YOUR CHILDREN TOTALLY DEPENDS ON YOU!

Warning :Prepare for the Climatic Collapse of Civilization