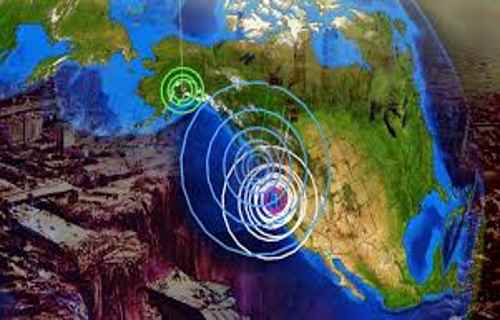 FEMA is planning for an earthquake that would devastate the Pacific Northwest, killing at least 13,000 people.

To the north of California’s famous San Andreas fault is a less known, but possibly more deadly, fault line. The Cascadia subduction zone runs some 700 miles from northern California to Vancouver.
In a deeply reported article for The New Yorker, Kathryn Schulz tells the tale of how this fault lies dormant for periods of 243 years, on average, before unleashing monstrous tremors. The Pacific Northwest is 72 years overdue for the next quake, which is expected to be between 8.0 and 9.2 in magnitude.

At the upper end of that scale, Schulz notes, we would experience “the worst natural disaster in the
history of North America.” (The major 2011 earthquake in Japan was a 9.0, killing more than 15,000 people.)
The Federal Emergency Management Agency (FEMA) already has an emergency response plan for when this earthquake hits. Parts of FEMA’s quake expectations are truly terrifying. As Schulz writes:
FEMA projects that nearly thirteen thousand people will die in the Cascadia earthquake and tsunami. Another twenty-seven thousand will be injured, and the agency expects that it will need to provide shelter for a million displaced people, and food and water for another two and a half million.

On Tuesday, May 31st, 2016, President Obama met with the FEMA National Response Coordination Center in Washington DC to discuss the prevalent ways one should prepare for a national emergency, and/or any type of disaster — in preparation for the 2016 hurricane season, which is slated to begin on June 1st and end on November 30th.

RELATED : YOU ABSOLUTELY NEED FOOD STORAGE — HERE ARE SOME OF THE MOST IMPORTANT REASONS TO STORE EXTRA FOOD

In his speech, Obama also emphasized the importance of “preparation for any type of disaster,” the need for the FEMA app, seeking FEMA-related shelters in case of an emergency, as well as reminding us the “good deeds” of the Government Agencies/Alphabet Soups.

When these are the same Government Agencies/Alphabet Soups who are conspiring to militarize your police into a one-world police state, lock you away into detention-concentration camps, and take as many freedoms away from you as possible — courtesy 9/11, Sandy Hoax, and many other “conspiracies.”

Not to mention how they poison your food with GMOs, poison your water with fluoride, weaken your immune system and cause disease with chemtrails, and committing unspeakable crimes behind closed doors. But they’re serving to “Protect” you, aren’t they?!

What are they REALLY Preparing for?

And just WHAT is the Bigger Push that they’re Pushing?!?!

Another Whistleblower claims Planet X is heading towards Earth. Queen Elizabeth tells BBC staff that a “Dark Storm” is coming”

RELATED : The Damage Has Been Done And The Consequences Will Be Suffered: “Have a Healthy Storage of Food, Precious Metals and Necessary Supplies”

KEEP IN MIND THAT SURVIVAL OF YOUR CHILDREN TOTALLY DEPENDS ON YOU!