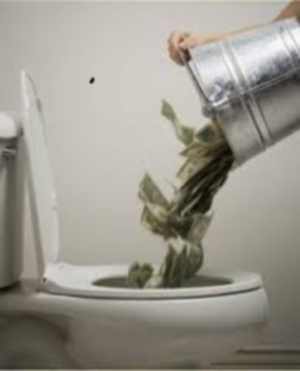 Economist Mike Shedlock defines money through the eyes of Austrian economist Murray N. Rothbard as “a commodity used as a medium of exchange.”

“Like all commodities, it has an existing stock, it faces demands by people to buy and hold it. Like all commodities, its price in terms of other goods is determined by the interaction of its total supply, or stock, and the total demand by people to buy and hold it. People buy money by selling their goods and services for it, just as they sell money when they buy goods and services.”

What is money when the system collapses and the SHTF?

In disaster situations, the value of money as we know it now changes, especially if we are dealing with a hyperinflationary collapse of the system’s core currency. This article discusses money as a commodity in an event where the traditional currency (US Dollar) is no longer valuable.

In a collapse of the system, there will be multiple phases, with the first phase being the “crunch”, as discussed in James Rawles‘ book Patriots. The crunch is the period of time directly preceding a collapse and the collapse itself.

Initially, the traditional currency system will maintain some value, though it may be rapidly depreciating in buying power. For those with physical, non-precious metal denominated currency on hand (paper dollars, non-silver coins), spending it as rapidly as possible is the best approach.

It is during the crunch that ATM machines around the country will run out of currency as people aware of the rapidly devaluing dollar will be attempting to withdraw as much money as possible. This immediate increase in money supply, coupled with the population’s general knowledge of the currency depreciation in progress, will lead to instant price increases for goods, especially essential goods.

If your physical cash has not been converted into tangible assets, this would be the time to do so. Acquiring as much food, fuel, clothing and toiletry items as possible would be the ideal way to spend remaining cash before it completely collapses to zero, as it did in the Weimar inflation in 1930′s Germany, or Zimbabwe’s hyperinflation in recent years.

During the initial phase of the ‘crunch’ precious metals will be a primary bartering tool, but this may not last long. The old survivalist adage “you can’t eat your gold” will become apparent very quickly. In a total breakdown of the system, food, water and fuel will be the most important tangible goods to acquire.

Consider someone who has a two week or one month supply of food on hand. Do you believe they would be willing to part with that food for some precious metals? The likely answer is no. There will be almost no bartering item that one would be willing to trade their food for once it is realized that food supply lines have been cut.

That being said, since most will not barter their food, not even for fuel, the next recognized medium of exchange by merchants, especially those selling fuel, will be precious metals. For the initial crunch, silver coins, especially recognizable coins like 90% silver quarters, dimes and half dollars, along with one (1) ounce government mint issued silver coins like US Silver Eagles, will be accepted by some, probably most, merchants. For those trying to flee cities to bug-out locations, silver coins of the aforementioned denominations may be a life saver, as they can be used to acquire fuel. While we recommend having gold, as well, the issue with gold is that its value is so much higher than that of silver, that breaking a one ounce gold coin into 10 pieces just to buy a tank of gas will not be practical. It is for this reason that having silver on hand is highly recommended. Packing at least $25 – $50 of silver coins in each bug-out bag would be a prudent prepping idea.

In a total SHTF scenario, silver and gold may eventually break down as a bartering unit, as contact with the “outside” world breaks down. One reason for this, is that the fair value price of precious metals will be hard to determine, as it will be difficult to locate buyers for this commodity.

This, however, does not mean that you should spend all of your precious metals right at the onset of a collapse. Precious metals will have value after bartering and trade is reestablished once the system begins to stabilize. Once stabilization begins, the likely scenario is that precious metals will be one of the most valuable monetary units available, so having plenty may be quite a benefit. At this point, they could be used to purchase property, livestock, services and labor.

Water is often overlooked as a medium of exchange, though it is one of the most essential commodities for survival on the planet. Had individuals in New Orleans stockpiled some water supplies during Hurricane Katrina, much of the loss of life there could have been avoided.

For those bugging out of cities, it will be impractical to carry with them more than 5 – 10 gallons of water because of space limitations in their vehicles. Thus, having a method to procure water may not only save your life, but also provide you with additional goods for which you can barter.

An easy solution for providing yourself and others with clean water is to acquire a portable water filtration unit for your bug-out bag(s). While they are a bit costly, with a good unit such as the Katadyn Combi water filter running around $150, the water produced will be worth its weight in gold, almost literally. This particular filter produces 13,000 gallons of clean water! A Must have for any survival kit.

Because we like reserves for our reserves, we’d also recommend acquiring water treatment tablets like the EPA approved Katadyn Micropur tabs. If your filter is lost or breaks for whatever reason, each tablet can purify 1 liter of water. In our opinion, the best chemical water treatment available.

Clean water is money. In a bartering environment, especially before individuals have had time to establish water sources, this will be an extremely valuable medium of exchange and will have more buying power than even silver or gold on the individual bartering level.

In a system collapse, food will be another of the core essential items that individuals will want to acquire. Survival Blog founder James Rawles suggests storing food for 1) personal use 2) charity 3) bartering.

Dry goods, canned goods, freeze dried foods can be used for bartering, but only if you have enought to feed yourself, family and friends. They should be bartered by expiration date, with those foods with the expiration dates farthest out being the last to be traded. You don’t know how long the crunch and recovery periods will last, so hold the foods with the longest expiration dates in your posession if you get to a point where you must trade.

Baby formula will also be a highly valued item in a SHTF scenario, so whether you have young children or not, it may not be a bad idea to stockpile a one or two week supply. (For parents of young children, this should be the absolute first thing you should be stockpiling!). In addition to water, baby formula may be one of the most precious of all monetary commodities.

Another tradeable food good would be seeds, but the need for these may not be apparent to most at the initial onset of a collapse, though having extra seeds in your bug-out location may come in handy later.

Fuel, including gas, diesel, propane and kerosene will all become barterable goods in a collapse, with gas being the primary of these energy monetary units during the crunch as individuals flee cities. For most, stockpiling large quantities will be impractical, so for those individuals who prepared, they may only have 20 – 50 gallons in their possession as they are leaving their homes. If you are near your final bug-out destination, and you must acquire food, water or firearms, fuel may be a good medium of exchange, especially for those that have extra food stuffs they are willing to trade.

Though we do not recommend expending your fuel, if you are left with no choice, then food, water and clothing may take precedence.

For those with the ability to do so, store fuel in underground tanks on your property for later use and trading.

Though firearms and ammunition may not be something you want to give up, those without them will be willing to trade some of their food, precious metals, fuel and water for personal security. If the system collapses, there will likely be pandemonium, and those without a way to protect themselves will be sitting ducks to thieves, predators and gangs.

Even in if you choose not to trade your firearms and ammo during the onset of a collapse, these items will be valuable later. As food supplies diminish, those without firearms will want to acquire them so they can hunt for food. Those with firearms may very well be running low on ammunition and will be willing to trade for any of the aforementioned items.

In James Rawles’ Patriots and William Forstchen’s One Second After, ammunition was the primary trading good during the recovery and stabilization periods, where it was traded for food, clothing, shoes, livestock, precious metals and fuel.

We may take it for granted now because of the seemingly endless supply, but clothing and footwear items will be critical in both, the crunch and the phases after it. Having an extra pair of boots, a jacket, socks, underwear and sweaters can be an excellent way to acquire other essential items in a trade.

As children grow out of their clothes, rather than throwing them away, they will become barterable goods.

It is recommended that those with children stock up on essential clothing items like socks, underwear and winter-wear that is sized a year or two ahead of your child’s age.

The above monetary units are essential goods that will be helpful for bartering in the initial phases of a collapse in the system. As the crunch wanes and recovery and stabilization begin to take over, other commodities will become tradeable goods.

In A Free Falling Economy Makes Bartering Go Boom, Tess Pennington provides some other examples of items that will be bartering goods during and after a crunch including, vitamins, tools, livestock, fishing supplies, coffee and medical supplies.

Another important monetary commodity after the crunch will be trade skills. If you know how to fish, machine tools, hunt, sew, fix and operate radioes, fix cars, manufacture shoes, or grow food, you’ll have some very important skills during the recovery period.

How Living Off the Grid Works

1 thought on “What is Money When the System Collapses?”