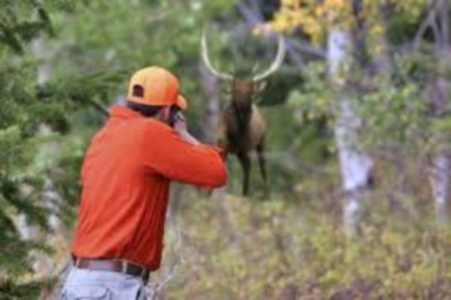 I know many hunters who think they will be able to rely on their skills when T-SHTF, that they will be able to take game in order to sustain their family over a sustained period of time.  In the short run this might be true, in the long run nothing could be further from the truth.  If you sit down and take a look at the basic math of the position I’m about to take on this subject, the conclusion is irrefutable.  Using the Whitetail Deer for my case study, let’s walk the dog on this one.

– In the late 1800′s the  Whitetail was almost hunted to extinction.

As man moved into the whitetail’s environment, he hunted them for food and more. Venison meat became popular and whitetails were almost hunted into extinction by the late 1800′s for their hides and meat. Venison was a delicacy and served in the finest restaurants from Chicago to New York. Refrigerated trains ran daily from the Midwest to these cites packed full of deer carcasses that had been harvested by professional hunters. People thought that the mid-western deer were an inexhaustible resource. They were wrong.

– Today the Whitetail Deer population is estimated to be at 20-25 million.

– Currently hunters must follow strict sets of rules, usually set by their state, including (but not limited to): Hunting Season Dates, Baiting Laws,  Bag Limits,Quotas, Weapon Restrictions, Controlled Area Hunts, not to mention the requirement to obtain the actual hunting license.

– In addition to those rules, hunters are bound by a set of ethics, awareness and sportsmanship.

– If T-SHTF, all of those rules, regulations and ethics go out the window.

– The obvious conclusion: A massive population (many of whom are armed) combined with a food shortage after T-SHTF will decimate the deer population (and other game) in short time.  The typical rules which exist to help regulate hunting will be out the window which will enable novice hunters to bag game.

Right about now you might be thinking about that time you sat in a tree stand for hours, not catching a glimpse of your elusive prey.  Remember if T-SHTF all of that goes out the window and it won’t take long for suburbanites to figure out they they can easily construct deer feeders or salt licks in order to bring their prey to them.

While these suburbanites might not own any Mossy Oak clothing or have the first clue on how to actually dress an animal after a kill, rest assured desperation will lead them to take down as many deer (and other game) as possible.  It doesn’t take much skill to toss a salt lick out and then set up 300 yards away with a Remington 700 and Leupold scope.

William R. Forstchen actually wrote about this phenomenon in his book One Second After, which followed a North Carolina town after an EMP strike hit the continental US.  I don’t recall the actual text from the book but do remember that even in their mountain town, once plentiful with game, it only took a few months for the game population to almost completely disappear.  Not a deer, squirrel or rabbit were to be found, they had all been hunted to the brink of extinction in order to feed the town.

So here is the bottom line.  While hunting should be considered a viable option for providing food for your family after T-SHTF do not overestimate how much game you will be able to take, especially in the long term.  Increased competition from (literally) thousands of other folks who will be desperate for food combined with traditional rules and regulations typically associated with hunting not being followed will quickly decimate the amount of available game for the taking, much like what occurred in the late 1800′s.  The numbers simply do not lie when it comes to analyzing the probability of this occurring.  Make sure to incorporate these factors into your prepping strategy and have a plan for additional ways to grow/gather food.