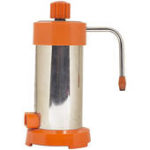 There are many types of emergency that can befall us, personal, familial, local, national and global. This is why we prepare, this is why we have back ups, and back ups for those back ups. Have you ever looked closely, really closely at your kit, in particular at your water filtration system? Will it actually do what you think it will do? Do you know the size of the filter in your system? Have you read the list of nasties that it will filter out? See anything missing from the list?

There are a great many viruses, and all of them will flourish if municipal water supplies fail. How fast they flourish depends on the weather, run off of untreated water into natural water courses, and how quickly humans soil the supply by indiscriminate disposal of animal and human waste.

West Nile virus, Coxsackie virus,hepatitis A, hepatitis E, adenovirus,reovirus, Calicivirus, poliomyelitis, and leptospirosis all have a size of 0.09-0.1 microns, this is smaller that the 0.2 micron pore size in the best of the best filters available today. All of these will increase if municipal water treatment is no longer available.

One of these, leptospirosis, is already in a great many fresh water supplies. Any situation that puts humans in contact with fresh water increases the risk of infection. It is endemic in tropical and sub-tropical regions, but not purely due to the climate. Many of these areas are in the developing world, and as such these areas have less treated water, less refuse collection services, and no pest control systems beyond those employed by individuals. This is exactly the situation we will find ourselves in if there is any event, natural or man made, that results in a long term breakdown of the power grid, which results in water treatment plants going offline. Those currently living an off grid lifestyle, or preparing to should some kind of collapse occur, should be aware of the dangers lurking in even the most pristine looking natural water supplies.

You may know leptospirosis as Weils disease, it’s a zoonosis, that is it can cross the species barrier from animals to humans. The animals themselves are asymptomatic, they show no signs of illness or disease. Leptospirosis is spread by infected urine, and less commonly by other bodily fluids. The spiral shaped bacteria are safe when dry, but live for an extended length of time in damp and wet conditions. They can, if they have not been dry for too long,  reactivate on contact with water. The prime sites for the bacteria to be found is in the water itself, alongside it on banks, under vegetation, mud, puddles and gardens where infected animals may have urinated.

A word about rodents, they are incontinent. If you have rats and mice, you have urine, it’s that simple. Although rodents are the main vector for leptospirosis all animals can carry it, including domestic pets. It gets into the body via mucosal tissue, such as the eyes or mouth, via abrasions and rarely by ingesting infected meat, though cooking well usually avoids this.

Any Holmes the Olympic rower died of leptospirosis in October 2010, it is thought he contracted the disease whilst practicing on the river.

It was questioned as to why a country as vast as the USA had such a low number of reported cases each year. The investigation concluded that the reporting system was flawed, and that based on the land mass and fresh water volume the USA would have in the region of 10,000 cases per year. They were at the time, reporting between 58 and 70 cases per year. The report concluded that under reporting is less important than under diagnosing and that continued under diagnosis could have serious implications for the population.

Current statistics show leptospirosis is present in some 20% of the fresh water supplies on the planet. This figure will grow should water treatment, refuse removal and pest control mechanisms fail. Most of those 20% are found in countries that do not have these safeguards.

The answer then is obviously to avoid it, but sadly that is not possible. For example, the Hardjo version of the disease affects only cattle, but it is fatal to humans, it is currently kept out of the food chain by the destruction of animals found to be carrying it. Without veterinary care and excellent husbandry standards this will not be the case..

Many things increase you chance of catching leptospirosis, anything putting you into contact with fresh water, or wild animals increases your risk.

How to minimise your risk

* stout walking boots, long trousers and long sleeves should be worn where there is a danger of scratch injuries
* waterproof thick gloves should be worn when drawing water, be it from a well, stream or river
* eye and mouth protection, as well as long sleeves and waterproof gloves should be worn during ANY contact with wild animals, especially so when removing them from traps, skinning or butchering them
* thick plastic bags should be worn over foot ware when in areas contaminated by livestock waste
* areas where children play, and wild animals/rodents have access to, should be treated with chlorinated water prior to them playing there
* water destined for human consumption should be treated even if it has been filtered.
* domestic pets should not be allowed in food preparation areas
* food prep area should be wiped with a chlorinated cloth before use
* hands should be washed in chlorinated water before entering the home
* get in the habit of not touching your eyes and mouth with you hands when out and about

The signs and symptoms of leptospirosis are varied and many. Most people, 60-65% will have a flu like illness for a week, this will be accompanied by severe headaches and possibly an occasional nosebleed. 25-30% will have a severe flu like illness accompanied by severe incapacitating headaches and nosebleeds.they may well show unexplained bruising. Some in this group will go on to develop kidney and liver function issues at a later date. 2-5% will die, having gone into kidney failure. For these people the headaches do not subside, they have frequent profuse nosebleeds and unexplained bruising on a large scale. This is due to clotting mechanism malfunctions.

Antibiotics kill leptospirosis, the cyclines are best but these must not be stored as they become toxic  their expiration date. Penicillin was once the treatment of choice and works well. Chlorine also kills leptospirosis, as does boiling the water before ingestion.

So, filter or not, boiling your water before drinking is still advisable. It should also be noted that some bacteria are smaller than 0.2 microns and would therefore not be removed by filtering.

Water does not have to be boiled for an extended period, this wastes time, fuel, and water in the form of steam. Raising the water to a rolling boil for one minute is enough to kill any viruses and bacteria present.

Water filtration systems have their place, and are great items to have, filtering out the vast majority of organic and inorganic impurities, just be aware of the capabilities of the system you have.

IF YOU HAVE THIS PLANT IN YOUR HOUSE, YOU WILL NEVER SEE MICE, SPIDERS AND OTHER INSECTS AGAIN!