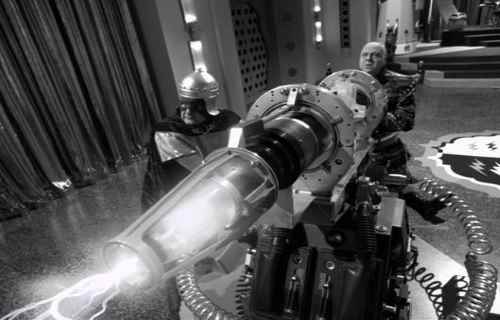 Anyone familiar with Nikola Tesla’s numerous experiments (especially those in Colorado Springs) would recognize that the strange Soviet super lightning bolts are probably the direct result of Russia’s use of the fantastically high power Tesla-style weather warfare attacks, nuclear fusion development, and the related particle beam death ray development. Tesla personally created lightning bolts about 1735 feet long, about 77 years ago.

19 years after the explosion in 1908 the forest at 13 miles out from the epicenter.The article in the June, 1976 issue of RADIO ELECTRONIC MAGAZINE described current US experimentation in creating gigantic Tesla-style man-made lightning and ball lightning (in the search for a fusion energy solution). However, the U.S. experiment is relatively tiny, compared to the massive Soviet efforts.

Tom Bearden is the foremost Nikola Tesla researcher…
A nuclear engineer, war games analyst, and military tactician, Lieutenant Colonel Bearden has over 26 years experience in air defense systems, tactics and operations; technical intelligence, anti-radiation missile countermeasures; nuclear weapons employment, computerized war games; and military systems requirements.
He is currently with the Alabama division of a large aerospace company where he is involved in determining the future requirements for laser weapons.
Lieutenant Colonel Bearden obtained a Master of Science degree in nuclear engineering from the Georgia Institute of Technology and a Bachelor of Science degree in mathematics from Northeast Louisiana University. He is also a graduate of the U.S. Army Command and General Staff College and several U.S. Army artillery and missile schools.
He has had direct experience with tube artillery and with the Ajax, Hercules, Hawk, and Patriot missile systems and the production of technical intelligence on Soviet surface-to-air missile systems for the U.S. Army/Department of Defense.

RELATED : EMP Rumors of War – How A Successful EMP Attack Could Bring Down America
Tom holds a Sandan (third degree black belt) in Yoseikan aikido; is a singer, guitarist and songwriter; member of Mensa, Society for the Investigation of the Unexplained, Vestigia, the American Association of Meta-Science: and is on the board of governors of the U.S. Psychotronics Association. In addition, he is Alabama Director of a small nonprofit foundation, the Association of Distinguished American Scientists and is a MUFON adviser on nuclear engineering.

In January 1960, Khrushchev announced the development of a new, fantastic weapon—one so powerful it could wipe out all life on earth if unrestrainedly used. The New York Times printed part of the story. Khrushchev, of course, was referring to the newly emerging scalar EM weapons. So in early 1960 the Soviets were in at least what we call the engineering development stage for large scalar EM beam weapons, which would be deployed when finished.

On May 1, 1960 Soviet defensive radars—rigged as prototype scalar EM beam weapons—probably downed Francis Gary Powers’s high-flying U-2 reconnaissance plane over the Soviet Union, precipitating a major diplomatic incident. At the time, no Soviet surface to-air missile could reach the high-flying U-2, but of course it was extensively tracked on Soviet defense radars. Powers reported that a flash occurred behind his plane and persisted—almost certainly the signature of time reversed wave real-time holography. Eisenhower first denied, then was forced to admit, the photo-reconnaissance nature of Powers’ mission when Khrushchev revealed that the Soviets had captured Powers alive. Khrushchev then cancelled a major summit meeting with President Eisenhower. Powers was imprisoned, and released in February 1962 in exchange for Rudolf Abel, a convicted Soviet spy.

In the fall of 1962, with his new super weapons nearing deployment, the ebullient Khrushchev could no longer contain his eagerness. He “jumped the gun” and attempted to change the international balance of power at a single stroke. The Soviets started inserting MRBMs—weapons which would blanket the U.S. like a glove—into Cuba at a feverish pace.
Accordingly, as soon as his new super weapons were deployed and ready, Khrushchev did that “something dramatic.” On April 10, 1963 he destroyed the U.S.S. Thresher with one of his new weapons. Scalar EM (electrogravitational) beams, focused through the ocean to interfere on the Thresher under the surface, recreated spurious EM energy in the sub’s electrical control circuits, jamming them so that the sub lost control, sank to crush depth, and imploded. Spurious electromagnetic “splatter” surrounding the immediate vicinity of the targeted area left a signature of intense EM interference with multiple systems and multiple frequencies of the U.S.S. Skylark, surface companion of the Thresher. This anomalous EM interference was so virulent that it required over 1-1/ 2 hours for the Skylark to transmit an emergency message back to headquarters that the sub had been lost.

In matters of defence, no government will ever openly disclose its best military assets unless forced to do so. And thus, many military capabilities may be developed and kept secret for a long time. Indeed, even when they are used for the first time, depending upon the technology itself, it may well be the case that disclosure is not a necessary consequence. For even existing and widely known weapons can be used without ever any issues of acknowledgement arising. By way of example, one could attack another country with a reasonably low yield nuclear weapon set off deep underground. The damage would mirror that of a strong earthquake, and thus the fact that an actual weapon was used, or that a specific country was behind the attack, might never become known.

If the European Union breaks apart, and it looks like it may, the Euro currency (the second most used currency in the world) will vanish. Neocons, CIA and the “deep state” in the U.S.. NATO in Europe. Who else is being aggressive in our world towards other nations? Who else is continually poking Russia and China to provoke a war?
The endless ponzi schemes like QE, ZIRP and the US dollar itself. The world reserve currency is the US dollar and this has allowed the US Treasury, in conjunction with the Federal Reserve, to export our inflation to other countries around the world.
Now is the time to either redouble your prepping efforts or make a serious dedication to getting your preps in order. Ukraine, Syria, Libya, Afghanistan, South China Sea and these are the just the ongoing military wars.

Russia is preparing to test-fire a nuclear weapon which is so powerful it could reportedly destroy a whole country in seconds.

This Secret Weapon is rumoured to be the most powerful ever designed and is equipped with stealth technology to help it dodge enemy radar systems .

This terrifying doomsday weapon is likely to strike fear into the hearts of Western military chiefs, as current missile defence technology is totally incapable of stopping it.

The Secret Weapon is expected to be capable of delivering up to a dozen warheads, allowing to effectively destroy an area the “size of Texas or France”, the broadcaster continued.

It is expected to have a range of 10,000 km, allowing Moscow to attack European cities including London as well as major cities on America’s west and east coasts.

That fearsome weapon? An electromagnetic pulse. Pry, executive director of the EMP Task Force on National and Homeland Security, a congressional advisory board, described a scenario in which an adversary could detonate a nuclear device in the atmosphere over the United States, which would in turn generate an EMP that would cause catastrophic damage to the nation’s electricity grid, resulting in long-term, national power outages.

It is, indeed, a frightening scenario—and it isn’t the only threat to the nation’s electricity grid. U.S. critical infrastructure is also vulnerable to cyber and physical attacks. The risk of such attacks is real, and, in some cases, growing. But don’t run out and stock your bomb shelter with whale oil just yet. In fact, odds are you have far more to fear from nut-obsessed squirrels than nutty extremists when it comes to the reliability of your electricity.

The grim power of modern nuclear weapons.The greatest minds of the military-industrial complex have spent the past century devising ever more destructive weapons. In our timeline of terror, we show the horrifying development of modern nuclear weapons, which are now so powerful they can wipe out an entire city in seconds and render much of a country uninhabitable.

With tensions between Russia and the West rising, it is said the new bomber will be capable of striking any target on the planet within two hours.

According to the Strategic Missile Forces Academy, the engine will operate in two modes – using kerosene fuel for conventional flight and a methane-oxygen combination to power the craft into space.

The craft’s shape also mimics the design of the US Stealth Bomber – making it invisible to radar.
Do you think that this weapon could actually wipe out the USA in reality?

Feds to Americans: You Need to Prepare for Life Without Electricity ( This is why 90% of the population wouldnt survive )