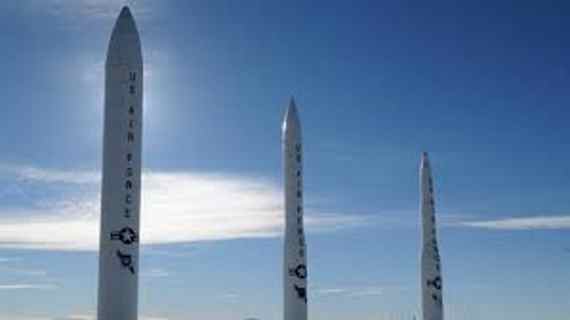 Did you know that Washington keeps 450 nuclear ICBMs on “hair-trigger alert”? Washington” The reasoning, if it can be called reason, is that by being able to launch in a few minutes, no one will try to attack the US with nuclear weapons. US missiles are able to get on their way before the enemy’s missiles can reach the US to destroy ours.

If this makes you feel safe, you need to read Eric Schlosser’s book, Command and Control.

The trouble with hair-triggers is that they make mistaken, accidental, and unauthorized launch more likely. Schlosser provides a history of almost launches that would have brought armageddon to the world.

In Catalyst, a publication of the Union of Concerned Scientists, Elliott Negin tells the story of Soviet Lt. Col. Stanislav Petrov. Just after midnight in 1983 the Soviet Union’s early warning satellite system set off the alarm that 5 US ICBMs were headed for the Soviet Union.

Col. Petrov was supposed to inform the Soviet leader, who would have 8 to 10 minutes to decide whether to launch in retaliation. Who knows what he would have decided. Instead Col. Petrov used his judgment. There was no reason for the US to be attacking the Soviet Union. Moreover, Petrov reasoned that an American attack would involve hundreds of ICBMs, possibly thousands. He checked whether Soviet ground-based radar had detected incoming ICBMs, and it had not. Petrov decided it was a false alarm, and sat on it.

It turned out that the early warning system had mistaken a pattern of sunlight reflection on clouds as missiles. This was a close call, but Negin reports that “a failed computer chip, and an improperly installed circuit card are some of the culprits” that could initiate nuclear war. In other words, the sources of false alarms are numerous.

Fast forward to today. Imagine an American officer monitoring the US early warning system. This officer has been listening to 15 years of war propaganda accompanied by US invasions and bombings of 8 countries. Terrorist warnings and security alerts abound, as do calls from American and Israeli politicians for nuking Iran. The media has convinced him that Russia has invaded Ukraine and is on the verge of invading the Baltics and Poland. American troops and tanks have been rushed to the Russian border. There is talk of arming Ukraine. Putin is dangerous and is threatening nuclear war, running his strategic bombers close to our borders and holding nuclear drills. The American officer has just heard a Fox News general again call for “killing Russians.” The Republicans have convinced him that Obama is selling out America to Iran, with Senator Tom Cotton warning of nuclear war as a consequence. We will all be killed because there is a Muslim in the White House.

Why isn’t anyone standing up for America, the patriotic American officer wonders, just as the alarm goes off: Incoming ICBMs. Are they Russian or Iranian? Was Israel right after all? A hidden Iranian nuclear weapons program? Or has Putin decided that the US is in the way of his reconstruction of the Soviet Empire, which the American media affirms is Putin’s goal? There is no room for judgment in the American officer’s mind. It has been set on hair-trigger by the incessant propaganda that Americans call news. He passes on the warning.

Obama’s Russophobic neocon National Security Advisor is screaming: “You can’t let
Putin get away with this!” “It might be a false alarm,” replies the nervous and agitated president. “You liberal pussy! Don’t you know that Putin is dangerous!? Push the button!”

And there goes the world.

Considering the extreme Russophobia being created among Americans by the Ministry of Propaganda, the demonization of Vladimir Putin–the “new Hitler,” Vlad the Impaler– the propagandistic creation of “the Russian threat,” the crazed neocon desire for US world hegemony, the hatred of Russia and China as rising rivals capable of exercising independent power, the loss of American Uni-power status and unconstrained unilateral action. In the midst of these emotions and minds swayed not by facts but by propaganda, hubris, and ideology, there is a great chance that Washington’s response to a false alarm will bring the end of life on earth.

How much confidence do you have in Washington? How many times has Washington–especially the crazed neocons–been wrong?

Remember the 3-week “cakewalk” Iraq war that would cost $70 billion and be paid out of Iraqi oil revenues? Now the cost is $3,000 billion and rising, and after 12 years the radical Islamic State controls half of the country. To pay for the wars the Republicans want to “privatize,” that is, take away, Social Security and Medicare.

The frustrations of these defeats have mounted in Washington and in the military. The myth is that we lost because we didn’t use our full force. We were intimidated by world opinion or by those damn student protesters, or blocked from victory by some gutless president, a liberal pussy who wouldn’t use all of our power. For the right-wing, rage is a way of life.

The neocons believe fervently that History has chosen America to rule the world, and here we are defeated by Vietnamese guerrillas, by Afghan tribesmen, by Islamist fundamentalists, and now Putin has sent his missiles to finish the job.

Whoever the White House fool is, he will push the button.

The situation is deteriorating, not improving. The Russians, hoping for some sign of intelligence in Europe, contradict Washington’s anti-Russian lies. Washington calls truthful contradiction of its own propaganda to be Russian propaganda. Washington has ordered the Broadcasting Board of Governors, a US government agency, headed by Andrew Lack, a former chairman of NBC news, to counteract an alleged, but non-existent, “Kremlin Troll Army” that is outshouting the Western prostitutes and “perpetuating a pro-Russian dialogue” on the Internet. In case you don’t remember, Lack is the idiot who declared RT to be a “terrorist organization.” In other words, in Lack’s opinion, one that he can enforce, a truth-teller is a terrorist.

Lack epitomizes well Washington’s view of truthful reporting: If it doesn’t serve Washington’s propaganda, it is not true. It is terrorism.

Lack hopes to control RT with intimidation: In effect, he has told RT to shut up and say what we want or we will close you down as a terrorist organization. We might even arrest your American employees as aiders and abettors of terrorism.

To counteract a Revanchist Russia and its Internet Troll Army, the Obama regime is handing $15,400,000 to the insane Lack to use to discredit every truthful statement that emerges from the English language versions of Russian media. This amount, of course, will rise dramatically. Soon it will be in the billions of dollars, while Americans are evicted from their homes and sent to prison for their debts.

In his budget request, Lack, who seems to lack every aspect of humanity, including intelligence, integrity, and morality, justified his request, which will be granted, for the hard-earned money of Americans, whose standard of living is falling, with the wild assertion that Russia “threatens Russia’s neighbors and, by extension, the United States and its Western allies.”

Lack promises to do even more: “The US international media is now set forth to refute Russian propaganda and influence the minds of Russians and Russian-speakers in the former Soviet Union, Europe and around the world.” Lack is going to propagandize against Russia inside Russia.

Of course, the CIA organizations–the National Endowment for Democracy and Radio Free Europe/Radio Liberty–will be enriched by this anti-Russian propaganda campaign and will support it wholeheartedly.

Therefore, the Union of Concerned Scientists’ call for cooperation with Russia to take ICBMs off hair-trigger status is unlikely to occur. How can nuclear tensions be reduced when Washington is building tensions as fast as it possibly can? Washington’s Ministry of Propaganda has reconstructed Putin as Osama bin Laden, as Saddam Hussein, demonized figures, bogymen who evoke fear from the brainwashed American sheeple. Russia is transformed into al Qaeda lusting for another attack on the World Trade Center and for the Red Army (many Americans think Russia is still communist) to roll across Europe.

Gorbachev was a trick. He deceived the old movie actor. The deceived Americans are sitting ducks, and here come the ICBMs. The crazed views of the American politicians, military, and people are unable to comprehend truth or to recognize reality.

The propagandistic American “media” and the crazed neoconservatives have set humanity on the path to destruction.

The Union of Concerned Scientists, of which I am a member, need to come to their senses. It is impossible to work out a reduction in nuclear threat as long as one side is going all out to demonize the other. The demonization of Russia and its leader by the New York Times, Washington Post, CNN, Fox News, and the rest of the American Propaganda Ministry, by almost the entirety of the House and Senate, and by the White House makes reducing the threat of nuclear war impossible.