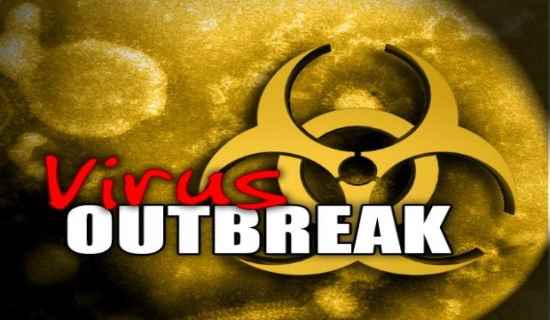 Dengue Hemorrhagic Fever is now spreading in the US and a man infected with Zika virus in Puerto Rico has died from complications of the infection, health officials said Friday.

The man, in his 70s, died from internal bleeding caused by a rare immune reaction to the virus, the Centers for Disease Control and Prevention said.

It’s the first death in the United States from Zika virus.

“This demonstrates that, as with Guillain Barre Syndrome cases, that there can be severe manifestations that result from Zika virus infection,” the CDC’s Tyler Sharp told NBC News.

The victim had a condition called thrombocytopenia — low platelet count that can result in bleeding. Sharp said it’s a rare but known complication of Zika and not a sign that the virus is causing worse symptoms than expected.

Zika’s spreading fast across Latin America and the Caribbean. The U.S. territory of Puerto Rico’s been hit hard, too.

Sharp, an epidemiologist at the CDC Dengue Branch in San Juan, Puerto Rico, said the man who died developed the low platelet count as a severe side-effect of infection with Zika. It’s called immune thrombocytopenic purpura.

“With immune thrombocytopenic purpura cases, our best understanding is those antibodies that normally would be directed against Zika are actually directed against platelets,” Sharp said. “It’s the immune system attacking the host.”

Platelet counts fall, the blood doesn’t clot well and a patients can develop bleeding — usually not severe, but sometimes severe enough to cause shock. It can be caused by a number of infections.

RELATED : Why I Will Not Submit To Medical Martial Law

“If people get an illness with fever and rash, and especially if they develop any bleeding manifestations, they need to seek immediate medical care.”

Dengue and chikingunya virus, both relatives of Zika, are also circulating in Puerto Rico. Dengue infection can cause dengue hemorrhagic fever, which can be deadly, especially if not treated quickly.

The CDC and Puerto Rico health department reported the death in a regular update on Zika. Health officials said they tested more than 6,000 people for Zika infection. About 11 percent of them — 683 people — had Zika.

Of them, 65 are pregnant women. And 17 patients, or 2 percent of all, were sick enough to require hospitalization, the CDC team reported. Five had Guillan-Barre, a paralyzing syndrome that can follow many different infections and that’s now being noted as Zika infects hundreds of thousands of people in the Americas.

Zika normally causes very mild symptoms. Doctors are not sure why it has started causing severe birth defects and immune system reactions like Guillain Barre as it spreads across Latin America. It could be the virus has changed somehow, or it could be that because so many people are being infected all at once, normally rare complications are being seen more commonly.

The most common symptoms in Puerto Rico were rash, muscle aches, headache and fever. In other outbreaks, up to 80 percent of those infected never even had symptoms, but it’s not clear how many people in Puerto Rico have been infected and not known it. 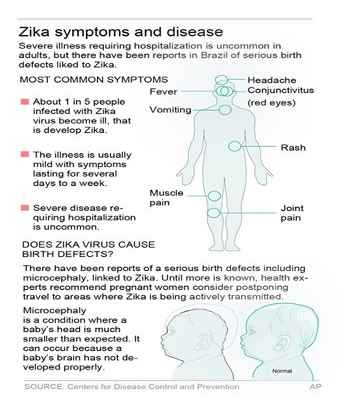 Complications such as immune thrombocytopenic purpura have been reported in Zika cases before, but patients usually recover. Sharp said the man who died had other health conditions, too.

Dr. Peter Hotez, a tropical medicine specialist at the Baylor College of Medicine, said the death in Puerto Rico does not set off alarm bells in his head.

“I don’t think we are going to see a lot of mortality from Zika virus,” Hotez told NBC News. The bigger worry, he said, is birth defects.

Zika causes severe brain damage in developing fetuses if the mother is actively infected while pregnant. Doctors do not yet know how many pregnant women will have children with birth defects as a result of Zika.

Sharp says it’s a reminder that people need to do what they can to avoid mosquito bites where Zika is circulating. That includes using repellents, wearing long-sleeved clothing and staying inside behind screened windows when possible.

“Although Zika virus-associated deaths are rare, the first identified death in Puerto Rico highlights the possibility of severe cases, as well as the need for continued outreach to raise health care providers’ awareness of complications that might lead to severe disease or death,” Sharp and other health officials wrote in a CDC report.

Dengue is caused by any one of four related viruses transmitted by mosquitoes. There are not yet any vaccines to prevent infection with dengue virus and the most effective protective measures are those that avoid mosquito bites. When infected, early recognition and prompt supportive treatment can substantially lower the risk of medical complications and death.

RELATED : What creates food crises? — How to Prepare For the Coming Food Crisis

Dengue has emerged as a worldwide problem only since the 1950s. Although dengue rarely occurs in the continental United States, it is endemic in Puerto Rico and in many popular tourist destinations in Latin America, Southeast Asia and the Pacific islands. 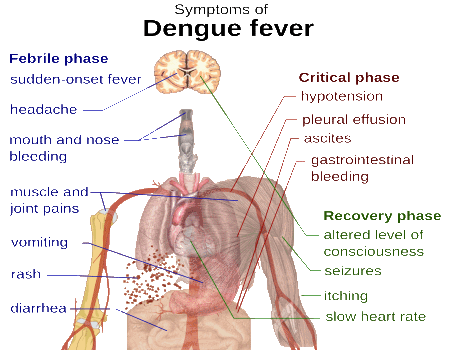