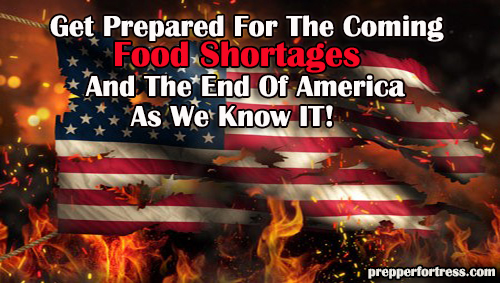 What is your greatest fear when it come to a collapse of civilization?

If you don’t think the food shortages are coming and coming soon, you haven’t been paying attention to what the Fed has done over the last 5 years and what President Obama is doing.

When food shortages will finally hit, and it will, more than 50 percent of Americans will be completely wiped out in just a few weeks. And then what do you think will happen.

So what are the 5 signs we are heading for food shortages or economic doomsday like the world has never seen before?

1. Almost one quarter of all Americans have amassed more credit card debt than they have in emergency savings. That means when massive layoffs start happening, people will only have a few weeks of savings before they are wiped out and won’t even be able to afford groceries. And they will still have to pay their credit cards, all that while draining their almost non existent savings.

2. A full 62 percent of Americans are living paycheck to paycheck and when they lose their jobs, they can’t buy groceries, they can’t pay their bills, they can’t put gas in their cars and so on. Only 38% percent of people surveyed can cover a $500 repair bill, much less keep things going for even a couple of weeks with no pay.

3. Stocks are facing an absolutely monumental crash – Corporate debt is back to 2007 PEAK levels. Margin debt which is money borrowed to buy stocks is at 2007 PEAK levels. China’s GDP numbers are a total fiction. China’s rail freight volume is at a 24 year low. We are in a global economy that when investors see the full impact and the market starts to slide, it will be a huge sinkhole of wealth destruction.

4. The Economic disaster Greece is facing – How Greece has managed to hold on without total collapse is anyone guess, but there is a looming disaster just waiting to happen in Europe over Greece. They can’t pay their bills and have agreed to a 4 month extension of loan guarantees from the European Union while on the other hand their new Socialist government under Price Minister Alexis Tsipras has already said he will not pay Greek debt to the EU, but the EU just loaned him even more money.

A protest group called ANTARSYA has called for defaulting on Greece’s debt, and nationalization without compensation of major industries, banning of lay-offs, the disarmament of the police, full political and social rights for immigrants. Sure, please tell us what fantasy land that can happen in. Nothing like good old Socialism with no means of financial support to ruin an economy.

Of course it gets worse, you didn’t think we were done yet, did you?

This is a good one and just what you’ve been waiting for. Get this…

5. The US Treasury is spending billions of dollars they won’t even account to Congress for. It’s hard to believe we have come to the point in this country where Congress asks the United States Treasury to account for 3 billion in Obamacare payments and they flat out tell Congress, NO!

Astoundingly Rep Paul Ryan has asked the treasury to explain why $3 billion in payments were made to health insurers even though Congress never authorized the spending through annual appropriations and the Treasury Department told him flat out, they would not comply.

If the treasury under the Obama administration cannot and will not account for this kind of money, $3 Billion, what else are they up to at the orders of Barack Hussein Obama?

There you go, economic collapse is looming and our government from the Congress to the Treasury, to the Federal Reserve to President Obama knows it and it is as if they want it to happen because no one is doing anything about it.
Today, millions of Americans belive the U.S is on verge of a major food collapse,that we are entering anoter Great Depression. Only a small percentage of th people is prepared for that before it happens.

Things you should do to get prepared for the coming food shortages, war, a terrorist attack, a deatly pandemic or a masive natural disaster :

Of course you can grow you on food, but that is going to take time. So you need to have enought food stored up to keep you alive until your plants can be harvested.

Learn how to distill and purify water.
Water is the most important item . Often pioneers had no choice but to drink water made by human and animal waste. Coffee made it taste better. They could either drink foul water or die of dehydration, which wasn’t much of a choice. They “cured” sickness and disease with peppermint, whisky and rum. Vinegar was also a medicinal tonic to help ease their health woes. What a life!
One in ten travelers died the journey. Clean water was hard to find and the pioneers often died of dehydration or the perils of bitter alkaline water (too high ph), parasites in water and disease borne mosquitoes.

3# Shelter  to survive for a long period of time ( what would you do if you and your family lost your home or you are forced to leave your home? Where would you go? )

4# Lighters or Matches (you’ll also need something to start a fire to cook the food, boil water and stay warm ).

5# Flashligtht, candles  ( Without power you quickly loose access to many essentials of modern life. Depending on the time of year and the duration, a power outage can mean the difference between life and death.)

6# Radio ( a radio can be an invaluable tool for keeping up with the news ) store up some batteries.

9# Store up Gold (for trade & barter.  This will still be worth the fare value in case the dollar collapses. But in the event of a collapse this  metal value could rise)

There is no doubt that we have been experiencing what I believe to be the calm before the storm. Right now we witnessing the elite quietly bugging out of sight, some have retired, some have gone missing, and we have even seen a rise in fatalities among them. Listen up America, it is past the time to be awake. When the elite start frantically stockpiling, it is time to move!

Please see the following video. This is proof positive that we are about to see real change in America. I wish it were different, I wish it were not true.

1 thought on “5 Signs That Prove We Are On The Brink Of A Complete Collapse – Get Prepared For The Coming Food Shortages And The End Of America As We Know IT!”