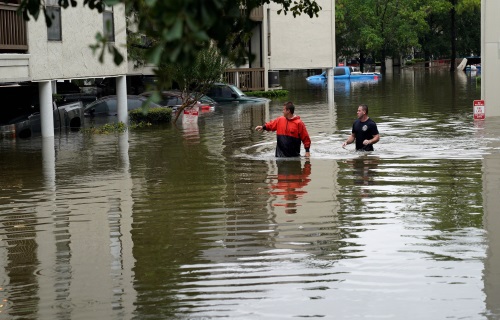 If a major emergency happened in the United States, do you have faith that the government would take care of you?  Amazingly, even after all of the examples to the contrary that we have seen in recent years, a solid majority of all Americans actually believe that the government will be there for them when things hit the fan.  According to a new survey conducted by the Adelphi University Center for Health Innovation, 55 percent of Americans believe that the authorities will come to their rescue when disaster strikes.  Sadly, most Americans still view the government as a “nanny state” that has both the capability and the willingness to take care of them from the cradle to the grave.

Most Americans still have faith that the government will come through for them when they need it the most.  But all we have to do is look back at what happened during the aftermath of Hurricane Katrina to realize what a crock of baloney that is.  Hurricane Katrina was a disaster that was limited to a relatively small geographic area, and yet we all saw how the response of the federal government was a complete and utter failure.  So what is going to happen someday if there is a nationwide disaster that stretches on for months or even years?  Do you really believe that the federal government will be there for you?

How is the federal government going to take care of more than 300 million Americans in the event of a major financial collapse?

How will you protect your savings and yourself in the event of an economic crisis? This just-released PDF guide Surviving and Thriving During an Economic Collapse will show you exactly how. Click here to download the PDF now.

How is the federal government going to rescue more than 300 million Americans if a killer pandemic sweeps the nation?

How is the federal government going to make sure that more than 300 million Americans are safe and secure if a cyber attack cripples our power grid or takes down the entire Internet?

How is the federal government going to get food and water to more than 300 million Americans if an EMP blast takes down most of the electronics in this country?

It would be easy to go on and on discussing various nationwide emergency scenarios.  All over the globe the number of earthquakes is increasing, and it would be easy to imagine an absolutely massive earthquake on the west coast or along the New Madrid fault in the middle of the country leaving tens of millions of Americans in need of basic assistance.

What would the federal government do in a situation like that?

Or how would the government handle a full-blown eruption of a major volcano in the Pacific northwest?

If the federal government could not even come close to handling Hurricane Katrina, then how in the world are they going to rescue us from something far worse?

Sadly, most Americans just roll along as if everything is going to be just fine.  Just check out some of the other numbers from the survey mentioned at the top of this article….

-44 percent of all Americans do not have first-aid kits in their homes.

-48 percent of all Americans do not have any emergency supplies stored up.

-53 percent of all Americans do not have a 3 day supply of nonperishable food and water in their homes.

Essentially, what we have got is about half the country that is completely and totally unprepared.

About half the nation is sitting back and relying on the government to make all of the preparations.

Yes, the government is definitely preparing, but those preparations are only going to go so far.

As referred to in paragraph (b) of FAR Clause 52.216-22, “Indefinite Quantity” of this contract, the guaranteed contract minimum is 21,000 packaged meals to include the base and option periods.  The contract ceiling amount shall not exceed17,500,000 packaged meals.

But even if FEMA ordered all 17.5 million meals, that simply is not going to go very far.  That would only be enough to provide about 5 percent of the population with a single meal.

So perhaps we should applaud FEMA for thinking ahead, but the truth is that there is simply no way that FEMA is going to be able to provide even the basic necessities for everyone if there is a very large regional or national disaster.

When a true disaster hits this country, the system is going to be concerned with saving and guarding and perpetuating itself.  The system is not really going to care about the survival of all of the “useless eaters” out there.

Recently, Barack Obama signed a series of executive orders that grant himextraordinary powers in the event of a national emergency.

With the stroke of a pen, Barack Obama could potentially take control of all food, all energy, all health resources, all transportation resources and all communication resources (including television, radio and the Internet).

Barack Obama insists that all of these executive orders are absolutely necessary.

Does he know something that we don’t?

In a recent editorial by Barack Obama that ran in the Wall Street Journal, Obama warned us of some of the potential consequences of a devastating cyber attack….

It doesn’t take much to imagine the consequences of a successful cyber attack. In a future conflict, an adversary unable to match our military supremacy on the battlefield might seek to exploit our computer vulnerabilities here at home. Taking down vital banking systems could trigger a financial crisis. The lack of clean water or functioning hospitals could spark a public health emergency. And as we’ve seen in past blackouts, the loss of electricity can bring businesses, cities and entire regions to a standstill.

So is there a reason why he is coming out with this now just a few months before the election?

That is a very good question.

In any event, the truth is that in the event of a major nationwide emergency the number one priority of the authorities will not be to take care of you.

In fact, the well being of you and your family will be very low on the list.

One of the top priorities will be to restore order, and authorities will use as much violence and brutality as it takes in order to do that.

We see examples of this around the nation every day.  For example, just check out the video posted below.  In the video, police officers in Anaheim, California can be seen firing “non-lethal” rounds at men, women and children while a police dog knocks over a baby carriage and attacks a woman who is holding a baby….

If that is how the authorities treat us in “good times”, then how would they treat us during a true emergency?

And right now things are falling apart all around us.  The economy continues to get worse in many ways, and the U.S. poverty rate is currently on pace to reach its highest level since the 1960s.

As I wrote about a few days ago, the Federal Reserve and the federal government did not prevent the last major global financial crisis, and they are not going to be able to prevent the next one from happening either.

If you want to make it through what is coming, it is up to you to get prepared.  Nobody else is going to do it for you.

When the next major natural disaster or economic crisis happens, it will be those that have prepared that will have hope.  Those that have not prepared will be freaking out and many of them will totally give in to despair or fear.  But those that have gotten ready for the storm ahead of time will be able to be at peace.

Our world is becoming more unstable with each passing day.  If you have blind faith that the government will always take care of you, then there is a very good chance that someday you will be bitterly disappointed.  But if you work really hard to prepare yourself and your family now, then you will have a much better chance of making it through what is rapidly approaching.