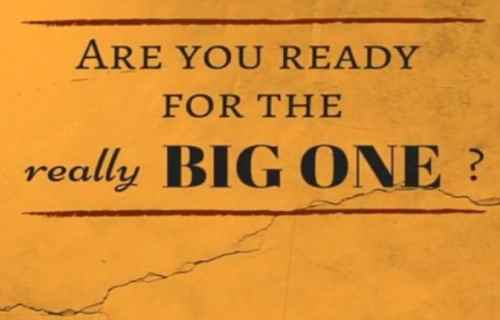 In order to reduce the risk of an earthquake and reduce and mitigate its effects, it is necessary to predict where and when a future, large earthquake may occur. For example, it would be important to know when such an earthquake will hit, where it will strike, and what the level of its destructiveness may be. Earthquake prediction at the present time is not an exact science, and forecasts of earthquake occurrences have not been very accurate. Presently predictions are given in statistical terms. For example, when a prediction is made that : here is a 90% chance that an earthquake will occur in the next 50 years”, it does not mean that this earthquake cannot happen tomorrow or it may not be delayed by 50 years. Thus, present predictions are not within a reasonable time frame that can be of usefulness to planners, policy makers, and those in government that deal with public safety.
To understand earthquake prediction, three different time frames have been assigned by scientists: long term, intermediate and short-term predictions. Long term prediction involves a time frame of a decade or more and can only be general and with very limited usefulness for public safety. Intermediate term prediction would fall into a time span of a few weeks to a few years, and again it would not be of great practical usefulness. It is the short-term prediction, that is specific information on the time and location of an earthquake given within days, weeks, months – not years – that would be useful for any kind of public safety and evacuation.
Several specific geophysical, geological, and chemical methods are presently used for earthquake prediction. To the list of geological and geophysical events and precursors we should add one more method that has been used with much success in China: that is the monitoring the behavior of animals before quakes.

It was in the early evening hours of February 4, 1975, when an earthquake of magnitude of 7.3 struck the densely populated town of Haicheng, in the Liaoning Province, in northeast China. As expected, because the magnitude was great and the area highly populated, damage to Haicheng and to neighboring towns was extensive. However, what was different about this earthquake is that very few lives were lost. The reason for the low death toll was that the occurrence of this earthquake had been successfully predicted.

RELATED : WARNINGS ISSUED after Sunday Earthquake in Kentucky — INTENSE FEAR of Massive “New Madrid Fault Zone” Quake Soon!
Earthquake Prediction Research
Presently what is called prediction is not really that. It is simply scientific research on understanding the workings of earthquakes. There is not sufficient historical data on which to base the number of hypotheses that have been proposed for earthquake predictions and, therefore, there is no way to judge the ultimate success or failure of such predictions. It would be difficult to explain to the public the difference between scientific research studies and actual predictions. There will be difficulty in understanding and it would be even more confusing.
For example, the present research efforts are directed toward the prediction of the numerous small earthquakes (magnitude 3 and 4) that occur frequently. By predicting the smaller earthquakes and by understanding the earthquake process that is taking place, it is believed that the long-term goal of predicting large, destructive earthquakes will be achieved. Thus researchers install dense nets of seismograph stations along active sections of active faults. Such networks are used to establish detailed studies of the pattern of seismic activity in respect to both the location of the earthquakes and the time of their occurrence. By so doing, researchers attempt to identify “gaps” or anomalies, in the pattern of seismic activity. Numerous types of instruments and methods are used for earthquake prediction. These instruments measure tilts into the ground’s surface, as well as changes in the magnetic field near active faults . Usually these changes precede the occurrence of some earthquakes.
In addition to the field investigations, laboratory and theoretical studies are also being carried out by governmental organizations and various universities in China and throughout the world. These investigations include studies of the mechanism of earthquake faulting of various rock types under conditions of high temperature and pressure, and detailed investigations of ground swelling, otherwise known as “dilatancy”, which precede an earthquake. Computer simulations of the conditions of the earth are being made as another means of obtaining patterns of earthquake processes in the hope of learning more about properties of the earth that control earthquakes.

In June 2015, John Casey issued a warning letter to FEMA, warning that the world would be heading into a “solar hibernation” period, a period that historically has been proven to cause upticks in catastrophic seismic and volcanic activity. Unfortunately, FEMA and the government are ignoring the multiple warnings sent from his institute.

“We believe the USA and the world, has now entered the most dangerous period for catastrophic earthquakes and volcanic eruptions in over two hundred years….It would be foolhardy to ignore in particular, the history of major earthquakes in the New Madrid Seismic Zone and the fact that at the bottom of every solar hibernation for the past 600 years, that area has seen devastating earthquakes ranging from M6.8 to M8.0.”

Why would FEMA and the government continually ignore repeated warnings that could save lives here in America? What earthquakes have a more likely chance of going off and how much time do we have left before the “big one”? All that and more in this CRUCIAL report they are attempting to suppress!

Devastating West Coast Megaquake Imminent Says USGS Scientist; “Beware The New And Full Moons”. Is “The Big One” imminent? Famed USGS scientist Jim Berkland, the man who predicted the Loma Prieta “World Series Earthquake,” has a terrifying warning for the West Coast of the US in the wake of massive earthquakes in Ecuador and Japan that have left hundreds dead, awakened volcanoes around the Pacific Ocean’s “Ring of Fire,” and kicked off earthquake swarms in Hawaii, Arizona, and Yellowstone National Park.

“Beware the new and full moons,” Berkland says in this exclusive interview. The “maverick geologist” says that 20 of the last 25 “megaquakes” have occurred on the dates of new and full moons, the result of “equinoctal tides,” extreme gravitational forces that cause solid earth to expand and contract much as ocean tides rise and fall.

Berkland says that he is particularly worried about the San Andreas Fault in the LA Basin and the Cascadia Subduction Zone along the coast of Oregon and Washington State, where a long overdue earthquake would undoubtedly be accompanied by a massive tsunami that could kill thousands and cause billions of dollars in property damage.

RUSSIA WARNS OF MEGA EARTHQUAKE COMING -Scientists Warn of Looming U.S. West Coast BIG ONE. In a day marked by the gloom of a growing death toll, at least one story of hope emerged Monday as search teams combed rubble for survivors days after a powerful earthquake shook Ecuador’s Pacific coast.
Rescuers pulled a person from the ruins of a hotel in the city of Portoviejo on Monday afternoon, security officials said.
In fact, seismologist Roger Bilham of the University of Colorado has made headlines all over the world by warning that “current conditions might trigger at least four earthquakes greater than 8.0 in magnitude”. If his projections are accurate, our planet could be on the precipice of a wave of natural disasters unlike anything that any of us have ever experienced before.

Since the beginning of 2016, south Asia has been hit by an unusually high number of large earthquakes, and this has scientists groping for an explanation.

A single magnitude 8.0 earthquake in a populated area would be a disaster of historic proportions.

If we were to see four of them like Roger Bilham is projecting, that would be a complete and utter nightmare.

It is important to keep in mind that a magnitude 8.0 earthquake would be many, many times larger than the twin earthquakes that hit Japan earlier today… Most Americans expect the next great earthquake in the United States to come on the west coast.
But what if it strikes right down the middle of the country instead? The New Madrid fault zone is six times larger than the San Andreas fault zone in California and it covers portions of Illinois, Indiana, Ohio, Missouri, Arkansas, Kentucky, Tennessee and Mississippi. Back in 1811 and 1812, a series of absolutely devastating earthquakes along the New Madrid fault zone opened very deep fissures in the ground, caused the Mississippi River to run backwards in some places, and were reportedly felt as far away as Washington D.C. and Boston. They were the strongest earthquakes ever recorded east of the Rocky Mountains, and scientists tell us that it is only a matter of time before we experience similar quakes. In fact, the U.S. Geological Survey has admitted that the New Madrid fault zone.

NASA: Earth’s Poles Are About To Flip – Worldwide Blackouts Coming! The Consequences Could Be Deadly

Russia Preparing To Destroy Large Asteroid Before Impact Event – Scientists Have Calculated That The Energy Released Would Equate To The Destructive Power of a Thermo-Nuclear Bomb.