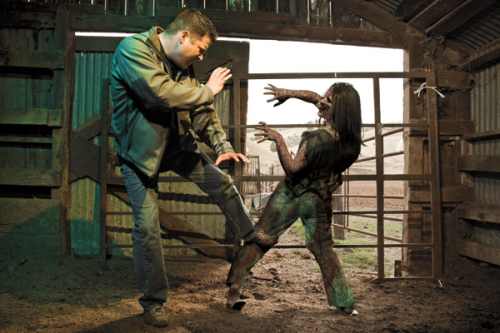 Since you’re reading this, you’ve probably considered how potentially dangerous a run-in with a zombie or, worse, a horde of zombies would be. You might assume that you could simply shoot an undead attacker in the head to send it back to the grave—permanently. Obviously, an armed response is the preferred course of action against an attacking zombie, but let’s face it, a gun can malfunction, run out of ammunition or be inaccessible when you need it most. There is also the possibility that the sound of gunfire would attract more zombies than you have bullets. Even a seemingly foolproof weapon, such as a knife or bludgeon, can be fumbled at the worst possible moment, leaving you with only your bare hands to fight off a hungry heathen.

To be truly prepared for a ghoulish encounter, you need to plan for the worst-case scenario: fighting the undead unarmed. When you’re relegated to facing a zombie empty-handed, adhering to these proven tactics will keep your cerebral cortex from becoming a tasty appetizer and, even more important, you from becoming the newest member of a cold and carnivorous zombie clan.

Stay Alert
Alertness is a cornerstone to any realistic self-defense program. Whether it’s recognizing a potential carjacker or detecting a zombie slinking in the shadows, being alert to the possibility of danger is the best way to avoid it. After all, the best fight is the one you’re not in, especially when it involves an undead opponent.

So how do you detect a zombie in time to take an alternate route? By paying attention to your surroundings. For instance, when approaching the corner of a building, distance yourself from the structure in order to get a bit more of a view around the corner with each step. (Tactical shooters will recognize this technique as “slicing the pie.”) For obvious reasons, the goal should always be to spot a potential threat before it spots you. Negotiating a corner in this manner keeps you from walking right into the outstretched arms of a bona fide member of the walking dead.

Remember, it’s hard to hear the low moaning of a distant zombie horde or the clumsy, trudging footsteps of a zombie just around the corner if you’re chatting or listening to music with ear buds securely attached. Don’t deprive yourself of your God-given senses. They may be all that stands between you and a terrifying close-quarter battle with one or more hungry zombies.

Escape or Arm Yourself
Escape is the ultimate goal in self-defense, regardless of whether your opponent is human or a mindless, groveling brain-eater. However, a human attacker may be armed or capable of outrunning you, so simply running away might not be feasible. Zombies, on the other hand, aren’t sophisticated enough to arm themselves with traditional weapons. (Of course, a zombie’s teeth and fingernails are no less lethal than a gun or a knife.) But because zombies are probably nowhere near as fast or agile as you, running away from a zombie pursuer is a sound tactic. The situation will dictate whether returning with a suitable weapon to put down the zombie is in order.

If you’re unable to outrun a zombie and you must fight, look for something that could be used as a weapon. Keep in mind that punching a zombie won’t produce the desired results. In fact, aside from being ineffective, punching a zombie is an excellent way to get bitten. Don’t do it. Your best bet is to find a weapon capable of putting the “dead” back into “the undead.” Of course, a stabbing instrument, such as a knife, screwdriver or pen, thrust through an eye socket can penetrate the brain and kill a zombie. A baseball bat, metal pipe or even a stomp to the head from a booted foot could crush a zombie’s skull, turning its brain to mush.

Use Agility and Speed to Your Advantage
Zombies aren’t known for their speed or agility. Nor do zombies possess superhuman strength or abilities. But they are fierce opponents because they are not deterred by pain or fatigue. These attributes enable a zombie to continue to attack until it is physiologically incapacitated, as would be the case if the zombie were beheaded or paralyzed. This is in stark contrast to living beings (including you) who will undoubtedly be affected by the pain and fatigue associated with close-quarter combat.

Don’t be lured into fighting the zombie’s fight. Standing toe-to-toe with an undead opponent is not smart, especially when you’re unarmed. Close-quarter combat with a zombie is challenging enough when you’re properly armed. Defeating a zombie in unarmed combat is possible, but it should definitely be considered a last resort.

When facing a zombie unarmed, exploit the advantages of your speed and agility. A relatively narrow stance is more conducive to movement than a deep, rooted stance and should therefore be employed against a slow-moving zombie. Being light on your feet and using angles to evade and counterattack will keep your undead assailant guessing as it plunges forward, step after plodding step.

Once you extract yourself from the immediate danger area, you may be tempted to stop and rest. Be alert, because though zombies don’t move quickly like a pack of hyenas, they are constantly moving toward their next meal. When you must rest, seek an elevated platform, preferably one that affords you a clear view of the approaching zombies. It has been said that most zombies are not dexterous enough to climb a ladder, but I wouldn’t bet my life on that assumption. 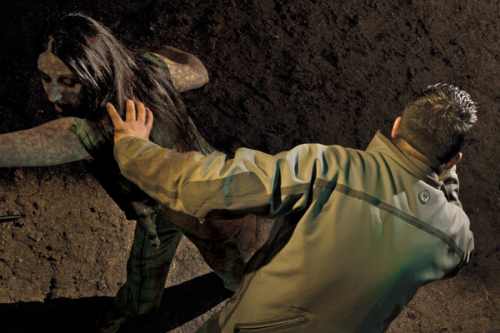 Use Low Kicks to Maintain Distance
Despite what you may have seen in his films, legendary martial artist Bruce Lee was a staunch advocate of kicking low when it came to real-world self-defense. While Lee might not have foreseen his kicks being used against zombies, they certainly fill the bill as your default zombie counter-attack. There are several advantages to employing low kicks against a zombie.

In all likelihood, your legs will be significantly longer than your zombie attacker’s arms, so kicking enables you to cause damage while maintaining a relatively safe distance from the business end (teeth) of the zombie. Your legs are also much stronger than your arms, so a kick is capable of generating a great deal more power than a punch. When this force is directed at a decaying zombie’s knee, you can significantly impede its ability to chase you.

A powerful kick to the front or side of a zombie’s knee is likely to cause considerable damage. The severity of damage will vary depending on the amount of force generated in the kick, the type of footwear worn by the kicker and the extent to which the zombie’s leg has deteriorated through decomposition. Stomping the back of the knee, while not as likely to severely injure, is a good way to take an attacking zombie down a notch. Remember, zombies are undead, not superhuman. A powerful kick to its knee could very well render one immobile.

Utilize Counter-grappling Techniques
When engaged in hand-to-hand combat with a zombie, one thing is certain: You don’t have to worry about being punched or kicked. Zombies are no longer clever or coordinated enough to attack this way. When facing a zombie, it’s all about counter-grappling and bite defense. The only weapons that need concern you are its teeth and nails. If you can negate these natural zombie attributes, you’ll be well on your way to escaping.

A zombie that grabs hold presents an imminent deadly threat. There is no time for deliberation when in the clutches of an undead walker who has chosen you from the menu. Anytime an attacker (human or otherwise) grabs you, the faster you respond, the better your odds are of escaping. Any delay enables your adversary to secure its grip, making it much more difficult for you to break free.

A common zombie tactic is to grab its intended human meal by the arm and pull him in close to bite or pull him to the ground to be devoured. When you feel those cold, undead hands grab your arm, immediately widen your stance to maintain balance. If you don’t lower your center of gravity, you may very well become “ground meat.”

Once you’ve established your balance, move your arm in a circular motion (clockwise for your right hand and counterclockwise for your left hand) to compromise the ghoul’s grip. This places you in a position of relative safety, since you are far from the teeth and the zombie’s own arm hinders its ability to bite you. Striking the zombie’s elbow should enable you to break the hold completely. If not, maintain your position on the outside of the creature’s arm and strike the elbow repeatedly until you’re able to break either the hold or the arm. If this is ineffective, direct a low kick to the back of the zombie’s nearest knee. This should drive the zombie to its knees, breaking its grip and facilitating your escape.

Disarm a Zombie by Grabbing Its Throat
When a zombie has forced you against a wall and closes the distance to sink its rotting teeth into your flesh, thrust a hand under the zombie’s chin and grab its throat. This will afford you a degree of control over the zombie’s head and teeth and keep your hand and arm relatively safe from being bitten. (This tactic is comparable to first securing a gun and controlling the direction of the muzzle before attempting to counterstrike or disarm the gunman.)

Once you’ve gained temporary control of the zombie’s primary weapon (its teeth), swing your forearm across your body to strike the zombie’s arm at or above the elbow to dislodge and clear its arms from the path of escape you are creating. Simultaneously, rotate your upper body in the same direction as your strike to peel yourself off the wall and send the zombie heading in the opposite direction. When executed properly, this technique will create a sufficient opening for you to run away from your confused attacker.

Conclusion
Do not assume your standard self-defense techniques are sufficient for defeating a ghoulish creature intent on wolfing your brain. Defending yourself from an attacking zombie is a unique endeavor, requiring a targeted approach.

At the first indication of a zombie, seek an escape route. If a zombie somehow closes in, arm yourself. If there are no viable weapons within reach, take out the zombie’s knee to hinder its mobility. If you’re clinched with a zombie, break the hold and create distance.

As a last resort, grab the zombie’s throat and hold on for dear life. Look for a way to improve your position and escape. Keep in mind that the most critical factors—regardless of whether the predator you face is human or zombie—are your willingness to do whatever it takes to win the encounter and your commitment to never give up.

Protecting Yourself from the “Knockout Game”

Shock FedGov Court Ruling: Police Can Kick In Your Door and Seize Guns Without Warrant or Charges