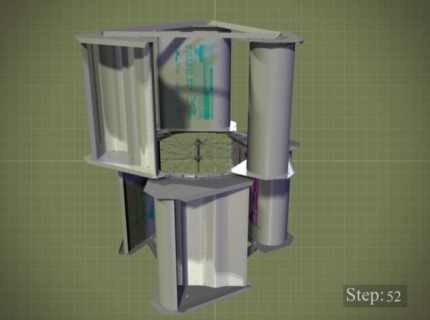 Getting started with home wind energy projects can set you back a pretty penny if you buy a finished product, but if you’re a little bit handy and don’t mind scrounging for materials and getting creative in the garage or backyard, you can try your hand at building one of these DIY wind turbines for about $30 in materials. After all, it is #iheartrenewables week!

We’ve previously covered Daniel Connell’s open source concentrated solar collector plans, but now he’s back with another great DIY renewable energy project, a vertical axis wind turbine based on the Lenz2 lift+drag design. Connell’s design calls for using aluminum lithographic offset printing plates to catch the wind, which he says can be obtained cheaply (or possibly even free) from an offset printing company, and a variety of hardware and a bicycle wheel.

“The turbine uses the ~40% mechanically efficient Lenz2 lift+drag design. It is made entirely from scrap materials except for the bolts and pop rivets, and should cost about $15-$30 for the three vane version, which can be made by one person in six hours without much effort.

Other than basic tools, including a hand drill, you’ll need to buy or borrow a pop riveter and some assorted hardware (bolts, nuts, and washers) to construct this device. According to Connell’s notes, this DIY wind turbine, which can be built in either a three vane or six vane version, has successfully survived sustained winds of 80 km/h (three vane) and up to 105 km/h for the six vane version.

Here’s a little clip of the vertical axis wind turbine being challenged by strong winds:

In order to harvest the energy from this wind turbine, it’s necessary to add an alternator to the rotor, as well as a method of storing the electricity, but it could also be used simply for the mechanical rotation, such as to pump water or spin a flywheel for other applications.

While there are a number of variables that can affect the output of this DIY wind turbine, including the efficiency of the alternator used (and obviously the speed of the wind where it’s located), according to Connell, using a “50% efficient car alternator (the simplest and cheapest option) should produce 158 watts of electricity in a 50 km/h wind, and 649 watts at 80 km/h” with this design.

[Update: In an email conversation with Connell, he stated that “a six vane version with an efficient alternator should produce at least 135 watts of electricity in a 30 km/h wind, and 1.05 kilowatts at 60 km/h.”]

This homebrewed wind turbine isn’t necessarily going to be powering your home (although a series of these could potentially be used to generate enough electricity to charge a battery bank for modest home use), it might be a great hands-on school project or homeschool activity about wind energy.