Imminent: ‘Only a matter of time’ until entire electric grid destroyed by natural or man-made event…
Billionaire hedge fund manager Paul Singer is warning investors – and more broadly, lawmakers and leaders – about the potential destructive power of an electromagnetic pulse, or EMP, which could be triggered by solar events or artificially, via blasts in the atmosphere.

According to Singer, research shows that no other incident, including a nuclear bomb, has the potential for such wide-scale devastation, coupled with the relative likelihood of occurring. While a nuke would primarily impact on the location of a such (such a city), an EMP could occur globally or across large-scale regions, wreaking havoc on the entire electric grid and devices.

“(A natural EMP event) today would cause a massive disruption to the electric grid, possibly shutting it down entirely for months or longer, with unimaginable consequences,” Singer wrote. “Only two years ago, the sun let loose with a Carrington-magnitude burst, but the position of the earth at the time prevented the burst from hitting it. The chances of additional events of such magnitude may be far greater than most people think.” “It would not cause any blast or radiation damage, but such an attack would have consequences even more catastrophic than a severe solar storm. It could not only bring down the grid, but also lay down a very intense, very fast pulse across the continent, damaging or destroying electronic switches, devices, computers and transformers across America,” the letter said.

Members of Congress and other officials based in Washington have previously conferred on the threats rendered by an EMP, with Rep. Yvette Clarke (D-NY) – a senior figure in the House Homeland Security Committee – warning that “The Likelihood of a severe geo-magnetic event capable of crippling our electric grid is 100%.“

The Center for Security Policy, along with other officials, have similarly warned:

And experts forecast if such an attack were a success, it effectively could throw the U.S. back into an age of agriculture.

“Within a year of that attack, nine out of 10 Americans would be dead, because we can’t support a population of the present size in urban centers and the like without electricity,” said Frank Gaffney, president of the Center for Security Policy.

Government agencies, such as NASA and Homeland Security, have taken some preliminary steps towards preparing for an EMP attack – regardless of the potential for natural or man made causes – but the public at large remains cripplingly unaware of the dangers present to modern life, and its reliance on all things electronic, digital and, thus, transient.

We reported in August 2017 on then Homeland Security chief Janet Napolitano’s claim that a collapse of the grid was an imminent ‘if not when’ scenario… unsettling, whatever one’s read on the looming government agendas at work. 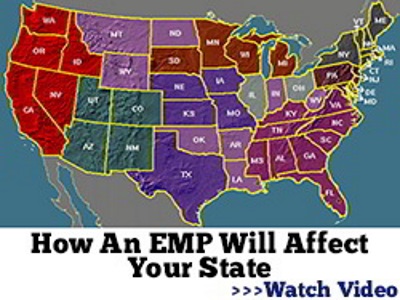 What You Can Do: Preparing for the Worst

The prolific writer Michael Snyder, warning that an impending EMP event that could bring down the entire grid is “only a matter of time,” outlined some steps that individuals can take to prepare, protect their devices, and plan for adjustments to life off the grid, which could take months or even years to repair in some areas.

With this in mind, hedge your preparation for emergencies with as much physical currency, food, fuel, candles, water as you can reasonably store/save up, as one would for other emergencies.

Also, with some planning, you can create Faraday cages and bags to shield electronics (perhaps backup units and parts) from damage. You can convert such common objects as metal trash cans into safe storage areas, but it must be done in advance.

See the warning from nationally recognized experts on the threats to America’s power-grid from an EMP attack, terrorist attack or cyber Pearl Harbor. Learn how you and your family can make common sense preparations.

Here’s just one video source with some advice:

2015 Warning EMP Attack on America – Life After an EMP -90% of all Americans will die within 18 months after an EMP event.