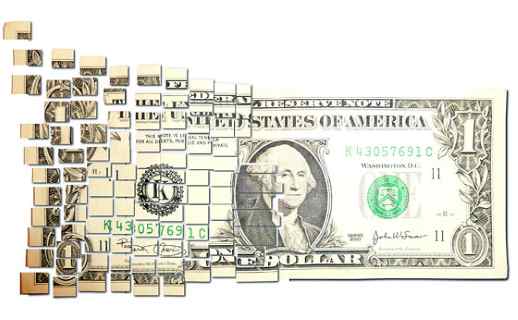 The Dollar Is Doomed

What will be the trigger for a major upturn in inflation – leading to a systemic downfall or reset?

Some see the end approaching, and even say the result will be a broad loss of life…

Except for the American ‘sheeple’, the rest of the world already knows the dollar is doomed:

Seeing the stock market ‘growth’ being largely moved away from fundamentals (and reality) having become grossly distorted through various methods of support and rigging.

The fact that the govt is not reporting ‘the numbers’ (pick any) accurately.

The supposed strength of the dollar being distorted by manipulation and overstatement of economic growth (e.g. the govt now counts future R&D as part of GDP).

The fact that (real) inflation numbers are highly distorted and understated through changes in methodology of reporting.

The fact that the U.S. national debt has crossed over $18 Trillion with no end in sight (except for ‘the’ end).

The fact that there’s less need (and faith) for the dollar beyond America’s shores.

The fact that other nations (Russia, China, ..) have moved outside the dollar and are trading-dealing with other currencies (and gold).
“It is a debt based economic model. It all goes back to the premise that it can’t stop. This whole mechanism of borrowing cash into existence is so dastardly and so pervasive . . . once this comes down . . . once this debt bubble bursts . . . we are going to see a loss of life.” says Gregory Mannarino (market trader).
The (debt based) system has tapped out the middle class. Businesses have already trimmed out all the fat in production and manufacturing while many sustain only razor thin margins.

The central bankers are desperate. They NEED more debt to keep it all going. That’s the only way it ‘works’ (for them).

They are desperately afraid of deflation (it contracts their system) and will do anything (things unforeseen?) to control a rate of inflation without losing that control. Problem is – they have exhausted SO MANY of their tricks already since the 2008 crash (smoke and mirrors), one wonders what’s left in their bag of tricks. There are world events taking place right now which will greatly hamper their ability to continue their world export of currency inflation and the ‘need’ for the dollar – not to mention it’s eroding faith thereof. Seems like the end game is getting closer. The musical chair players are reaching for chairs…

On the U.S. dollar, Mannarino says,

The U.S. dollar is in a terminal phase. I don’t care what dollar’s strength is recently with regard to other currencies out there. We have countries, specifically China and specifically Russia, who are betting against the U.S. dollar. How do I know they are doing this? They are acquiring huge amounts of gold with these suppressed prices. This is what everybody needs to do as well. Bet against the debt and become your own central bank.

You do not need to be a rocket scientist to figure out how this is going to play out. In my book, “The Politics of Money,” I say in the end stage, we would see deflation first and then massive inflation, and that plays exactly into what’s going on right now. The U.S. dollar is on borrowed time, and I think there is going to be a terrible price to pay. Watch for hyperinflation because it is a very real possibility.

-from an interview on usawatchdog.com with Greg Hunter

NONE of the problems of 2008 have been solved.

EVERYTHING has been pushed into the future since then. The banking system (and the dollar) are in trouble. Something, one day, will trigger the demise.

The question is, are you ready?
You might ask, “What might happen and how should I prepare for a collapse of the system or a ‘reset’ of sorts”?

Generally, I would suggest to prepare for a time when your dollar will one day purchase much less (than it already does) while at the same time you are not earning any more. A currency reset (for example) could devalue your earning power by 30 to 50%, while even a much smaller reset will collapse the already stacked house of cards. The next crash will probably be ‘the’ crash which brings it all down.

Imagine a time when many or most people are not able to keep their heads above water (economically speaking). I mean a time that’s even much worse than today. Hopes will be dashed. Retirement funds will be crushed. Desperation will set in. People will revolt. Govt will clamp down. Social chaos will become the normal. It will be a dangerous time.

Being as self-sufficient as possible will help shield you from reliance upon the current system. While it may be very difficult to set yourself up this way in entirety, whatever you can do today will not only help you today but it will provide a bit of insulation between you and the problems of the future.

Think about your basic everyday needs and the things you can do to minimize your dependence upon external sources of these needs (or whether you really need it at all). Figure out your financials, your food, shelter, energy, transportation, and security situation. If you have ‘extra’ money, where is your money? Are you diversified into areas which may actually benefit from a dollar collapse? Can you produce ‘any’ of your own food? Do you have ‘any’ stored up? Do you own your home? Could your home be taken away from you? If you’re a renter, do you have enough cushion to continue to pay the rent? Your energy bills? Any sources of alternative energy? Do you have a car payment or do you own it outright? What about protection of self and property?

There are many more questions to ask yourself. One good way to go about it is to simply imagine such a time and such a scenario. From there, you will be led towards solutions through your own critical thinking. Then ‘act’. Do something about it. Start with small steps if that’s how you walk. For others, they may choose to run – for the time may be short…