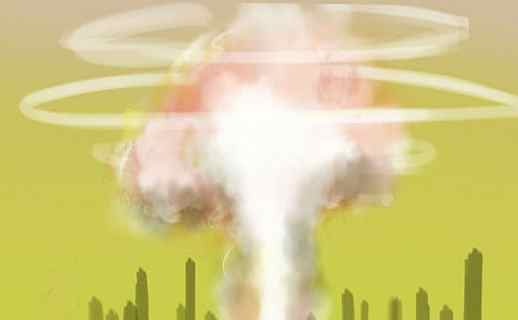 The immediate psychological effects of a thermonuclear explosion – a surface burst of nuclear weapons that suck millions of tons of pulverized and radioactive earth into the air – will be outright terror.
Stunned terror, confusion, and panic – primarily because it will be an event that is so entirely outside the realm of normal thinking – it will ‘not compute’.

RELATED : Nuclear War Is No Longer Just a War of Words

Those who grew up during the height of the cold war with the USSR have a better understanding about what could happen, and they had prepared (and drilled) for nuclear war. It was part of their realm of possibilities. While that generation for the most part is still alive today, the threat of thermonuclear war is not in any way a part of the thought process of generations that have followed. At all…

A nuclear attack will be completely and entirely unexpected by nearly everyone. Even with the wars being fought today, no one, except for military planners, is attributing barely any risk to a nuclear detonation.

The problem with that thinking is the assumption that the powers-that-be are sane and logical minded human beings of reason and sensibility. Many of us on the other hand, know our history and also know that there are present day ‘questionable’ leaders and those in positions of world power and influence who may not necessarily place the same value in human life as you or I.
——————–
Suddenly, a brilliant and blinding flash of light…

Some people will think the end of the world is upon them following the blinding flash of light – seen many 10’s of miles from ground zero. The billowing red and orange fireball of boiling fire, towering into the sky, will trigger panic.

There will be no way to know, at first, if there are more to come, or if other cities have been blasted. Chances are, there will be another wave.

The terror will paralyze most, who will do the wrong things or do nothing at all. There will be those who will suffer heart-attacks due to the fear and panic of the horrific event. Chaos.

The thing is, a nuclear attack is survivable, so long as you are not immediately within the blast zone of instant death. Certainly your life will be changed forever, but you will stand a chance to survive. It will involve not panicking, particularly if you have prepared yourself ahead of time; and it will entail implementing a survival plan – a way of life which will give you a fighting chance to make it in a modern world which has been torn up and hurled into chaos.

——————–
What will you do immediately after the nuclear explosion? The very first warning sign may be the blast itself. Under no circumstances should you look directly at the fireball, or suffer probable temporary (or permanent) blindness.

Your greatest immediate need will be shelter. Seek shelter immediately. If you are several miles out and survived the initial blast, you may have 30 seconds until the shock wave hits.

Even at 5 miles out, you will suffer third degree thermal-burns. At 20 miles the heat can still burn the skin off your body. The wind from the shock wave will peak at around 600 mph and will level anything or anybody caught in the open.

The best bet for survival within blast zones and their perimeters will be underground, with dirt/earth between you and the fallout/radiation.

If the detonation was a surface blast or the fireball hits the earth, large amounts of fallout occurs. The dust and debris kicked into the atmosphere rains down, bringing with it dangerous amounts of radiation. The fallout may rain down as contaminated black soot known as “black rain,” which is very fatal and may be of extreme temperature. Fallout will contaminate anything it touches.

Plan on staying in your shelter for a minimum of 200 hours (8-9 days). Under no circumstances leave the shelter in the first forty-eight hours.

A primary aspect to survival will be to keep any radioactive dust/debris/fallout from contacting your body – or breathing it in, if you are within range of the fallout cloud.

After the initial shelter-in-place period, you will need to leave the area completely. The ground will be covered with radioactive dust/debris. Leave the area when “the dust has settled” so to speak. Then enact your bug-out plan.

RELATED : Aftermath: Bugging Out After An EMP Attack: “The World Around Him Had Suddenly Fallen Apart”

If you are outside the range of nuclear fallout, then your primary concerns will be any immediate follow-on attack versus the proximity to where you are located. If that is not an issue, then you will be entering the phase of SHTF, where life as you know will be changed forever. Your survival will now depend on your preparations for a major collapse, and all that goes along with it…

The psychological preparations for nuclear war involve the acceptance that it could actually happen – shedding your normalcy bias, and then the planning for such an event (which will overlap with other preparations if you are a preparedness-minded person).

The scope here is not to tell you how to survive nuclear war, but to get you to start thinking about it – the first step to taking action…