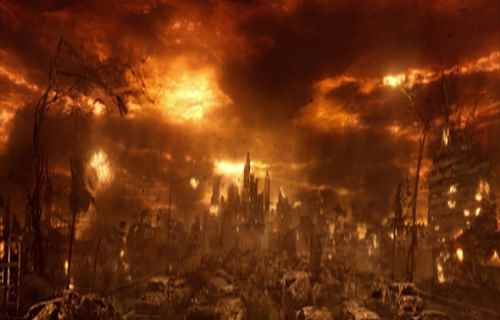 If you listen to Muslims… and Christians, the Apocalypse is approaching… again.

For the religious apocalyptic ending of everything to happen, there must be other things happening, which are connected with each other.

For the none believers, it’s an amazing story for a disaster movie in Hollywood.

Today, in the year 2016, when you talk to some semi religious Muslims, and its the majority of the Muslims, they truly believe that the Apocalypse is fast approaching. When exactly?

The Jews believe that the Messiah is coming, but when exactly, that’s not clear. Jewish schoolers have several possible years when the Messiah appears: the year 2024 or the year 64,686.

The Apocalypse is described in the holy books from Christianity and Islam and their stories are similar. The Jewish version of the Apocalypse is not so dramatic, but at the end its similar.

To come back to the year 2015. The ISIS truly believes in the fast approaching Apocalypse and they do anything do make that happen.
The Iranians think the same with the Shi’ite version of the Islam. The other Muslims in the Middle East believe that the Apocalypse is likely approaching.

I’m sidetracked again. Back to the three main religions again. They all have the believe and expectancy of the fast approaching Apocalypse. But what has that to do with the year 2015? Nothing, except it’s a very important aspect for the Muslims and one of the big reasons of the mess in the Middle East and surroundings.

For those of us, who are not believers in one or all of the three religions, you can observe the history of what happened when people believe that the Apocalypse approaches. You know what happened? Right, nothing.

After almost each heavy storm, tsunami, tornado and earthquake through history, people think that the Apocalypse is on them. Through history, this happened thousands of times. Many Christians and Muslims truly believed in that and many killed themselves, unable to face their final judgement.

Many of those believers are more then willingly to give their lives for their faith, Christians or Muslims. And that’s so dangerous. Those fanatics do anything what they believe is their religious believe and duty. This behavior was the same as 2,000 years ago, 1,400 years ago and now in the year 2016.

Death, death and more death. There seems to be no end

Now we see what happened in Tikrit, Iraq. There are thousand ISIS fighters in the city, previously the hometown of Sadam. The city is attacked by 30,000 mainly Shi’ite Iranian militants with tanks, artillery, mortars and the whole thing, and they got stopped. ISIS has done it again. In order to conquer the city, they beg the US army to bomb the city. Read here to reduce the city to rumble with anyone in it. After the US is finished with their bombing, they will be blamed for the loss of civilian lives.

This shows that Arab armies have no chance against ISIS. Western armies though are able to wipe out the ISIS, but they must stay there, constantly killing the stream of new appearing Islamic extremists.

For the Islamic extremists, the Apocalypse is a reality. You can laugh about it, believe with them, or whatever you want, but the fact remains that those Islamic extremists are fanatics, fighting viciously against anyone, murdering anyone who is surrounding them.(source)

Does the Government know they will never have to pay the bill? Is global catastrophe make all debt irrelevant? Banking exec thinks there is something coming.

RELATED : Nostradamus : Why The World – War 3 Will certainly Be on October

Why Are So Many Among The Elite Building Luxury Bunkers In Preparation For An Imminent ‘Apocalypse’?