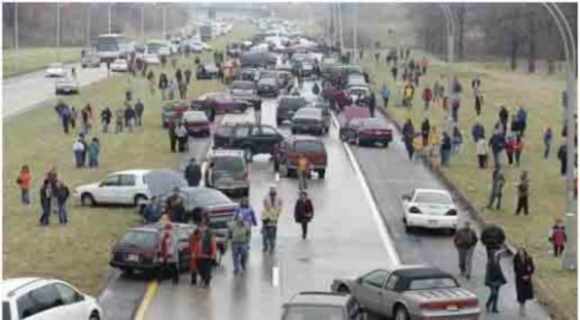 Electronic Doomsday for the U.S.? An EMP Attack  Would Leave The Country With no Electricity, no Communications, no Transportation, no Fuel, no Food, And no Running Water

The danger to the United States is particularly consequential due to the close military cooperation of North Korea and Iran. Their combined capabilities, as demonstrated recently, could very well signal a future nuclear attack of the electromagnetic pulse type, for which the U.S., at the moment, is totally unprepared.

The threat to the United States from an electromagnetic pulse (EMP) attack — the high-altitude detonation of a nuclear weapon over the United States — is so potentially catastrophic that both the 2004 and 2008 reports of the Congressional EMP Commission said so openly — probably in the hope that the public warning would spur the nation and the Department of Defense to action.
The recent North Korean nuclear and the Iranian ballistic missile tests are serious deadly threats to the United States. North Korea’s latest bomb test is being widely dismissed by “experts” because the apparent yield is around 10 kilotons or less – which just so happens to be exactly the right amount for an electromagnetic pulse (EMP) explosion.

RELATED : Why Should You Build Your Own Power Generator?
Emp attack how it would affect us. electric grid for a protracted period of months or years ” warned Peter Pry executive director of the emp task force a bipartisan congressional commission. congressman warns emp attack to wipe out 90% of U.S. population.Projection of iranian emp attack on america.

An EMP attack on the U.S. would leave the country with no electricity, no communications, no transportation, no fuel, no food, and no running water.

With no vehicles or trucks on the road — due to the majority of vehicles’ fried components as a result of the EMP — there will be no new deliveries of food to restock store shelves as store shelves empty when there’s a mad dash for groceries across the land.

If that’s not bad enough, all foods requiring refrigeration will start going bad within just a few hours. A fully stocked refrigerator and freezer will have to be eaten in a very short time frame (frozen meats could be thawed and then smoked using primitive methods for long term food storage, so not all is lost for people who have taken the time to learn how to smoke and preserve meat — we’ve covered this in another article).

If a major catastrophic event ever hits America , will you be able to sustain your family in the aftermath? The Lost Ways Book teaches you how you can survive in the worst-case scenario with the minimum resources available.It comes as a step-by-step guide accompanied by pictures and teaches you how to use basic ingredients to make super-food for your loved ones.

“Our increasing dependence on advanced electronics systems results in the potential for an increased EMP vulnerability… and if unaddressed makes EMP employment by an adversary an attractive asymmetric option.” — EMP Commission.

The recent military writings and exercises of potential adversaries would combine EMP with cyber-attacks, sabotage, and kinetic attacks against the national electric grid and other critical infrastructures.

While the Pentagon is moving to shield its global air defense command from being knocked out by an electromagnetic pulse (EMP) attack, the Obama administration has failed to act on urgent recommendations to protect the country’s civilian electronic infrastructure from a similar catastrophe, they write.

“An EMP strike, most likely from the detonation of a nuclear weapon in space, would destroy unprotected military and civilian electronics nationwide, blacking out the electric grid and other critical infrastructure for months or years,” Cooper and Pry write.

“The staggering human cost of such a catastrophic attack is not difficult to imagine.”

The likeliest source of such an attack would be North Korea or Iran, according to Cooper, former director of the Strategic Defense Initiative, launched by the late President Ronald Reagan, and Pry, executive director of the EMP Task Force on National and Homeland Security and a veteran of the Central Intelligence Agency.

The EMP Commission also warned that the Department of Defense has failed to maintain adequate EMP protection for U.S. military forces since the end of the Cold War:

“The end of the Cold War relaxed the discipline for achieving EMP survivability within the Department of Defense, and gave rise to the perception that an erosion of EMP survivability of military forces was an acceptable risk. EMP simulation and test facilities have been mothballed or dismantled, and research concerning EMP phenomena, hardening design, testing, and maintenance has been substantially decreased. However, the emerging threat environment, characterized by a wide spectrum of actors that include near-peers, established nuclear powers, rogue nations, sub-national groups, and terrorist organizations that either now have access to nuclear weapons and ballistic missiles or may have such access over the next 15 years have combined to place the risk of EMP attack and adverse consequences on the US to a level that is not acceptable.”

Many other Americans will be in trouble also — especially those due for refills of important medication they rely on to live; this includes diabetics (which there are a lot of nowadays) who have to store their insulin medication under refrigeration as it goes bad quickly when not kept at a constant, cool temperature. Many diabetics will die as a result of the EMP.

– Darkest Days How to Survive an EMP Attack to The Grid A knowledgable source said that the text book discusses an EMP attack on America in 20 different places gettin home- post emp attack.-