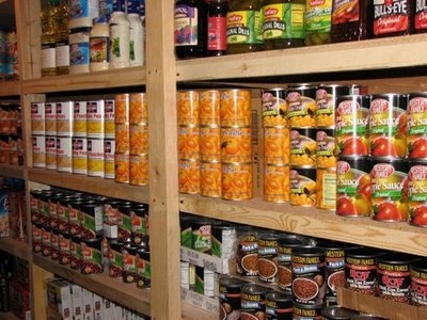 Does being a prepper show a lack of faith in God?  Should good Christians reject prepping altogether?  Yesterday, someone actually accused me of being “anti-faith” because I am encouraging people to prepare for the coming economic collapse.  This person believes that if I had faith, then I would make “no provision” for what is ahead and simply trust “in God’s providence alone”.  So is that person right?  Is it really “anti-faith” to prepare for the coming economic collapse?  I spent quite a bit of time thinking about these questions today.

Those that visit my site on a regular basis know that I am a Christian and I am very open about that fact.  I am someone that places a very high value on faith.  The Scriptures tell us to “trust in the Lord with all your heart and lean not on your own understanding”.  Without God, none of us has any hope.  In fact, without God I would probably be dead by now.

But faith is not about sitting on your couch and waiting for God to do everything for you.  Rather, faith is about taking action on what God has directed you to do.

What I don’t understand is why any of these Christians that are 100% against prepping continue to go to work.  If we are to make “no provision” for ourselves and simply trust “in God’s providence alone”, then why do they need to earn a paycheck?  Why can’t they just sit home and wait for God to fill up their bank accounts?

Yes, God can do mind blowing supernatural things that require absolutely no participation on our part.  I know, because it has happened to me.  But the vast majority of the time, God works with us.  He requires us to take steps of faith and obedience, and in the process He leads us, He guides us, He blesses us and He opens doors for us.

The story of Noah is a perfect example of this.  He was perhaps the very first “prepper”.  God could have kept Noah and his family safe from the flood by transporting them to some sort of very comfortable “heavenly waiting area” and brought them back when everything was dry, but He didn’t do that.  Instead, God warned Noah about what was coming and ordered him to build a boat.

So did Noah just sit back and wait for God to do everything for Him?  No, he exercised his faith by taking action.  He believed the warning and he built a giant boat.  In Hebrews 11:7, Noah is commended for his radical faith which produced radical action…

By faith Noah, when warned about things not yet seen, in holy fear built an ark to save his family. By his faith he condemned the world and became heir of the righteousness that is in keeping with faith.

Faith almost always involves action.  God wants to see if we are going to believe Him and do what He has instructed us to do.

And the amount of faith that Noah exhibited was staggering.  The boat that he and his family built was approximately the size of a World War II aircraft carrier.  It took a very, very long time to build that boat and collect all of the food and supplies for his family and for all of the animals.

And surely Noah must have gotten very tired of all of the mocking as he warned everyone else about what was coming for decades.

But in the end, Noah’s prepping paid off.  He and his family were saved, and everyone else drowned.

Unfortunately, there are lots of Christians out there today that are 100% against preparing for what is ahead, even though they will admit that an economic collapse is coming.

The individual that accused me of being “anti-faith” is an example of this.  The following is an excerpt from the message that this person wrote to me…

Now, although I agree with you about the things you write about the corruption of the financial system, and that there will be a collapse, yet I do not agree with you in promoting people to be self-sufficient contrary to the Lord’s teaching. If you truly have God then no provision needs to be made at all for yourself, just trust in God’s providence alone.

This individual agrees that a collapse is coming, but insists that we should doabsolutely nothing to prepare for it.

Is that really what God would have us do?

In Genesis 41, God revealed to Joseph that there would be seven good years followed by seven lean years.  So did Joseph party for seven years and “trust in God’s providence alone” for the lean years?

No, Joseph engaged in an “emergency food storage project” unlike anything that the world had ever seen up until that point.  By heeding God’s warning and taking action, he ended up saving the nation of Egypt and his entire family.

Some people believe that preparing for hard times means that you are “fearful”, but I don’t see it that way at all.

The people that stick their heads in the sand right now are going to get blindsided by what is coming.  Many of them will totally give in to despair when they realize that they have lost everything.

I think that we would all benefit greatly by taking advantage of the wisdom found in Proverbs 6:6-11…

Go to the ant, you sluggard; consider its ways and be wise! It has no commander, no overseer or ruler, yet it stores its provisions in summer and gathers its food at harvest.

How long will you lie there, you sluggard? When will you get up from your sleep? A little sleep, a little slumber, a little folding of the hands to rest— and poverty will come on you like a thief and scarcity like an armed man.

You don’t prepare when the storm hits.  Rather, you prepare while the storm is still off in the distance.

Throughout the Scriptures, those that “prepare” are commended.

For example, just check out the following parable of Jesus that we find in Matthew 25…

“At that time the kingdom of heaven will be like ten virgins who took their lamps and went out to meet the bridegroom. Five of them were foolish and five were wise. The foolish ones took their lamps but did not take any oil with them. The wise ones, however, took oil in jars along with their lamps. The bridegroom was a long time in coming, and they all became drowsy and fell asleep.

“At midnight the cry rang out: ‘Here’s the bridegroom! Come out to meet him!’

“Then all the virgins woke up and trimmed their lamps. 8 The foolish ones said to the wise, ‘Give us some of your oil; our lamps are going out.’

“‘No,’ they replied, ‘there may not be enough for both us and you. Instead, go to those who sell oil and buy some for yourselves.’

“But while they were on their way to buy the oil, the bridegroom arrived. The virgins who were ready went in with him to the wedding banquet. And the door was shut.

“Later the others also came. ‘Lord, Lord,’ they said, ‘open the door for us!’

“Therefore keep watch, because you do not know the day or the hour.

Do we want to be like the wise virgins or the foolish virgins?

Yes, we never want to become obsessed with material things.  We need to keep our priorities in order and focus on the things that are really important.

But that doesn’t mean that we can all just sit on our couches, eat chips, and wait for God to do everything for us.

In my opinion, we have been warned about the coming economic collapse in a multitude of different ways.  At this point, what is coming should be glaringly obvious to anyone with half a brain.

I am trying to do my best to warn people about what is coming from my little spot on the wall.  In the Scriptures, those that are aware that a threat is coming are responsible for warning others about it.  The following is a short excerpt from Ezekiel 33…

Are you a watchman on the wall?

Are you blowing your trumpet?

That is one of the reasons why I work so hard on my articles.  I hope that people will use them as a tool to help warn others about what is coming. Click here for more info.

My goal is never to create fear.  Rather, my goal is to wake people up and give them hope.

Those that heed the warnings and diligently prepare will have a good chance of weathering the coming storm.(source)

I honestly don’t know what those that have made absolutely no preparations are going to do.

RELATED : Living Off the Land Are You Ready? How to Live Off The Land if a Complete Breakdown of Society Ever Occurs

RELATED : The Top 17 Old West Pioneer Recipes You May Need

RELATED : What Will Happen First, An Economic Collapse or World War 3? And How to Preparing for This

Tips That Will Help You Prepare For The Coming Economic Depression

19 thoughts on “Is It “Anti-Faith” To Prepare For The Coming Economic Collapse?”