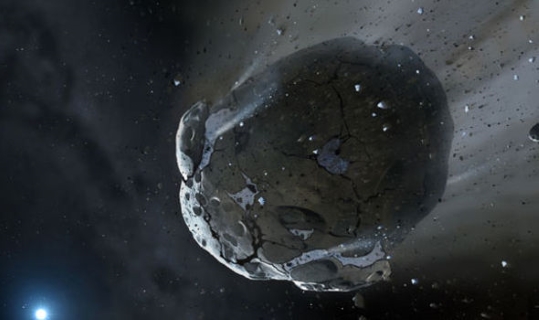 EXCLUSIVE: ‘Mountain-sized asteroid’ that could wipe out Earth heading OUR way

A MONSTER-sized asteroid that could wipe out life on Earth if it struck is set to brush past our planet .

NASA is monitoring the “close Earth” pass of the mountain-sized space rock – which measures 1.5-miles across – that will hurtle past the planet at 45,450mph, or 70 times the speed of a jumbo jet, on July 25.

The “cosmic close shave” comes as scientists and astronomers tomorrow join forces to demand more global action to develop systems on Earth that could destroy or divert a large asteroid, in the event one could take a direct collision course with the planet.

The asteroid due to approach Earth at the end of July, named 1999 JD6, is 15 times the size of anything else on the radar and dwarfs the three recent large passes that had some astronomers spooked.

These included the 1km-wide Icarus which passed five million miles away this month, the 1mile-wide 1999 FN53 in May and the 1km-wide 2014-YB35 in March.

Today is the first ever World Asteroid Day, backed by Queen legend Brian May and TV astronomer Professor Brian Cox, and will see events take place all over the globe including at the Science Museum in London.

Although 1999 JD6 is expected to pass Earth safely at a distance of around four million miles, it is feared a rock of a similar size will one day be on a direct path with our planet, meaning action would have to be taken to prevent the devastation that would follow.

If such a large asteroid hit us or broke up in the Earth’s atmosphere, it would be like hundreds of nuclear bombs exploding and send tsunamis rippling across oceans.

Asteroid 1999 JD6 is also coming in much closer this time than the 12.4million miles it passed by Earth on its last encounter five years ago in July 2010.

In May, when 1999 FN53 passed at 6.6million miles, worried astronomers warned it was an eighth of the size of Mount Everest and a collision would be nothing short of catastrophic triggering mass destruction, earthquakes and global extinction.

Bill Napier, professor of astronomy at the University of Buckinghamshire, said: “People are concerned about an impact from a very large asteroid, and the impact of something of this scale would be nothing short of global.

“It would undoubtedly lead to the deaths of around 1.5 billion people, we are looking at a mass extinction of humanity.

“To understand the impact of something on this scale, you would have to look to the science fiction writers, it is incomprehensible.”

But organisers of World Asteroid Day are just as, if not more, concerned about smaller asteroids of up to 150 metres in length striking the planet.

Alarmingly, a 70metre-long asteroid called 2015HM10 – the size of a jumbo jet – will skim Earth just a week after World Asteroid .

And later on July 19 a “bridge-sixed” 500metre-long asteroid will pass Earth at 1.5million miles.

Although astronomers have spotted almost all the big asteroids that come near our planet, the upcoming close approach of 2015 HM10 on just beyond the Moon is a sign that we’ve still got much more work to do

World Asteroid Day takes place on the anniversary of the 1908 Tunguska asteroid strike, the most recent major collision in world history.It saw a 50-metre lump of extraterrestrial rock explode above Siberia, sending meteorites hurtling down.Flattening around 80million trees and sending a shock wave across Russia, measuring five on the Richter scale, it would have been catastrophic had it taken place over a major city.Prof Alan Fitzsimmons, expert in asteroids and comets at the Astrophysics Research Centre at Queen’s University Belfast, told Express.co.uk: “Although astronomers have spotted almost all the big asteroids that come near our planet, the upcoming close approach of 2015 HM10  just beyond the Moon is a sign that we’ve still got much more work to do.”This is not an unusual event and there are millions of asteroids this big to find. If one this size hits us in the decades or centuries to come it would be similar or larger than the Tunguska impact in 1908.”These smaller asteroids are known to travel much nearer to Earth and could even strike out of the blue – like the 20-metre long meteor that unexpectedly exploded above Chelyabinsk in Russia in 2013, injuring 1,500 people and damaging around 7,000 buildings.NASA admits it has no idea where 98 per cent of smaller asteroids and large meteorites are heading at any time.

Professor Cox is certain there is already an asteroid with Earth’s name on it, so action needs to happen now.

However, he believes warnings are not being taken seriously enough, and that is why he is backing the global campaign.

Ahead of World Asteroid Day, he spoke of a near miss “the size of a bus” last year, adding: “There is an asteroid with our name on it and it will hit us.”

He continued: “We didn’t see it coming. We saw it on the way out, but if it had just been a bit further over it would have probably wiped us out.”

That asteroid flew by at a staggering 38,000 miles from Earth – only a sixth of the way to the Moon.

Former astronaut Ed Lu says the asteroid threat is so real he described it as a “cosmic roulette” and “blind luck” is our saviour so far from a serious impact.

NASA largely in agreement with the campaigners.

It has recently scoffed at conspiracy theorist predictions that a huge asteroid will destroy the Earth in late September.

But, NASA scientist Jason Kessler, who runs the ‘near Earth” asteroid programme that monitors around 1,400 space rocks within six million miles of us, said: “The likelihood of something hitting us in the future is pretty guaranteed, although we’re not freaking out that there is an imminent threat.”

NASA believes an asteroid won’t happen for a few hundred years, giving humans time to develop systems to deal with the threat.

And Express.co.uk reported earlier this month, that may include firing nuclear weapons to either blast them before impact or send them off course to avoid a strike.(source)

Doomsday Asteroid That Will Destroy Earth On