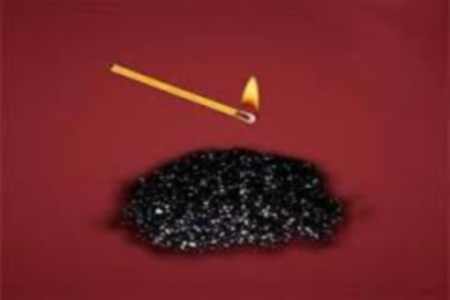 How to make gunpowder

There’s only two things in this world that can make you feel like a man. The first, alcohol is usually freely available excepting where the god squad has got there first. The second is gunpowder, which due to a rather disturbing trend towards common sense in the world is largely restricted in most jurisdictions. Whether it’s zombie attacks, nuclear holocaust, brutally overthrowing the government or just for the maiming of defenceless small furry animals, gunpowder is the mad note. It’s one of the dozen or so things you need to remember how to make for when the world collapses, and we’re all thrown back in to a medieval existence if you’re to lord it over your fellow man. For those interested, everything you need to know to survive in these situations .

Gunpowder consists of a nitrate, typically saltpetre (potassium nitrate), to oxygenate the reaction. Some easily combustible carbon, in the form of charcoal a touch of sulphur to make the whole mix burn fast. The ingredients should be finely ground, and fairly evenly mixed. The smaller the grains of the mixture, the faster and more evenly it burns and the bigger the bang. Even grinding the powder finely can still produce mixed results and two piles even taken from the exact same batch may burn at different rates. In this case, “corning” may be required. This involves mixing the raw powder with water and letting it dry out to form a fine black cake. The resulting cake, when crushed, will be far finer and different piles of the mixture will burn more consistently. The basic ratio is 75% saltpetre, 15% charcoal and 10% sulphur.

It’ll take you about a year before you can get your first batches of gunpowder off the production line, due to the time it takes to make saltpetre .Don’t be discouraged over the long lead time, if the Chinese were making it 600 years ago, you’ll look pretty damn stupid if you fail.

Elemental sulphur is typically deposited around volcanic vents and other such unpleasant places. Britain, being a green and pleasant land, doesn’t have any of these so you’ll have to make your own. What Britain is oversupplied with is slag heaps from former coal mines. Your best bet is to dig through a few of these until you have several kilograms of iron pyrite (ferrous sulphide). Iron pyrite, otherwise known as fools gold, is a sparkly crystalline material. If the mine you’re looting was formerly open to tourists, you’ll probably also be able to find large quantities of it in the gift shop.

You’ll then need to build yourself a nice bit of eighteenth-century infrastructure. Start by digging a furnace pit big enough to hold your stock of iron pyrites and a goodly supply of wood. Leading out from the furnace pit, dig a horizontal flue some 12 metres in length. At the end of the flue closest to the fire pit dig out a little reservoir and at the other end construct a condensation chamber consisting of a brick building divided inside in to horizontal chambers, maximising the length the gas has to travel to escape.

Once your furnace is constructed, set light to the wood in the fire pit and cover the whole thing over, then retire to a safe distance for a couple of days. The thing will give off a whole bunch of sulphur dioxide and probably some arsenide gases too for added lethality, so it’s best to stay upwind. When the fire has comfortably burned itself out, dig the thing up and reap the fruits of your labours. The reservoir should contain some nice pure elemental sulphur, and more should be deposited in the condensation chamber though this later will need careful washing to remove sulphuric acid before handling.

The rest of the known Universe

If you’re not in England and no volcanoes are nearby, it’s not to worry: you don’t absolutely need sulphur. Black powder can be made simply with saltpetre and charcoal. The sulphur simply makes it all burn much faster, and can be substituted with something else which can burn fast enough to produce the bang you want. Experiment, just like the Chinese did a thousand years ago.

Though there are naturally occurring nitrates such as bat guano that you might use in your gunpowder, the most readily available source is, well, you. Every time you take a piss, you’re chucking a valuable resource down the drain. To harness the latent explosive power of your own urine, you’ll need a big water bucket which you should then jam-pack full of straw. When you take a leak, do it in to a bucket and leave it standing around for a day or so to reduce. At the end of the day, chuck the bucket of stale urine in to the barrel. Make this a fun part of your daily routine.

After a year or so, take some wood ash from your fire pit, grind it finely and spread it over a loose wooden bed. Place the wooden bed over a water tight container, then take the straw out of the barrel and sluice liberally with clean water. Leave the water to evaporate, and you should be left with some white residue, which is saltpetre.

This is the easiest of all ingredients to get hold of. At the beginning of the apocalypse you can just loot it from supermarkets and petrol stations in convenient little bags. Later on, you can just dig charcoal burning pits. Stock the pits with some nice fragrant softwood, light them, cover them over with earth and come back in a week. Compared to the sulphur, simplicity itself.

Responsible use of gunpowder

Remember that Conservatives think you should be able to have lots and lots of gunpowder, but no alcohol and definitely no sex (sex outside of marriage only; sex with your spouse is encouraged). For this reason, it’s incredibly important to blow up anyone who looks like a Conservative first. It’s just good manners.

First, make yourself a bow from string and sticks and some arrows with chicken feathers, sticks, and flint. Wait until dark, and go hunt creepers. Do not engage the creepers in melee combat: they will simply explode, killing you. Instead, find a creeper from a safe spot far away, and shoot at it until it dies. Go to the creeper’s place of death and pick up the gunpowder it drops. Then, get off of Minecraft and follow the instructions above.

Other things you may care to make

Come the apocalypse, your pre-industrial civilisation will just be crying out for things they can use to maim opposing tribes. Remembering how to make gunpowder will, of course, greatly increase your status in the group but for the real renaissance man status, you may also want to make up some thermite. Thermite is a mix of iron oxide (rust) and aluminium filings, both of which will be really, really easy to get in the ruined cityscapes of the grim meathook future. It has dual properties of not only being great for assisting in looting by adding cutting power to your blowing up things power, but it’s also good for welding too, so you can use it to help make a nice steam engine and really get your industrial revolution rolling.

HOW TO MAKE A GAS MASK: BASIC PRINCIPLES AND METHODS (DIY Items Which can Potentially Save Your Life in Case of a Disaster)