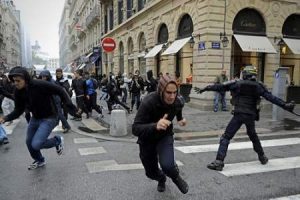 You’ve probably heard the term “situational awareness”: this is it. You need to be alert not only to your goal (finding your seat in a theater, getting to the proper shop in the mall) but also to the general feel and flow of the environment around you. You see how quickly the average person is walking, where they are going, and how they behave. This allows you to easily notice abnormalities over time, ranging from the benign (someone late to a movie and rushing to get in) to the hostile (someone waiting for the right moment to start shooting up the place). In particular, keep an eye out for apparently needlessly odd behavior, since those are usually signs of extreme stress. Thieves, for example, tend to fidget or behave oddly just before announcing their intent. Just being alert can sometimes deter lesser thieves who are looking for easy prey, but it can also be invaluable in seeing the early signs of a threat and getting out before something goes wrong.

Always know where you’re going, in and out

As we’ve mentioned before, your panicked fight-or-flight response is great for instinctive action, but poor on the long term planning. You need to use your situational awareness to know where you would go if something suddenly happened, with at least one backup emergency exit to work with if possible. The biggest problem during most disasters in crowds or buildings occur when people either don’t know where to go or when they all choose the most obvious exit even if it is blocked.

Be a Gray Man in the crowd. Although this is of little help during a fire or explosion, it could help save your life during a potential shooting. Ensuring that you won’t be specifically targeted may also allow you a moment or two to think once the emergency has begun.

Stay away from dark corners as well as the center stage

Generally speaking, dark and out of the way areas are where scum tends to congregate particularly in places like malls. The fewer potential witnesses, the greater the chance that some unsavory types might decide to take advantage of your presence. Likewise, maintaining a healthy distance from the front rows where the majority of the people will be located at a concert or other event minimizes the chance that you’ll be caught in a generic blast or shooting situation. Following the idea of blending in, filtering into the middle of a crowd where you can easily leave quickly is probably the best possible situation.

Be ready to act.

If you’re caught between a rock and a hard place, there is no good reason to go down without a fight. Always err on the side of preserving your own life and staying out of the way of police and other emergency responders, but if push comes to shove be mentally ready and willing to take action. Kick doors open, break windows, do whatever you have to in order to survive. In our freakish legal world you may well have to answer for even the most appropriate of actions…but your clean legal bill won’t mean much to the mourners at the funeral.

As an addendum to this, also be willing to lead. Call for other people to help with whatever you might need: when escape is on the line you might just get some willing hands! It all depends on your initiative, so be willing to guide others if you need to.

What would you do to improve survival chances in a crowd during an emergency? Let us know in the comments below!

The End Of The World Are You Ready?