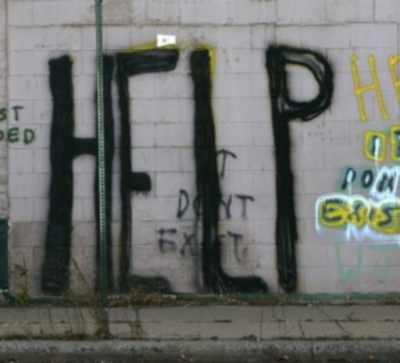 The Economic Collapse….people envision bank runs, life WROL (without rule of law), piles of worthless currency, rampant homelessness, and breathless news reports on CNN and the network channels (if you happen to still have access to a television, that is). They imagine a grim, gray world, devoid of entertainment, with unwashed citizens digging desperately through the trash.

Because of this apocalyptic image, the idea of an economic collapse seems pretty far-fetched to most people. After all, we still see cars in every driveway, lights in every window at night, children going to school and parents going to work.  Everything’s fine, right?  The economic collapse is only a conspiracy theory, cooked up by those crazy libertarians and right-wingers, right?

Sadly, no. It’s a fact and it’s all around us, right now.  The economic collapse has occurred quietly and stealthily.  In fact, many people probably think that it has only happened to them, as job losses occur, utilities get cut off, and the pantry gets more sparse.  They don’t talk about it because poverty is a humiliating state – they suffer quietly, not realizing that the next-door neighbor is probably in the exact same situation.  They don’t realize that they aren’t alone.

Less than half of America is employed right now.

Despite the deceptively whitewashed claims of the Job Report that say that things are looking up,  Breitbart released an article on July 5 refuting their optimistic assertions.  While there are technically “more” jobs, this is because positions that used to be full time are now part time – meaning that two or more people hold what used to be one job.

According to the article, only 47% of Americans are employed full time. In an age where most families require two parents to work full time in order to make ends meet, this is a devastating economic blow.

The administration is careful not to divulge the entire story, instead playing with numbers and percentages to portray growth instead of dismal decline.

If today the same proportion of Americans worked as just a decade ago, there would be almost 9 million more people working. Just in the last year, almost 2 million Americans have left the labor force. With a majority of the population not holding a full-time job, it isn’t surprising that economic growth has been so weak.

In June, the number of Americans who wanted to work full-time, but were forced into part-time jobs because of the economy, jumped 352,000 to over 8 million.

The Jobs’ Report is increasingly measuring only a part of the American economy. While Friday’s report was better than expected, it only measures those who are working or actively looking for work. There is a growing number of Americans slipping through the cracks of the job market.  (source)

Consumer spending is on the uptick, a sign that the government likes to say is positive. However, people are forced to pay more to get less, just to maintain a basic standard of living with food, utilities, and gasoline.  People aren’t spending money on goods – they are spending it on essential items and services.

Fuel:  The price of transportation has gone up dramatically. The price of gasoline has risen a staggering 294% over the past 10 years.  That’s right – 294%!!!! This, of course, affects anything that must be transported, which is, well….pretty much anything.  If your food comes from another country or continent, you can add high fuel prices to the cost of that item.  If your television was made in a factory on the other side of the globe, tack on some extra transit charges.  This one item – the price of fuel, is the catalyst that is making the price of everything else increase.

Food: Furthermore, if you are  a commuter, the price of getting back and forth to work is higher. So again – you are paying more for the basic essential supplies you need to live your life in your current fashion.

The price of food is climbing, and doing so rapidly.  Significant increases have occurred over the past two years, particularly in truly healthy foods like fresh fruits and vegetables, as well as organic products.  Deceptively, package sizes are getting smaller (or are staying the same size but containing less food).  The price, however, remains the same as before, in an attempt to trick consumers into believing that prices are not actually rising.  Apparently, 12 ounces is the new pound and 3 quarts is the new gallon.

Utilities:  Utility rates are climbing, making it increasingly difficult for struggling families to keep the lights on and the temperatures pleasant.

The increase, which beat economists expectations for a flat reading, was driven by higher spending on services as outlays on utilities posted a second straight month of hefty gains. Spending on goods, a key measure of underlying demand, fell.

“Utilities made up a pretty decent chunk of spending,” said Ryan Sweet, a senior economist at Moody’s Analytics in West Chester, Pennsylvania. “When you extract from that, spending was less than impressive in March. The economy is slowing.”  (source)

The prices of electricity are rising dramatically.  Customers have been warned that they will face increases.  Smart meters have been installed nearly everywhere.  Many places are instituting time-of-day pricing, making it only affordable to do your laundry in the middle of the night.

Part of the reason Americans are facing higher prices is President Obama’s War on Coal.  (In his own words he promised to bankrupt the coal industry.)  If Obama can’t close down power producers through the front door, he does it through the back door, via the EPA.  Even though the climate change theory through CO2 emissions has been completely debunked, the EPA is still passing draconian laws to reduce our “carbon footprint” and thus raise the prices on power.   Obama has shut down 8 coal mines across 3 states, and he and his buddies at the EPA have plans to scale back production at over 200 coal-powered plants via a regulatory assault.

More than half of all Americans receive some form of government benefit: food stamps, supplements, health care, to name a few.  We are in big trouble because the people who work for a living are being outnumbered by those who vote for a living. Politicians buy votes with giveaways and freebies. (Who can forget the notorious Obamaphone video?)

Michael Snyder of The Economic Collapse Blog wrote last year, “A recent Forbes article by Bill Wilson estimates that over 165 million Americans are government dependents to at least some degree….”

New research from Ranking Member of the Senate Budget Committee Jeff Sessions (R-AL) reveals that this reality may already be here, with more than 107 million Americans on some form of means-tested government welfare.

Add to that 46 million seniors collecting Medicare (subtracting out about 10 million on Supplemental Security Income, Medicaid, and other senior-eligible programs already included in Sessions’ means-tested chart) and 22 million government employees at the federal, state, and local level — and suddenly, over 165 million people, a clear majority of the 308 million Americans counted by the U.S. Census Bureau in 2010, are at least partially dependents of the state.

The late Margaret Thatcher warned, “The problem with socialism is that you eventually run out of other people’s money.”  That is what we’re seeing right now – our insurmountable debt is multiplying faster than Bernanke can print $100 dollar bills, and eventually, this bubble won’t be able to hold anymore and it will pop.  That is the point at which the stealth collapse becomes big, real, and undeniable.

The goal for most of us is to maintain our independence while the powers that be try to return us to serfdom through limiting our access to affordable necessities.  You simply cannot rely on anyone else to bail you out of this (Silly peasant, government bailouts are just for billionaires!)  You must change your lifestyle and meet this head-on, using strategies like the following.  Stop looking for a dramatic news report to tell you that the collapse has arrived – it’s here.  Figure out how you’re going to survive it.

Cut your expenses.  Create your own austerity plan to reduce your expenses as much as possible.  This is not caving to the pressure – this is a way to assert your independence, by making your own cuts instead of government mandated ones.

Learn to provide for many of your necessities alone.  Grow food, join a co-op, raise chickens and rabbits.  Even a small salad garden in a kitchen window can help you to offset high food prices. Learn to sew, mend, repair, preserve, and build.  Decrease your dependence on consumer goods and services.  Embrace your frugal side and opt to be cheap by choice.

Reduce your dependence on the power grid.  Use rain barrels to collect water, direct the gray water from your washing machines to reservoirs, hang your clothes to dry, and use solar lighting whenever possible.  The less you depend on public utilities, the lower your bills will be, which could mean the difference between having some services or being totally without them.

Find other ways to stay warm.  This can be difficult if you rent but it can still be done.  Consider making modifications to allow for the use of portable wood heaters, look into different types of camping heaters and make your plans and purchase your supplies well before you need them.  Learn how to safely store fuel for these secondary devices. Invest in battery operated C0 monitors (and extra batteries). Get sleeping bags with a warmth rating for low temperatures, consider a small tent where you and family members can sleep in your living room to pool body heat, and stock up on cold weather clothing like hats, fingerless gloves, long underwear and heavy sweaters. Find ways to insulate and separate one main living area off from the rest of the house by closing doors, hanging curtains in doorways, etc.

Watch the prices of your utilities.  As the prices begin to rise, more and more people will be unable to pay their bills and eventually their power will be shut off.  Check your bill each month and as prices increase, use less power. Redefine necessities.  You can hand wash your clothing, cook on a woodstove or outdoor grill and can foods to preserve them instead of relying on a large chest freezer. None of these are the way things are commonly done these days, but if you can manage to keep power on for the most basic necessities, like running the pump for your well, running a refrigerator, and maybe powering up a laptop, you’ll be living in luxury in comparison to those who have no power, no heat and no running water.

Stop looking for a huge, life-changing calamity.  In reality, the economic collapse is the culmination of many small events, rising prices,  lower (or lost) incomes, and the deliberate erosion of our self-sufficiency by those who would control us.

Please feel free to share any information from this site in part or in full, giving credit to the author and including a link to this website and the following bio.

Daisy Luther is a freelance writer and editor.  Her website, The Organic Prepper, offers information on healthy prepping, including premium nutritional choices, general wellness and non-tech solutions. You can follow Daisy on Facebook and Twitter, and you can email her at [email protected]

Gerald Celente Red ALERT : Prepare For The Worst for Global Systemic Collapse 2019 – The Death of The American Dream