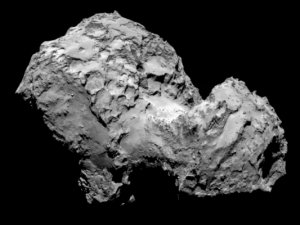 We have all heard of city killer asteroids, we have all seen the disaster movies of the impact, but few of us have any idea just what an asteroid bearing down on us would look like. 3km, 1.86 miles, is generally considered a small distance, but when considering a lump of space rock that size hitting a major metropolitan area…it’s massive.

Our sense of scale tends to adjust to circumstances. So when we think about comets it is easy to compare them with other astronomical objects. In which case comet 67P/Churyumov-Gerasimenko, just 3km wide, sounds tiny.

However, as you can see in the image above, things look rather different when you compare the comet to something we are really familiar with – such as tall buildings.

While Churyumov-Gerasimenko is small enough that one could walk from one end to the other fairly in less than an hour, it’s easy to forget the three dimensional nature of something like this – 3km across is no big deal, but two kilometers helps make sense of what happened to the dinosaurs.

The image is by @quark1972, who combined a photograph of Los Angeles with an image from the Rosetta spacecraft rendezvousing with Churyumov-Gerasimenko, prior to going into orbit and eventually landing.

Image taken August 2 at a distance of 550 km. The long exposure helps illustrate the comet’s activity: 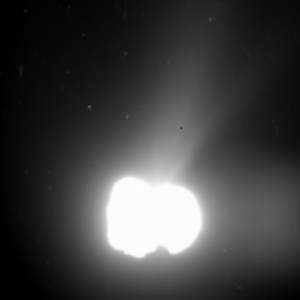 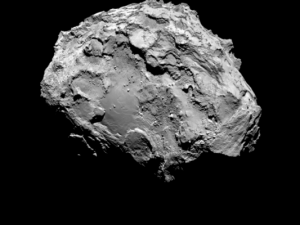 Image taken August 3 at a distance of 285 km. The comet’s rotation gives a new perspective:

The head of the comet can be seen at left, with the neck and body on the right. This image was taken a distance of only 120 km. 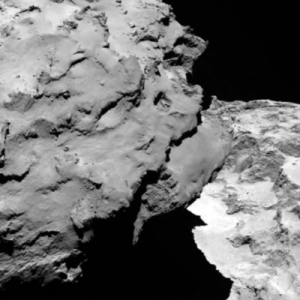 This is the base of the comet’s body, taken at a distance of 130 km:

While Rosetta will be doing its best to touch down very gently on the comet’s surface, we can’t count 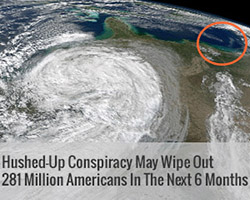 on Churyumov-Gerasimenko doing the same if it ever paid LA a visit. You can get some idea of what would happen in such a collision here, although the scale of the damage depends greatly on the impact speed you choose to enter.

Churyumov-Gerasimenko never even comes close to Earth, but many others do. With new asteroids being discovered on an almost daily basis it stands to reason that one day there will be an impact, let’s hope it’s a small one rather than a 3km city killer.

Sold Out After Crisis (Best 37 Items To Hoard For A Long Term Crisis)
Source : undergroundmedic.com

US Scientist Confirms Russian Fears Of Nibiru Planet, Could Begin to Harm Our Earth this Month