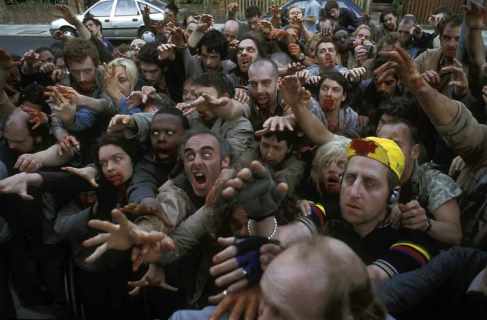 We bet you never would have guessed that the diagnosis of one (1) human being with Ebola virus would lead to a whole bunch of daft conspiracy theories, did you? Don’t be ridonkulous, you would say to yourself. We live in a highly developed modern technological society with terrific special effects in our movies, telephones with more computing capacity than was needed to go to the moon, and medical care that is second to none, if you can afford it at least. We are so advanced that we aren’t even impressed by digital watches anymore, that is how far we have come from the primitive ape descendants we used to be.

And yet, Ebola Stupidity Syndrome is threatening to overwhelm America. Rush Limbaugh is saying that Barack Obama wants America to get Ebola as revenge for slavery, and wackaloon radio lady (every wackaloon has a radio show now) Laurie Roth insists that Barack Obama is inviting, or at least allowing, members of ISIS who are infected with Ebola to infiltrate cities all over America so that they can infect everyone, giving Obama an excuse to declare martial law, take our guns, and give errebody a fake vaccine that will either kill them or track them by GPS or both. This makes Roth’s previous claim that Barack Obama was genetically engineered to aid in a Muslim takeover of America seem pretty darned reasonable by comparison.

Oh, and in addition to those two, there’s also some crazy shit out there, too.

You know you live in interesting times when Rush Limbaugh has the third-stupidest conspiracy theory of any given day. Here it is. David Quammen, an American writer, said this on Anderson Cooper 360 last week:

You can’t isolate neighborhoods; you can’t isolate nations. It doesn’t work. And people talk about, “Well, we shouldn’t allow any flights from Liberia.” I mean, we in America, how dare we turn our backs on Liberia? Given the fact that this is a country that was founded in the 1820s, 1830s because of American slavery, we have a responsibility to stay connected with them and help them see this through.

By today, Limbaugh had converted Quammen’s statement that we have a moral responsibility to help Liberia into this weird interpretation: Liberals, exemplified by Quammen, believe that America “bears responsibility for these people in Africa getting this disease,” and that “the only reason they are there is because of American slavery,” and so America is culpable for the sufferings of Liberians facing Ebola. Dude, “moral duty” to help a nation is not the same as “America is to blame.” Oddly, Limbaugh has no such problems saying we owe a moral duty to Israel, but those folks are white.

In any case, this got Limbaugh to thinking about how liberals all blame slavery for Ebola (which we totally do, it’s so true), and so, obviously, liberals also “think we kind of deserve a little bit of this,” which is why Obama hasn’t banned travel from Africa:

“The danger we have now is that we elected people in positions of power and authority who think this or think like this in terms of this country being responsible, this country being to blame for things and it’s that kind of thinking that leads to opposition to shutting down airports from various countries,” Limbaugh explained, referring to the Obama administration’s handling of the crisis.

“It leads to opposition to keeping these people out of the country: ‘How dare we? We can’t turn our back on them! They exist because of us. We can’t turn them away!’” he said.

Or maybe, as public health experts who have studied the effectiveness of travel bans have concluded, they don’t work and can make matters worse. But the REAL reason is liberal guilt over slavery, which makes us feel like America should probably get Ebola and die, too. This is just logic, after all. Besides, what do experts know? They just make up stuff like Global Warming anyway.

Next on the Crazy Train, we have Laurie Roth and her ISIS Hypothesis. Roth explains at Matt Barber’s Home For People Who WND Can’t Take Seriously that the Obama administration is, obviously, busing in millions of illegal aliens for the purpose of spreading disease. This we all know. BUT THERE’S MORE! ISIS is already sending biological suicide bombs to American cities so they can all go off and spread Ebola everywhere!

Now, ISIS — that we are pretending to attack — is bringing in their version of suicide bombers throughout America. According to the breaking research of Whalid and Ted Shoebat, (regular guests of my national radio show), ISIS is planning to bring in people through out America infected with EBOLA. They are most likely already peppered throughout many cities now.

Forget suicide bombers with explosives attached to them. They have evolved to the next level now. ISIS might as well join the disease party, so by Christmas we can have a nice variety package of destruction and horror…lets see, EVD 68, EBOLA, TB and Scabies. Anyone want some bloody slush with your Christmas hors d’oeuvres?

And why is this being allowed / promoted? Simple! Barack Obama is an evil genius who, instead of wasting time building a secret base under an extinct volcano, is set to Destroy America from inside the White House. It’s really quite a tidy little plan!

And what is the purpose of all this disease, lack of protection and border security??? It appears to be potentially the “full meal deal” for Obama and his goals.

1) Establish over the next few years mindless, dependent and UN-American foreign voters and supporters for Obama and his goals.

2) Punish America for her achievements by riddling her with diseases and maiming her children.

4) Demand adults and children take some sort of mandated/mystery vaccination that kills off even more people.

My prediction is that a forced vaccination plan from Obama and his administration is on its way. This will not only allow someone put in control (so Obama can’t be blamed) to release something potentially fatal into our system, but also act as a tracker — the complete end of our privacy and freedom.

Exactly how a vaccine can simultaneously kill us and track us, or why Obama would want to track our corpses and invade their privacy, she doesn’t say — and in fact, the deadly tracker vaccine is just more proof that Obama is a completely insane megalomaniac. You just have to look at it coolly and rationally like Smart Person Dr. Laurie Roth has. Also, you don’t have to worry that Obama’s nefarious plan will work, because God will protect America. What a relief!

And then finally, from some YouTube crazy who calls himself “Red Pill Revolution,” the New World Order is exposed with a map of where the CDC is planning to quarantine patients, which is an exact match for where all the immigrants are being relocated, according to flumflamflibberthings dot.com, and then on top of all that, AGENDA 21 ROCKEFELLER NEW WORLD ORDER! It’s all there right on the maps! It’s all connected! Don’t worry too much about “Ebola,” by the way, since it’s all just a psy-ops cover for the real agenda of moving everyone into cities where they can be controlled by the NWO.

Now, a crazy person might look at all this and say, “Oh, yeah, those are maps that show areas where populations are shifting, and that’s not especially surprising that several trends might converge in large cities.” But a smart person who’s paying attention to REALITY can easily see that all the evidence points to Denver, home of the Satanic New World Order Denver International Airport, where a whole underground city is being prepared, and Denver will become the new U.S. capitol!!! Oh, also, the reason none of the super-mega-uber-cities are in the Plains states has nothing to do with an already-smallish population; it’s actually because the New World Order is planning to set off the Yellowstone Supervolcano and kill half the population of North America before enslaving the survivors.

For pete’s sake, it’s all right there in The Hunger Games, which is not merely a novel/movie franchise but is in reality “the biggest New World Order propaganda predictive programming film out there right now,” explains our intrepid narrator, before closing with “Need I say more?”

On the other hand, maybe there’s nothing to get too upset about. The always reasonable John Stossel appeared on Fox’s Outnumbered Monday to explain that Ebola is just a lot of empty hype, just like Global Warming, which is also not a thing. And who is responsible for all the hype? Duh: Women. Stossel offered this advice, free of charge, to President Obama (just in case he’s not trying to track/kill us all with a vaccine):

“He should get up and say this is an overhyped risk being pumped by news media like us, especially you women who are more scared of Ebola than men — I’m being really sexist here — But there are real risks in life, but Ebola is — it may prove to be, it’s unlikely. It’s hard to catch. The regular flu kills thousands and thousands of people. There’s so much other stuff. Driving a car in the rain, promiscuous sex, drinking too much. There are real things to worry about. This distracts us from that.

Yeah, what he said. Besides, there have been a whole lot of fake threats out there, all of them equally over-hyped by the media:

And it’s what they said about SARS, bird flu, flesh-eating bacteria, all of the stuff that was supposed to — global warming — that’s going to kill us.

And that’s your Ebola Freakout Wrap-up. We’re guessing things will calm down by tomorrow, or maybe we’ll all be dead. DEAD, DO YOU HEAR US? DOOM, DOOM, DOOM!!!!!