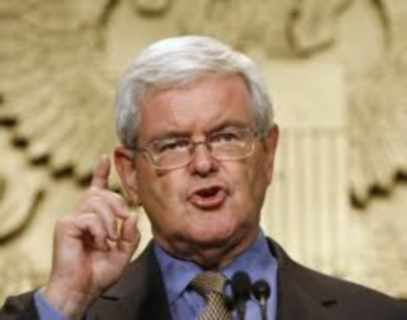 Within a year, nine out of 10 Americans could be dead. And whatever causes the national apocalypse—be it North Korean malice or the whims of the sun—the downfall will ultimately be our own fault.

That’s the fear of Newt Gingrich and other members of a high-profile coalition who are convinced that our fragile electrical grid could be wiped out at any moment.

Their concern? Electromagnetic pulses, the short bursts of energy—caused by anything from a nuclear blast to a solar flare—that can wreak havoc on electrical systems on a massive scale. And the coalition believes it’s coming soon.
“I think we’re running out of time,” said Peter Pry, a former CIA officer and head of a congressional advisory board on national security. And if the worst happens? “This gets translated into mass fatalities, because our modern civilization can’t feed, transport, or provide law and order without electricity,” he said.

While some see the coalition as alarmist—and others dismiss them as out-and-out quacks—the coalition boasts some prominent and influential names. Pry and Gingrich are joined by former CIA Director James Woolsey.

“It wasn’t difficult persuading them” to join the coalition, Pry said. Gingrich “has known about EMP and cared about it for many years.”

Last year, Gingrich told members of Congress that an EMP attack “could be the kind of catastrophe that ends civilization—and that’s not an exaggeration.”

The coalition’s members insist the scenario is a real threat, and not the plot of a Michael Bay movie or a Cormac McCarthy novel. They believe a single nuclear blast at 300-400 kilometers in altitude—about the height of the International Space Station—could take down all power in the U.S. Even an explosion just 30 kilometers up would take out the Eastern grid, which supplies three-quarters of the country’s power.

That’s just day one. With no power, the country would lose transportation, our food would go bad and we’d lose the communication tools we’ve come to rely on. To envision what that would look like, just picture New Orleans after Hurricane Katrina, Pry says.

The coalition estimates that we’d lose up to 90 percent of our population within a year.

But it wouldn’t necessarily take a hostile foreign power’s nuclear trickery to spark the downfall: The coalition claims American demise could come from the flares of a fickle sun.

A giant solar flare that triggers a geomagnetic storm could inflict the same damage as a high-altitude nuclear blast—but do it on a global scale.

The last such flare—known as the Carrington Event—happened in 1859, frying telegraph lines around the planet. According to Pry, such events happen about every 150 years, so we’re already overdue for another.

By comparison, a Lloyd’s of London study used a wider range of 100-250 years. The study also said a solar event would only cause extended blackouts for 20-40 million people—not an insignificant number, but nowhere near the globe-encompassing disaster the EMP Coalition predicts.

And Kristof Petrovay, a Hungary-based solar physicist whose work is often cited by NASA, said predicting the interval of such flares is more-or-less a fool’s errand. “There’s really no way to tell when or how often it will happen again,” Petrovay said.

Regardless of when or if another flare hits, there’s a wide range of assessments of its potential damage.

Most observers stop short of forecasting the doomsday scenarios laid out by the Pry-Gingrich coalition, but they still see serious problems.

In 2008, the National Academy of Sciences looked at the possibility of a solar flare and its effects. Its findings, while less apocalyptic than the EMP Coalition’s warnings, were still dire. A solar storm two-thirds the size of the Carrington Event could still knock out power for 130 million people. The fallout? “[W]ater distribution affected within several hours; perishable foods and medications lost in 12-24 hours; loss of heating/air conditioning, sewage disposal, phone service, fuel re-supply and so on.”

If we were hit with another Carrington-sized storm, the report said, it could take months to get parts of the grid back to functional. In the first year alone, it would take an economic toll of $2 trillion, about 20 times the cost of Hurricane Katrina.

According to Petrovay, the worst effects of the flare would be felt in North America, where the highly-connected grid could exacerbate problems and systems running near peak capacity have less room for error. “I have doubts whether [a solar storm] would really take out the whole grid, but probably shutdowns would occur in many places,” he said.

RELATED  : Electromagnetic pulse (EMP) caused by a nuclear explosion high over the United States – Imminent danger to the U.S. # 1

So how can the U.S. avoid going dark?

Advocates say the solution is as simple as surge protectors Americans use to protect their personal computers—though on a much larger scale.

The coalition wants such protectors placed across the electrical grid to block harmful currents. In addition, advocates want to protect the extra-high-voltage transformers we depend on with metal, current-absorbing boxes called Faraday cages.

And more replacement parts, especially the giant transformers that can take years to make, need to be at the ready in case we lose critical pieces of the grid. That way, even if an EMP damaged key infrastructure elements, the U.S. would have replacements ready to go.

Without those backups, blackouts could last up to two years, said the Lloyd’s report. Pry pegs it somewhere between four and 10 years. “That’s optimistic because it assumes people would live that long,” he said.

These aren’t new solutions. In 2010, the House passed the GRID Act, which would have protected 300 of the country’s biggest transformers. The measure died in the Senate later that year.

Last June, Reps. Trent Franks and Yvette Clarke introduced the SHIELD Act, which mandates many of the same safeguards.

When the bill was introduced, Gingrich voiced his support, but the House Energy and Commerce Committee has yet to take it up. For that, Pry blames Chairman Fred Upton, who he says is beholden to electricity utilities that don’t want Congress to assert regulatory authority over the power grid.

Upton’s staff responded with a statement following a Wednesday grid security briefing. “We have been active in our oversight of the nation’s energy grid vulnerabilities and we remain vigilant over all emerging threats to the grid, including cyber and physical attacks, solar storms, and electromagnetic pulses,” Upton said.

According to the coalition, protecting the electrical grid would cost only $2 billion, and could be completed in less than five years. Safeguarding all essential infrastructure would come in between $10-20 billion.

Those who are OK with the status quo, Pry says, are “like the zeppelin industry in the 1920s.” By his estimate, utilities could fund grid-protecting efforts by tacking on just 20 cents per year to ratepayers’ bills.

For now, frustrated with Congress, the EMP Coalition is focusing on state-level efforts—while still pushing for action on the SHIELD Act. Maine’s state government recently passed legislation to protect its power supply from EMPs. “We’ve already made more progress at the state level than in five years of beating our heads against the wall in Washington,” Pry said.

It’s clear the head-banging has gotten to Pry. At times, the frustration and urgency in his voice is palpable. He brings up North Korean nuclear tests, a sniper attack on San Diego transformers and missiles found last year aboard a North Korean freighter in the Panama Canal. “All of this looks like preparation for a larger, more coordinated attack,” he said.

RELATED : Woolsey: EMP catastrophe worse than effects of nuclear war -A nuclear device detonated above the U.S. could kill millions, and we’ve done almost nothing to prepare