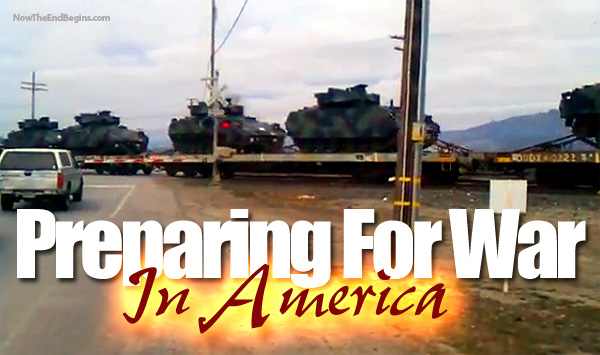 Why is the DHS gearing up so heavily?

The Department of Homeland Security is an internal agency, designed to keep Americans inside the country safe from the threat of an outside attack through the use of obtained intelligence. What started out as an information-gathering organization has, with the election of Barack Obama, morphed into a full-fledged military organization armed to the teeth with every type of armored vehicle, advanced weaponry and billions of rounds of high-impact hollow point bullets.

When Obama ran for election in 2008, he made a startling campaign promise, he said this:

“We cannot continue to rely only on our military in order to achieve the national security objectives that we’ve set. We’ve got to have a civilian national security force that’s just as powerful, just as strong, just as well-funded.”

It now seems in 2014, he is working overtime to see that promise come to pass. Obama is amassing his long-feared private army, now all he needs is his “Reichstag Fire” moment, and his army will roll in just as Hitler’s did in 1933. Though I have been vilified for making the comparison, the similarities between Obama and Hitler are eye-opening to say the least.

What you are seeing in this video is a movement of armored trucks and tanks coming into America, not being shipped out to a foreign battlefield. The video was recorded near Peach Springs in Arizona March 2013. But this is not an isolated event, dozens of people are posting similar videos from all over America.

It has been said that no nation gears up for war without the full intent of going to war. Obama is clearly preparing for a domestic war of some kind.

When Hitler began his rise to power in the early 1930′s, the Jews saw what was happening but they just couldn’t bring themselves to believe what they were seeing. As a result, they were rounded up by the millions into concentration camps and killed in the most barbaric and inhumane ways ever seen on this earth. There was a moment when they could have stopped it, or at least made a very good attempt, but they didn’t. The rest is history, as they say.

We, as Americans, stand in much the same place in 2013 as did the Jews in 1933. We are seeing things coming to pass that are mind-blowingly impossible to believe. We are watching the complete dismantling of our country and our way of life. We are seeing our “land of the free’ morphing into an expanding police state. The Department of Homeland Security is arming themselves to the teeth, but to fight what unseen foe? How many billions more bullets do they need to purchase before we get suspicious? Still think that FEMA Camps are the figment of someone’s imagination?

I am afraid that we will fare no better than the Jews of Nazi Germany. We truly do learn nothing from history.

Top 10 Ways to Turn Your Home Into A Fortress