Predictions for 2014 are actually pretty gloomy. Some are predicting World War 3, others think that 2014 will mark the end of the world, and, perhaps the most likely, a US economic collapse.

As previously reported by The Inquisitr, political predictions for 2014 claim Sarah Palin and the Republicans will rise in popularity, which some progressives may consider the end of the world.

There will appear towards the North
Not far from Cancer the bearded star:
Susa, Siena, Boeotia, Eretria,
The great one of Rome will die, the night over.

Some say the first line is North Korea, which at least sounds reasonable for triggering World War 3. The bearded star is Comet ISON, which may or may not hit the sun. The “great one of Rome” would be the Catholic Pope.

Interestingly enough, Pope Francis does have an end of the world prophecy related to him. Saint Malachy is claimed to have predicted Francis would be the last pope and he’d somehow earn the name Peter the Roman, or Petrus Romanus.

But apparently the Vikings’ predictions for 2014 included Ragnarok, which is their version of Armageddon. Experts have calculated that the Viking end of the world should occur on February 22, 2014, which doesn’t give much time for movie makers to finish Thor 3: Ragnarok before Odin is killed by Fenrir. Supposedly the wolf god named Skoll will devour the sun, and his brother Hai will feast on the moon, so in this case World War 3 is fought with lots and lots of flashlights. 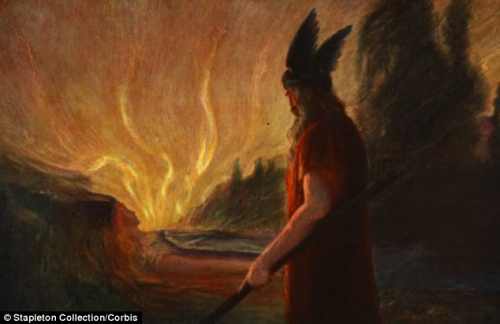 Unfortunately, some political prediction for 2014 are not so humorous. Some pundits believe that President Obama’s muddling in the Middle East may lead to nuclear weapons proliferation and terrorists actually getting hold of WMDs, which could trigger World War 3. Despite the US stock markets doing relatively well at the moment, some financial experts have made economic predictions for 2014 that claim a stock market crash in January is possible. Further, the out of control US debt will cause the US dollar to be removed as the reserve currency and trigger an economic collapse:

“The central issue is confidence in America, and the world is losing confidence quickly. At a certain point, soon, the United States will reach a level of deficit spending and debt at which the countries of the world will lose faith in America and begin to withdraw their investments. Many leading economists and bankers think another trillion dollars or so may do it. A run on the bank will start suddenly, build quickly and snowball.”

Even if WW3 and the US economic collapse isn’t an accurate prediction for 2014, the US Social Security Administration has admitted Social Security disability funds will run out in 2016… or sooner.

When it comes to economic or political predictions for 2014, what do you consider most likely? Or do you prefer World War 3 and Ragnarok?
SOURCE : www.inquisitr.com

3 thoughts on “Predictions For 2014: End Of The World, World War 3, US Economic Collapse”