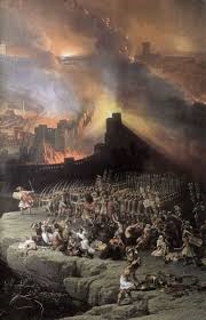 The clear message of this series is that the United States is in imminent danger of losing her superpower status even before the events of end time Bible prophecy and the tribulation.

Those living in the United states of America could wake up tomorrow to find themselves experiencing a completely different world than the one they are comfortable with today. It could be a world where the things the people in the nation take for granted for everyday living are no longer available. Those who were in New Orleans and southern Mississippi after hurricane Katrina experienced first hand what I am talking about.

Without God’s intervention, the United States of America most likely will lose superpower status within the next twenty years due to one or more of the clear and present dangers in this series. Any of them could even happen today.

With the United States today dominating world affairs and with most world trends indicating that fulfillment of end time Bible prophecy is imminent, one has to wonder why the Bible is silent about this overwhelming superpower. The likely reason is that at the time of the fulfillment of Bible prophecy the United States is no longer a superpower. The superpowers the Bible does mention are one from the utter most parts of the North (Russia with her allies), a revived Roman Empire (Europe and some of the Middle East), the kings of the East (China and other nations from the East. Kings is plural), the king of the South (an African alliance of nations) and Babylon The Great (the final world empire of the Beast with headquarters in Babylon, Iraq). The United States cannot be identified as any of these end time world powers.

Many in the U.S. think that America is a Christian nation and that God will not allow any major judgment to come to her. That theory fails for a couple of reasons. The United States is not really a Christian nation. The United States has taken the God of Christianity out of just about everything and has inserted materialism, paganism and every lust anyone can imagine in His place. As Billy Graham was reported to have once said, “If God does not judge America He will have to apologize to Sodom and Gomorrah”. What if judgment brings repentance and what if what is called Christianity in America is so corrupted that God choses to judge the nation in order to get His people to trust in Him rather than in their riches and their self help programs?

It is true that God knows how to deliver His people when they please Him and when it is in their spiritual benefit that He do so. However, God may not deliver people who are identified with his name but insist on living in a sinful lifestyle. God’s Church is perfected by suffering because when she gets rich and comfortable she becomes like her mother, ancient Israel. She believes she acquired it by her own idols and own efforts and she forgets the God who redeemed her. Such is the nature of mankind living in the flesh. The Laodicean church of Revelation who thought she was rich and in need of nothing, was actually spiritually poor and blind and in darkness. This is also the state of most of those who identify with Christianity in the United State of America today.

God will bless a nation that follows Him, and He has blessed the United States tremendously, but America for the most part has now turned her back on God. Ancient Israel was God’s people, but the majority of its citizens fell into corruption and God judged the whole nation and sent the whole nation into exile including the true faithful Jews within her. What then makes the United States of America exempt from judgment because it also has “some” true believers?

In this series, I will only write about the dangers that are imminent to the United States of America that should any one of them occur the impact would remove America from world superpower status. There certainly will be other events of a more regional nature like earthquakes, terrorism, local wars, storms, etc., that will not significantly reduce the superpower status of the United States.

If my thesis is correct that the United States is not in Bible prophecy, and is no longer a world superpower when the end time events occur, the question one might ask is how does the fall of the United States from superpower status happen? I will suggest some possible scenarios that either most do not know about or the blind optimists think can never happen to America. The imminent dangers I outline are clear and present dangers for the United States of America before the biblical tribulation.    By Don Koenig (source)

1 thought on “Prepare For Great Tribulation In America 2015!”