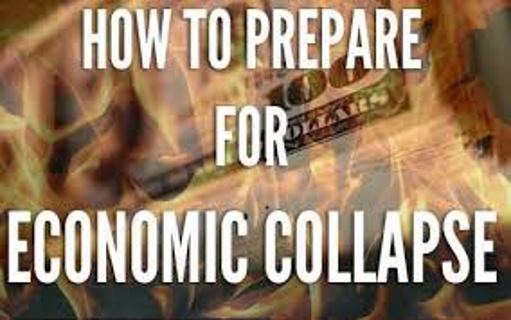 Today, millions of Americans say that they believe that the United States is on the verge of a major economic collapse and will soon be entering another Great Depression. But only a small percentage of those same people are prepared for that to happen.  The sad truth is that the vast majority of Americans would last little more than a month on what they have stored up in their homes.  Most of us are so used to running out to the supermarket or to Wall-Mart for whatever we need that we never even stop to consider what would happen if suddenly we were not able to do that.  Already the U.S. economy is starting to stumble about like a drunken frat boy.

When the economic collapse and stock market crash occurs, it will happen quickly. No one will predict it. That’s because the signs of imminent economic collapse are difficult to see.
For example, the U.S. economic collapse and stock market crash happened on September 17, 2008. That’s the day panicked investors withdrew a record $140 billion from money market accounts.  That’s where businesses keep the cash to fund day-to-day operations. If withdrawals had gone on for even a week, the entire economy would have halted.
If the economy collapses, you will not have access to credit.
Banks will close. That means high demand, and low supply, of food, gas and other necessities. If the economic collapse affects local governments and utilities, then water and electricity will no longer be available…

The Economic Doomsday is here. The second financial bubble is going to soon burst, and there’s nothing anyone can do about it. The Federal Reserve has set up the American economy for financial collapse for printing trillions of dollars back in 2008 and 2009.