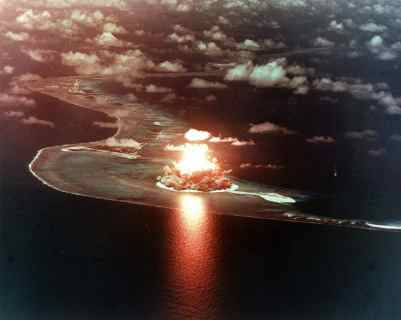 Can you feel it? there’s a treacherous air of normalizing Thermo Nuclear War and the threats are beginning to surface as I’m typing. We have never been so close to world war than the Cuban missile crisis.

Vladimir Putin has said Russia was so fearful of attack at the height of the Ukraine crisis that it was preparing to arm its nuclear weapons. Amid ongoing Russian media speculation that the President was watching the Crimea documentary from his sickbed, Mr Putin’s full interview with Rossiya One provided new insight into his country’s involvement in the annexation of the Black Sea peninsula. In the documentary, which marks a year since the referendum that saw Russia take control of Crimea, Mr Putin described the Ukrainian revolution to oust Viktor Yanukovych in February 2014 as an armed coup “masterminded by our American friends”.

If you can imagine yourself still asleep, you know before you took the red pill, going about your daily routine and wherever you are they’ll be a bit of propaganda on the radio somewhere, the TV will be chirping away at the Come Back Bar in the corner to itself. While you’re not listening overtly its registering in your sub conscious all the time. Thus when the time comes when war is announced those that are not awake have been programmed beautifully to go with the countries war narrative rather than ask questions.

Further Mr Putin gave the order to bring the country’s Northern Fleet to full alert in a snap combat readiness exercise Monday which put the USA on Defcon 3.

“New challenges and threats of military security demand the further heightening of military capabilities of the Armed Forces and special attention will be paid to the state of the newly formed strategic merging in the North,” Gen. Shoigu said.

The exercises will be held on land, in sea and air and will run for five days beginning March 16. Last week, Norway began its largest military drills in decades, in its northern Finnmark region near the Russian border. The exercises comprise 5,000 military personnel and will be held until March 18.

We are all being prepared for war, propaganda is rife and incessant. Remember though that although you our readers hear it at 180 decibel others are listening at 20 who are still asleep to the truth. It’s those people who will be hard to educate as they will be shocked out the norm reprogrammed to believe what their governments tell them.

I think our work has just become more intense which will escalate, that’s why its so important we all start to work as one and induce some camararderie amongst us. We should be grateful we are awake but sometimes I think it might be easier to be oblivious to what is happening, the frustration of seeing what is happening and knowing there’s not a lot you can do singularly. If we work together we are strong and we should really start looking seriously at collaborating.