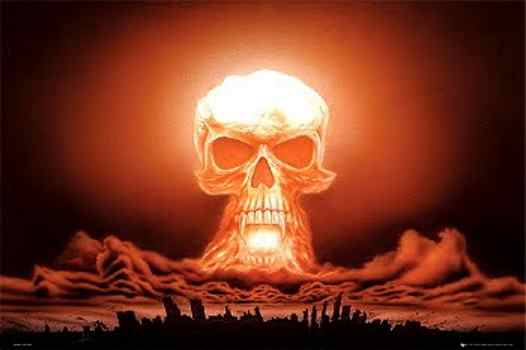 With the worlds attention now focused on Russia and the unexplained disappearance of Russian President Vladimir Putin, withspeculation at a fevered pitch about the huge “announcement”, along with military movement in Russia, ranging from war announcements to baby announcements to a military coup against Putin, it is noteworthy that Russia’s Dead Hand system, the ultimatedoomsday device, may still be in play.

Wiki explains what the “Dead Hand” system does:

Dead Hand is a Cold-War-era nuclear-control system used by the Soviet Union.General speculation from insiders alleges that the system remains in use in post-Soviet Russia. An example of fail-deadly deterrence, it can automatically trigger the launch of the Russian intercontinental ballistic missiles (ICBMs) if a nuclear strike is detected by seismic, light, radioactivity and overpressure sensors. By most accounts, it is normally switched off and is supposed to be activated during dangerous crises only; however, it is said to remain fully functional and able to serve its purpose whenever needed.

In 2009 ABC News described it as “A device that triggers a nuclear holocaust in the event of a U.S. strike against Russia.” According to Business Insider, that system may be aimed directly at the northern hemisphere. 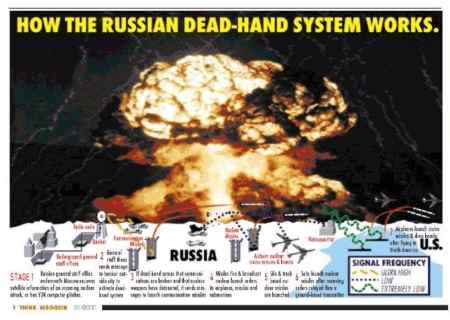 In January 2015, some disturbing comments were made by factions within Russia, with a former Russian general warning “world standson the brink of a “hot war,” not Cold War 2,” with The Inquistr reporting on “Russia’s nuclear weapons plan for the world,” and another report which ANP highlighted on January 8, 2015, where flamboyent Russian politician Vladimir Zhirinovsky, warned of WW3  happening after January 15, 2015.

The timing of Putin’s disappearance, not only being directly after the strange events surrounding the “Putin Death Hoax,” but coinciding with a recent report that due to an error, the UK’s nuclear weapons agency traffic was briefly routed through Russian telecom, makes us wonder exactly what type of information Russia became privy to regarding the UK’s and the wests’ nuclear preparations.

Other recent reports show that Russia has stepped up their military preparations, with NORAD expressing concern as evidenced by Adm. William Gortney telling the Senate Armed Services Committee on Thursday “Should these trends continue over time, NORAD will face increased risk in our ability to defend North America against Russian air, maritime and cruise missile threats.”

Gortney’s remarks came in written testimony submitted to the committee.

“This past year has marked a notable increase in Russian military assertiveness,” on the world stage, he said. Russian heavy bomber aircraft flew more patrols outside Russian airspace “than in any year since the Cold War,” though he did not offer a specific number. There have also been increased Russian air patrols across the coastlines of Europe.

The NORAD commander later said that Russian flights, even down the English Channel, are at a pace “that has not been what they’ve done in the past, even back with the Soviet Union.”

“We—the U.S. [Department of Defense]—haven’t been pursuing appropriate methods to counter EA [electronic attack] for years,” a senior Air Force official with extensive experience on the F-22 told The Daily Beast. “So, while we are stealthy, we will have a hard time working our way through the EA to target [an enemy aircraft such as a Russian-built Sukhoi] Su-35s and our missiles will have a hard time killing them.”

The problem is that many potential adversaries, such as the Chinese and the Russians, have developed advanced digital radio frequency memory (DRFM) jammers. These jammers, which effectively memorize an incoming radar signal and repeat it back to the sender, seriously hamper the performance of friendly radars.

Worse, these new jammers essentially blind the small radars found onboard air-to-air missiles like the Raytheon AIM-120 AMRAAM, which is the primary long-range weapon for all U.S. and most allied fighter planes.

With the US military being decimated, between funding and the purging of military commanders, and Russia having already proven the effectiveness of their electronic warfare systems, in conjuction with the newer reports mentioned above on the Pentagon and NORAD’s concerns about being outclassed militarily, what is left as an option for the US should war break out, would be a nuclear strike, which brings us right back to the chilling existence of Russia’s ultimate doomsday device and “Dead Hand.”

I, for one, am praying fervently that Russia’s “big announcement” is simply a baby announcement.