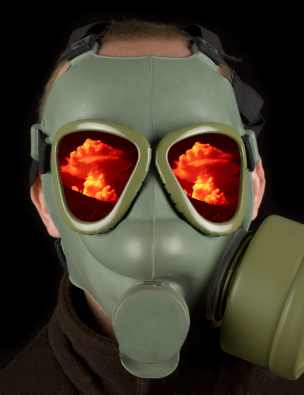 Editor’s Note: Despite the arguments that nuclear energy is a safe way to provide electricity needs for the population, we’ve seen in recent years that, sometimes, things can go horribly wrong. While evacuating and getting as far away from a nuclear disaster is always going to be our best bet, in some cases this becomes impossible. Officials overseeing the crisis may downplay the disaster or fail to alert local residents in time, or by the time the fallout area has been designated it may already be too late to get out. On top of that, any nuclear emergency evacuation alert will be met with mass panic and widespread traffic jams. We need only look at Hurricane evacuations to see how disorderly things can be. With most metropolitan areas having only a few key entry and exit points, there is simply no way to quickly and efficiently move millions of people out of a nuclear fallout zone.

RELATED : EMP American Blackout — Are you prepared for a major power outage?

We simply cannot downplay the threat posed by nuclear power plants, especially considering the sheer number of plants in operation (see map below). It’s a numbers game. In fact, there are numerous nuclear alarms that go off weekly in the United States alone. The San Onofre plant in southern California was recently taken offline due to a catastrophic failure of its generators and other components – it is offline indefinitely. And, at this time, though completely absent from mainstream media, the government is actively  shutting down nuclear plants in the United States as they come up for re-licensing, citing problems with nuclear waste.

On top of that, we have the proliferation of thousands of nuclear weapons all over the world, with several accounts in recent history suggesting that rogue terror organizations may have deployed suitcase bombs or dirty bombs in the United States. Whether real or imagined, the fact is that an enemy of the people of the United States may have their hands on a nuclear weapon and when the time comes, they may very well use it. Understanding that the threat is real is the first step to preparedness. Learning what you can do in the event of a nuclear event is the next step – and the one that can keep you alive while millions of others panic without an idea of how to deal with the situation.

Since the dawn of nuclear weapons, we have always been weary of a trigger happy world leader hastily pushing a nuke detonator. However, according to history the two worst nuclear events that have occurred were accidental. Chernobyl, being the first event, had a fire and explosion that released large quantities of radioactive contamination into the atmosphere, and spread over much of Western USSR and Europe. The second largest nuclear event is the infamous Fukushima Daiichi nuclear disaster that occurred in 2011.

Each day we are exposed to nuclear radiation, some naturally and some through un-natural means. Those of us who live close to nuclear power plants are exposed more than others.

Those that live near nuclear power plants should be especially concerned with nuclear disaster preparedness; especially individuals who live in areas where natural disasters (hurricanes, earthquakes and tornadoes) could damage the nuclear facilities. The map below shows all of the nuclear power plants in the U.S.  Many states are areas where natural disasters could quite possibly take out or damage a power plant. Are you ready for this?

We Are Affected Globally by Radiation

No matter where radiation leaks or disasters occur, they will affect us globally one way or another and we should be ready for them. Due to the Fukushima nuclear disaster, our food supplies, water sources, and even our health have become affected from the radiation dispersed. Radiation tests conducted since the nuclear disaster in Japan have detected radioactive iodine and cesium in milk, beef and vegetables produced in California . This video is a great source that explains how radiation gets into our food supply.

According to “Health Ranger” Mike Adams, even growing your own organic produce is no longer enough to guarantee food safety. “Only those who grow food in greenhouses will be largely protected from the fallout.”

How to Limit Our Exposure to Radiation

1# One of the easiest ways to minimize the effects of radiation is knowing where our food comes from and limiting our exposure to radioactive foods and water sources. Keep in mind that foods, especially seafood from the West coast will be the most effected by radiation.

2# Having an  electroscope that gauges how much radiation you are receiving daily can be a useful tool. A Kearny Fallout Meter can give daily readings of radiation levels in your area.

3# Thoroughly wash your produce. Despite arguments to the contrary, you can wash radioactive particles off of produce. Clearly if the plant has taken in the radiation through the roots, it is irrevocably tainted. Fallout, however, can be dealt with. Washing your food in baking soda or peeling the skin off is a way to avoid ingesting radiation. Calcium bentonite clay is another natural substance that actually absorbs radiation. Interestingly, calcium bentonite clay has a uniquely strong negative ionic charge. When activated with water it works like a strong magnet, absorbing anything with a positive ionic charge (i.e., toxins, pesticides, radiation). The clay captures these substances and removes them as it is eliminated or washed off.” To wash produce with Bentonite Clay: Mix 1 part Calcium Bentonite Clay to 8 parts of purified water in a large non-metallic bowl. Toss your produce in this clay water, making certain the produce is completely covered, and let it sit for 10 minutes. Rinse well with more purified water.

4# Also, by adopting an anti-radiation diet can provide natural alternatives to assist the body in ridding itself from exposure. Foods such as kelp, rosemary, spirulina, miso soup and niacin all assist the body in fighting radiation damage.  Other foods that may help in combating radiation sickness are foods that naturally detoxify the body. Foods that are high in potassium such as apples, oranges, pineapples and pomegranates are foods that are also good cancer fighters. Mushrooms are also a food source to add to your anti-radiation diet. Any mushrooms brown or black in color, and especially reishi mushrooms. Foods that are high in antioxidants will also assist your body in ridding itself of radioactive particles. Foods such as green and black teas (make sure that your tea is not from Japan), garlic, cumin, nettles, dandelions, ginseng, lentils, collards and mustard greens are also suggested.

6# If you are concerned about your water sources, use filtered water in everything, including brushing your teeth and sponge bathing. Purchase a reverse osmosis water filter with extra filtration cartridges. Remember, it is important to replace your filters after multiple uses. Drinking apple cider vinegar can also assist in flushing toxins and  radiation from the body. Baking soda and water is another option as it also flushes radiation and cleans the stomach lining. You can also put baking soda in dish soap, body soap, laundry detergent as the radiation will bind to the baking soda thus  neutralizes it.

7# Did you know that the Spiderwort plant is Nature’s gieger counter? This plant naturally has very dark purple flowers and when they are exposed to radiation or near an area where radiation is high, the flowers turn pink. Planting these in your yard will be a great way to know if you are taking in excess radiation.

8# Knowing in advance how much radiation you are  exposed to radiation through natural and un-natural means can help you calculate your annual radiation dose. To find this out, click on the Annual Radiation Calculator.

What if You Are Exposed to Radioactive Particles?

Radioactive ionic particles attach themselves to dust floating in the air. Therefore, it can be ingested, inhaled or absorbed through the skin. If you are told to evacuate or bug in due to a nuclear disaster, keep the following points in mind:

Symptoms of Radiation Sickness Include:

RELATED : Ex-US Agent Claims Military Thwarted Obama False Flag Nuke a total breakdown in society and with in one year the death of 300 million Americans /EMP Attack this Fall- (VIDEO)

Preparing for an Imminent Nuke Attack

If you are told to evacuate or bug in place due to nuclear attack or nuclear leak disaster, keep in mind that this type of disaster is survivable.  Even though it is difficult preparing for this sort of disaster, you can put some preparations in place. Many of the preparedness items are similar to the ones needed for other disasters.

You will of course need:

However, you will need additional supplies pertinent to a nuclear disaster. Some of these items include:

The thought of nuclear disasters is not something we like to think about. However, in order to be ready for these types of disasters means you have to believe that the possibility of a threat is there. It is possible to survive a nuclear disaster and fallout, but you must be prepared. Having all of your items prepared and in place before the disaster will keep your family or group safe and ready to bunker in more quickly.

This article has been generously contributed by Tess Pennington of Ready Nutrition. After joining the Dallas chapter of the American Red Cross in 1999 Tess worked as an  Armed Forces Emergency Services Center  specialist and is well versed in emergency and disaster management & response. You can follow her regular updates on Preparedness, Homesteading, and a host of other topics at www.readynutrition.com.

2 thoughts on “Preparing for an Imminent Nuke Attack: How to Survive When Others Won’t”